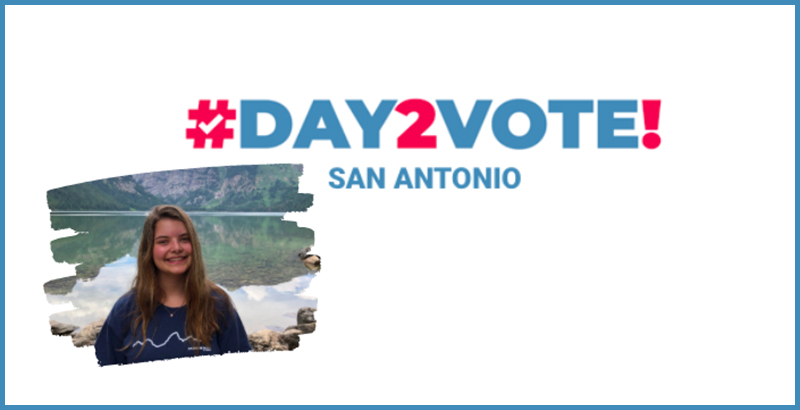 When 17-year-old Sarah Moorman learned that her summer internship with a youth civic engagement organization was cancelled due to COVID-19, she was disappointed, but not derailed.

She was still determined to tackle the issue of voter turnout.

Moorman knew that those who waited til the last minute to vote would still face a barrier on Election Day: work. Those who cast their votes before and after work, or on lunch breaks, may be put off by dangerously crowded polling stations.

She created a campaign, Day2Vote, that has so far led 52 companies representing a total of 14,889 employees to pledge full or half day paid time off for voting.

The momentum is a testament to the teen’s perseverance. Her original internship with Texas Rising would have involved more traditional civic engagement strategies, many of them dependent on face-to-face interactions. Her second idea, to join the fight for mail-in ballots, was also stifled as the issue works its way through the federal court system.

“After it became clear that wasn’t going to happen, I thought about other roadblocks to voter participation,” said Moorman, a San Antonio native. If people could not easily and reliably vote from home, it would be important to make polling stations safer. Early voting has already been extended in Texas to thin crowds, but wait times of over an hour at polling stations that are usually empty during early voting has many anticipating historic turnout leading up to November 3.

Moorman decided to target the business community with Day2Vote. She’s encouraging business leaders to commit to either giving employees the day off, or to offering flexible paid time off to visit a voting station while crowds are lighter.

Giving workers the day off is a favorite strategy of voting advocates. Several states already observe Election Day as a civic holiday, and in 2018 Vermont Sen. Bernie Sanders introduced a bill to make Election Day a national holiday.

In Texas, where a civic holiday is unlikely, several local leaders have spoken up in support of Day2Vote.

“No one should ever have to make the tough decision between a paycheck and voting,” said Jenna Saucedo-Herrera, president and CEO of the San Antonio Economic Development Foundation. “When employers remove that particular barrier, they empower their teams to get to the polls and exercise their civic duty.”

Any effort to increase flexibility in voting is more important than ever during the pandemic, Saucedo-Herrera said, “With Covid-19 impacting our world and how we approach in-person interactions, something has to change to ensure people feel safe and supported voting this year.”

Moorman’s father, Lew Moorman is an established entrepreneur in the San Antonio tech community. Using those initial contacts, Sarah Moorman said, she was able to get some early momentum as the tech companies spread the word. One of the city’s largest employers, USAA, has agreed to participate, Saucedo-Herrera said.

Voter participation has been slowly increasing in San Antonio over the past decade. In 2014 it had the lowest turnout of the 22 largest cities in the U.S. However, recent efforts by groups like MOVE Texas and the Texas Organizing Project, yielded significant increases. However, voter turnout is still lowest in the areas with highest poverty, and most major employers in those areas have not publicly committed to giving employees flexibility to vote.

“The feedback has been interesting,” Moorman said, “Many say it is a no-brainer and they love the idea, and others are hesitant because of the potential financial impact or they feel the extra early voting days this election year is already sufficient.”

Texas does allow paid time off to vote, if a worker’s schedule does not allow at least two consecutive hours while polls are open. But Bret Piatt, CEO of Jungle Disk, a San Antonio-based tech company, said that law doesn’t create added flexibility for most workers, as relatively few shifts would preclude voting entirely. They just have to squeeze it into their hours off.

He’s participating Day2Vote by giving his employees whatever time they need, paid, to go vote. Ideally it would be two hours, he said, but if they need more, if it takes several visits to the poll to find a time without a crowd, he’ll give that to them. That’s flexibility salaried workers have built in at Jungle Disk, but he wants his hourly customer service representatives to have it as well.

“I don’t think it’s fair to say that because you’re on shift work, your right to vote isn’t the same as a salaried role,” Piatt said.

While Piatt said that early voting does help create schedules that work for everyone, he believes in removing all potential barriers. ““This democracy we have will be as good as the participation we can get.”

Piatt is also an industry partner with San Antonio Independent School District’s CAST Tech High School. Jungle Disk provides internships and Piatt advises the career-themed high school on certifications and courses they can offer to help students be more competitive in the tech industry upon graduation.

This gives Piatt regular interaction with young people, and he sees civic engagement increasing as students read, listen to podcasts, watch political videos on YouTube, and find like-minded interest groups through social media. “It might just be that there’s a broader availability of information out there,” he said. Kids aren’t limited to the interests and passions of their classmates, they can connect to national and international groups concerned with climate change, gun issues, and, as in Moorman’s case, civic engagement.

“I do feel that because of social media, my peers are more knowledgeable and therefore more interested in politics and voting,” Moorman said.