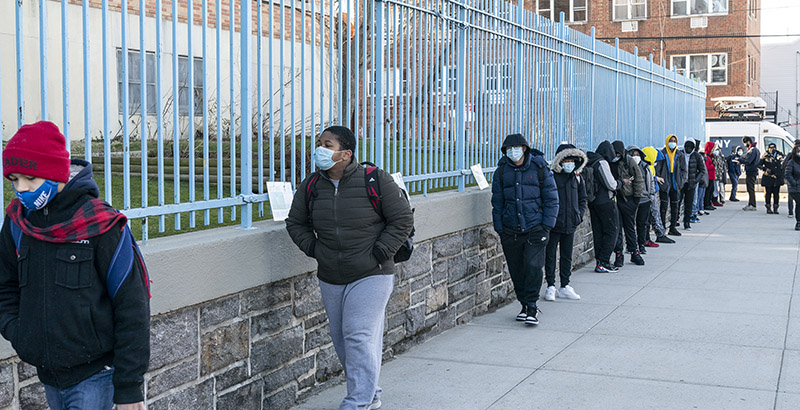 Students outside of Richard R. Green Middle School in the Bronx. (Getty Images)

In April, results from New York City’s 2021 specialized high school exam were released, and the percentage of Black and Hispanic students receiving offers to the “Big Three” — Bronx High School of Science, Brooklyn Tech and Stuyvesant High School — was abysmally low. Just eight Black students were admitted to Stuy, down from 10 last year, which had been an improvement from seven in 2019. It bore out a 2019 story in The Atlantic that described “the uncomfortable truth that … the New York City public school infrastructure seems designed to produce … a different year, a different byline, the same problem.”

As always, this news sparked debate about the state’s Hecht-Calandra law, which mandates that the test be used as the sole criterion for admission to the three schools. But this argument, though important and heartfelt, masks a much bigger problem: The city’s middle schools have utterly failed Black and Hispanic students. In the 2018-19 school year, just 36 percent of the more than 41,000 Black and Hispanic sixth-graders (who are now about to graduate from eighth grade) scored as even basically proficient on New York State’s English Language Arts exam. In math, the number was 29 percent. The state can tinker with the specialized high school entrance criteria, but at the end of the day, over 26,000 Black and Hispanic middle schoolers are not reading or doing math on grade level.

Any serious conversation about equity needs to address this much more urgent problem.

As of 2017, the city Department of Education operated 267 middle schools, of which 176 served at least 75 percent Black and Hispanic students. At only three of those schools — Mott Hall I, Mott Hall III and Jonas Bronck Academy — were the median ELA and math scores in the 50th percentile or higher. The next mayor’s plan to tackle this failure is far more urgent than his or her stance on Hecht-Calandra. Here are three things he or she should do right away:

Moneyed parents know they can buy their way into a good public school. At PS 6 on Manhattan’s Upper East Side, kids design their own solar cookers, 87 percent are reading on grade level and the PTA raised just under $1 million in 2018-19. Less than 2 miles away, at PS/MS 57 in East Harlem, 93 percent of the students are economically disadvantaged and only 28 percent of lower schoolers read at grade level. Its PTA raised just over $20,000 last year. The median annual rent for families at PS 6 is almost $58,000 more than median annual rent for PS/MS 57. PS/MS 57 is also zoned for parts of two public housing complexes; there is no public housing zoned for PS 6.

This is not to celebrate PS 6 or to degenerate PS/MS 57. Education advocates agree on few things, but one is that running a high-poverty school is profoundly more difficult than running a school for affluent kids. When a sizable number of students coming to the building are housing insecure, it’s hard to get to the point where they’re designing solar cookers. For wealthy parents, paying an additional $58,000 per year to be zoned for PS 6 doesn’t just purchase an eco-center; it buys the guarantee that their kids will be insulated from the messy realities of poverty.

The city may never fully be able to stop rich parents from hoarding access, but it shouldn’t enable it. The housing/school connection has deep historically racist roots; school zones often track closely with federal housing redlining maps. Ending residential assignment where it concentrates resources is a step in the right direction. Case in point: Far more low-income students gained access to coveted high schools in Manhattan’s exclusive District 2 once geographic screens were removed.

A defining feature of Mayor Bill de Blasio’s administration has been its narrow view that, as Ray Domanico wrote in City Journal, “educational quality could not be expanded, but only redistributed.” Parents scramble to get their kids into gifted-and-talented programs or a specialized school because they see them as a golden ticket, one of the few exits from a failing system for families who can’t buy their way out. It doesn’t have to be that way. For example, in 2017, 82 percent of the students in the Bronx’s District 11 were Black and Hispanic and 74 percent were considered economically disadvantaged. There were 3,010 sixth-graders, but only 89 of them went to Jonas Bronck, a selective school. Do we really believe that fewer than 3 percent of the students in this district could do the work there?

Creating additional good schools requires more scalpel than sledgehammer. In racially and socioeconomically diverse District 15, which covers Brownstone Brooklyn, eliminating middle school screens makes sense, since integration limits resource hoarding. But this approach wouldn’t work in District 11, which is mostly Black and Hispanic and has a higher concentration of poverty. There, the creation of more screened schools like Jonas Bonck would serve to give more access to the poor.

Opponents of creating more charters or selective schools argue that this defunds neighborhood schools and leaves other students behind. Interestingly, this concern seems only to extend to choice for lower-income families of color, who, unsurprisingly, overwhelmingly support school choice. Indeed, some of the most prominent critics of school choice have sent their kids to private schools or selective public schools. The rich and connected actually also believe in school choice — for other rich and connected people.

Recruit and support top talent to lead our schools

There are plenty of nonselective schools, traditional and charter, that very effectively serve high concentrations of low-income students. The common thread: leadership. A recent study found that it is “difficult to envision a higher return on investment than the cultivation of high-quality school leadership.” This is particularly true for Black students, the only group to be “intellectually starved … as a result of public policy, since Black principals positively impact the performance of Black students.

The most effective way to create good schools in poor neighborhoods? Put the best leaders in charge of those schools. The next mayor should make it his or her mission to cultivate and recruit the top instructional leadership in the country. The Yankees, for example, grow talent from within and also attract the biggest stars. New York is the biggest, baddest city in America, and running a high-quality school in a high-poverty district is a tough job. With city schools about to receive Scrooge McDuck money, there is no smarter investment than a leadership talent pipeline.

The pandemic exacerbated the divide in the city’s school system, but as the Stuyvesant debate illustrates, all these issues pre-date COVID-19. The new mayor will have a choice: make investments that will create more opportunity, or pander to existing interests and double down on unsuccessful policies. The lack of diversity at the specialized high schools is unacceptable, but it’s a symptom of a much more urgent underlying problem. Let’s hope the next mayor has the courage to truly address the issue.

Arthur Samuels is co-founder and executive director of MESA Charter High School in Brooklyn, NY. Follow him on Twitter at @arthur_samuels