Sahm: Newark’s Charter Schools Deliver on Their Original Purpose — and Spark Innovation Across the District 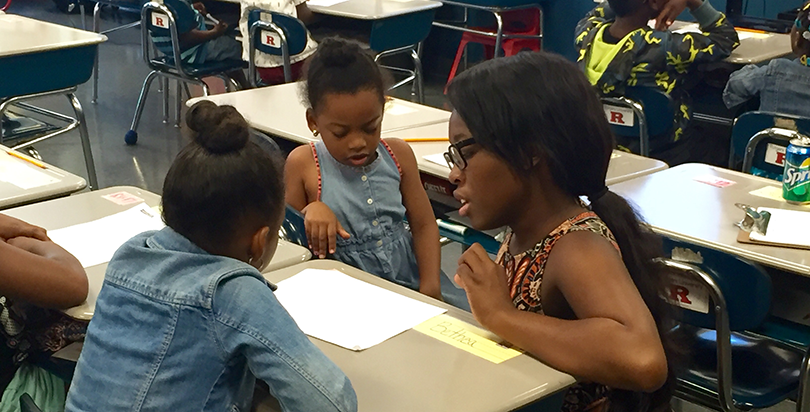 This essay originally appeared at NJ.com
It’s often noted that the original vision for charter schools, championed by legendary teachers union leader Al Shanker and others, was that they’d be “laboratories of innovation” whose lessons could inform the broader system. It hasn’t worked out that way. Instead, the relationship between charters and district schools has been acrimonious and competitive. But in Newark, New Jersey, quietly, with little fanfare, a course is being charted back to that original vision.
In recent years, some districts have attempted to improve charter and district collaboration, but efforts often don’t go much beyond public relations. But Newark — under the leadership of Mayor Ras Baraka, Schools Superintendent Chris Cerf, and the school board, which should soon assume control of the city schools after two decades of state control — has found a way to forge authentic charter/district collaboration where it really counts: at the teacher-to-teacher level.
For example, this summer Newark Public Schools is operating an innovative literacy program for 750 rising second-graders who are behind in reading. The district identified all students reading below grade level and urged parents to sign their children up via letters, emails, and phone calls.
It recruited the strongest reading teachers to staff the effort. And the district decided to partner with the Uncommon Schools charter network to train the teachers in a literacy program that has shown good results in Uncommon’s 13 North Star Academy schools in Newark, particularly its Alexander Street School.
At the behest of former Newark schools superintendent Cami Anderson, Uncommon took over the troubled Alexander Street School, which was among the lowest-performing in the state. It was the network’s first school turnaround. (Uncommon, like most charter networks, prefers to start with young students and build out one grade at a time.) North Star Alexander Street reopened as a K-4 school in autumn 2014. (The old school was K-8; fifth-, sixth-, and seventh-graders were given preference to enroll in the district or charter school of their choice via Newark’s common enrollment system.)
The majority of Alexander’s K-4 students returned, many of them years behind grade level in reading and math. So Uncommon enhanced its normal curricular materials with an intensive program designed to catch students up — and catch up they did.
Although a direct comparison with previous years isn’t possible because New Jersey switched tests and some students exited the school, Alexander students performed exceedingly well on the 2015 PARCC exams. Fourth-graders boasted proficiency rates of 60 percent in English and 70 percent in math, beating the state averages of 51 percent and 40 percent, respectively. (Scores further increased in 2016, with 70 percent of Alexander third- and fourth-graders proficient in English and 75 percent in math.)
North Star Alexander Street’s 2015 results attracted the attention of new schools superintendent Chris Cerf, who came to visit. Cerf told Uncommon officials that he wanted “to bottle” what the school had done and share it. A growing partnership with the district has emerged.
Last month, I attended an all-day professional development session where 60 Newark district teachers who’ll be leading the summer intervention were trained in Uncommon’s “Great Habits, Great Readers” program. An interesting aspect of the workshop, besides the fact that it was happening at all, was that a casual observer would have never known that the two teachers leading the session were from a charter network.
The words “Uncommon” and “charter” weren’t used. Test scores weren’t mentioned. Rather than present their literacy program as holy scripture, the Uncommon instructors — aware that many district teachers in the room had decades of classroom experience — encouraged teachers to share their knowledge and experience. The workshop focused solely on effective literacy instruction for struggling readers.
Uncommon School’s partnership with the Newark public schools offers an example of true district/charter collaboration. Uncommon — which the Center for Research on Education Outcomes at Stanford University recently cited as one of the nation’s most effective charter networks — is hoping to build similar efforts in Camden and other cities where it operates.
With the country bitterly divided on so many issues — including education and charter schools — the work Uncommon is doing to build bridges with district schools is an optimistic sign that a Charter Schools 2.0 reboot is possible: one that recalls the original vision of innovation and collaboration. Here’s hoping. It’s time for a truce in the ed wars.
Charles Sahm is director of education policy at the Manhattan Institute, a think tank whose mission is to develop and disseminate new ideas that foster greater economic choice and individual responsibility.
Submit a Letter to the Editor
July 23, 2017