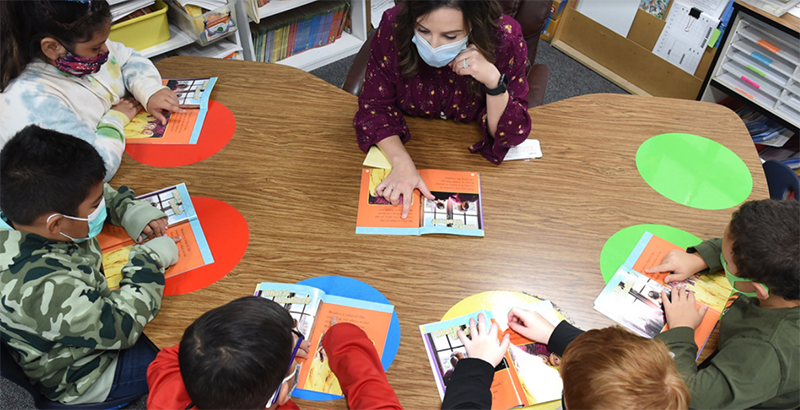 Guided reading is a success at Lincoln Elementary, part of the Kingsburg Elementary Charter School District, where students in a small-group setting individually read a text, selected at their instructional reading level. (John Walker)

During Kelsi Iturralde’s 45-minute guided reading session on a recent Monday, six students at a time sit with her at a kidney table while the rest of the class “whisper reads” at their desks.

“I tell them not to read at the same pace that your neighbors are reading, not too loud that we’re distracting someone, but just enough that you can practice your reading voice,” the second grade teacher at Lincoln Elementary School says.

“So we talk a lot about how to make our reading sound like a storyteller’s voice, you know, if there’s an exclamation point we want to sound excited, or if the characters are upset, then our voice sounds upset.”

At her table, students don’t just jump into reading.

“It also gives me a chance sometimes to introduce some of those harder words,” she said. She does a round of flashcards with vocabulary words with each student, which she said helps make reading less daunting.

“They’ve got a general idea of what the book is, and it helps just make it a little bit more accessible.” She is seeing that after returning to a classroom from being home during the pandemic, more students are behind, socio-emotionally and academically.

“There’s definitely a larger deficit in academics than there has been in the past,” Iturralde says.

Iturralde has worked at Kingsburg Elementary Charter School District, a five-campus district in the rural Central Valley of California, for seven years.

But that’s where Kingsburg Charter stands out.

The report looked at achievements in what the coalition calls a “key subset” of students — low-income Hispanic/Latino third graders.

The report pulled data from the California Assessment of Student Performance and Progress, a statewide student assessment system.

No testing took place in 2020, so the scoring is based on the prior two years. Because Hispanic students make up 43% of the state’s K-12 enrollment and are less likely to have outside learning supports, the results are clearer about how effectively schools teach reading, according to the coalition.

“We believe that better results for these students almost certainly mean better reading instruction for all,” the report read. And Kingsburg Charter has seen its scores improving for years. In the 2014-2015 school year, only half of all students were reading at or above proficiency level, according to school data provided by the district.

For low-income Hispanic students, that number was a dismal 39%.

Then something changed, said Melody Lee, the district’s learning director. About six years ago, the school began working with educators around the region to train all the district’s teachers in guided reading, which greatly supports English Language Learners.

The vast majority of ELL students in the district are Hispanic.

The program was called Focus on Early Literacy.

The following school year, 2015-2016, the district’s overall score jumped to 61%, and the low-income Hispanic student group also rose by 10 percentage points to 41%.

Scores continued to increase steadily, and as of 2018-2019, 66.39% of students were reading at or above proficiency, including 58% in the low-income Hispanic subgroup.

It took a lot of training on the part of teachers to implement new strategies, Iturralde said. Most of that focuses on a concept called guided reading, where a teacher supports students reading more challenging texts. Teachers and administrators say Kingsburg Charter is more likely to be successful because of its “cohort-style” schools, which benefits students and teachers.

“Our principal really wanted to make sure that we understood it, and we were shifting gears to help these students and make them strong readers,” she said.

“So we would have training days, I would say, probably once a trimester, so at least three or four times a year.” The training wasn’t just for teachers either, Lee said.

Administrators and paraprofessionals were also taught “how to use supplemental resources to enhance what was happening in our guided reading groups.”

For example, students answering “who, what, when, where, and why” questions before reading are practicing comprehension strategies.

Working in small groups with a teacher is a way to help kids progress in their reading development, according to Melanie Sembritzki, the Assistant Superintendent of Curriculum and Instruction.

“Student engagement is a key component of guided reading, and all students participate in simultaneous reading, talk about the story together, and ask and discuss questions,” she said.

“There is more time for students to actually do the work, in this case, read, rather than the focus on the more traditional, round-robin style of reading where students spend a lot of the reading time waiting for their turn to read.”

The official guided reading program was designed by two college professors with classroom teaching experience but has evolved to mean providing a child support while encouraging them to read more challenging texts, according to Steve Hart, a professor of literacy, early, bilingual and special education at Fresno State.

“The idea is that the teacher serves as a coach, or a support, during the actual reading process, providing students feedback and prompts at the moment of need,” he said. “So rather than having the student just reading and then taking a test and then we look at their results …. guided reading is really designed to be at the point of need, and the teachers, they’re supporting the kids as they’re actually engaged in the act of reading.”

Hart said students can receive more targeted support that way. Guided reading is one of the tools that are emphasized in the literacy education program at Fresno State, he said. Hart said typically, in second grade, students are building off their development of oral language and beginning to connect how speaking can be represented through printed symbols.

“So now we start to see them learning the skills of taking what they already know about language comprehension, and then applying that as they’re making sense of these written symbols, or as they’re decoding and engaging with stories in that way.”

One aspect he wishes schools would focus more on is thinking about “the cultural resources that kids and families bring to the education in the classroom,” he said.

“So understanding who kids are as people. Like, what are their family backgrounds, what kinds of literacies do they use within their families?

What kinds of cultural experiences do they have, and how can we build those into the kinds of things we’re teaching them and the kinds of books we’re reading?”

English language learners in Iturralde’s class get extra curriculum time that focuses on how they can show what they know, but in their non-native language.

“We don’t want that language to be a barrier,” she says, “so trying to support them and also still celebrate language differences is what we really hone in on.”

When intervention is needed

Lee, the learning director, says the district is lucky enough to be able to hire paraprofessionals to work on reading with students in the classroom and one-on-one. Iturralde says she has a handful of students getting extra help with reading, including some who are using RTI or Response to Intervention. “If I notice that a student is really struggling to decode words or they’re making the same mistakes over and over, and my teaching isn’t helping them get to the level that they need to be, then I’ll have them do RTI,” she said. Sometimes she’ll go to other second grade teachers at the school and ask for suggestions, she said. “We’re really great about sharing resources here, and if that’s still not working, that would be the point where I might reach out to the parents and then our intervention team on campus.”

Lee and Iturralde say their charter schools’ cohort-style learning is a huge benefit for students and teachers. Lincoln Elementary, for example, houses only second and third grade classrooms.

There’s a transitional kindergarten and kindergarten campus and a fourth, fifth, and sixth grade campus. Iturralde and the other eight second grade teachers at her campus meet weekly and share ideas.

She believes having a group of others with different amounts of experience is valuable when they have a goal in mind, such as bringing up reading scores.

“With a team so large, there’s really just a strength in numbers,” she said.

“Having that variety of skills brings out the best in everyone.”

“They’re sharing best practices, and they’re talking about some of the things that they’re trying that might be pushing kids to that level, or maybe they’re stuck, and they have a group of kids that they’re really concerned about that haven’t been making progress,”

Lee said. “So it’s kind of like a gold mine of everybody together in one place with common goals.”

‘Behind’ during COVID-19 pandemic

Sitting at his desk, he listed off all the books he’s read: The “Magic Tree House” series, “Fly Guy vs. the Fly Swatter,” “Pete the Cat.”

“I get new books every week,” he said.

Iturralde says she notices students are excited to be in class again and visit the library and do other hands-on activities.

She says despite the academic gaps, the curriculum has stayed the same as in years past, “but having to make decisions at every level means sometimes recreating how we make the curriculum accessible, and so maybe we have to teach it a little bit different than we had in the past.”

Hart said he wouldn’t call students “behind” due to the pandemic.

“Because if you think about the guided reading approach, it really emphasizes the idea of (finding) where students are and building them up and urging them to continue to grow.”

Teachers and parents will struggle if they push students into what they believe is grade-level work instead of meeting them where they are, he said.

Although parents and teachers can recognize that a lot of children didn’t get the expected lessons or skills that they were hoping for because of the pandemic and distance learning, “Let’s find out their abilities,” he said.

“And now we can use interventions to support where we find that they need that support.”

This originally appeared at The Fresno Bee and is published here in partnership with the Solutions Journalism Exchange.