Ruben Diaz, Jr., the Up-and-Coming Bronx Leader Who Just Might Be NYC’s Next ‘Education Mayor’

Bronx, New York
When his career as Bronx Borough President is all said and done, Ruben Diaz, Jr., envisions himself, perhaps, standing at the front of a classroom, nurturing young minds.
On the other hand, the 42-year-old rising star in New York political circles might just have his eye on City Hall.
The widely discussed possibility of a Diaz, Jr. bid to become New York City’s first Hispanic mayor gained some traction after his Feb. 18 State of the Borough address, in which he touted his efforts over the last seven years to polish the image of the city’s poorest borough and expand opportunities for the Bronx’s 1.4 million residents.
Some of the highlights of his tenure since 2009, as noted in his speech: 23,000 new housing units, an invigorated workforce, reduced crime, and partnerships with the technology sector, including the “Code/Bronx” initiative launched in late 2015, which is aimed at creating computer science programs in every Bronx school.
He’s pitched ambitious proposals to rebuild the Bronx’s historic Orchard Beach, off the Long Island Sound, and develop a platform at three railyard sites to accommodate new affordable housing, retail and an expansion of Lehman College. If he has his way, the state Legislature will approve a plan for four new Metro-North stations spanning the borough.
Diaz also used the speech to distinguish how his approach diverges from his fellow Democrat, Mayor Bill de Blasio, on key issues like education.
In an interview the next day, Diaz told The Seventy Four that he considers it his job to help transform the way Bronx residents think of themselves and their borough, not to mention its reputation to those who live outside its borders. Education is at the core of that effort, he said.
“We’re trying to create jobs and we are; we’re creating housing, we’re fixing our parks, we’re trying to reduce crime,” he said in the interview. “All of this is for the future of the Bronx. And you can’t have people benefit from that unless our students are educated. And unfortunately with all the things that you heard me brag about in my speech, and all the things that I go around and say, all the wonderful work … I can’t do that in two areas — I can’t do that in health and I can’t do that in education. Not yet. And it’s frustrating.”
The reason, according to Diaz: “I just think that there hasn’t been that level of priority yet at different levels of government to really zone in in areas like the Bronx, at least academically. And that’s always an uphill battle. It always has been.” 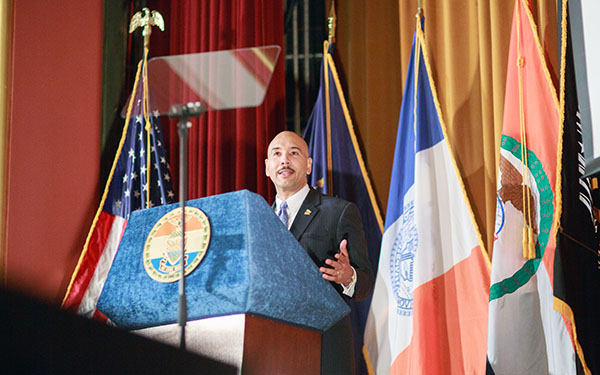