Appraisal: How Paymon Rouhanifard Rallied Camden Around Its Schools — and Why His Impressive Turnaround Will Endure 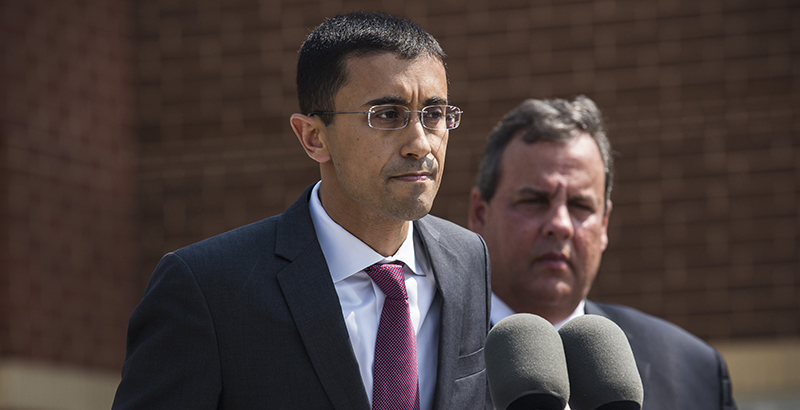 C amden Superintendent Paymon Rouhanifard informed New Jersey Governor Phil Murphy last week that he would be stepping down from his post at the end of the school year. As someone who has followed the trajectory of Camden Public Schools for the last decade, I’m sad about the loss of this gifted leader who relentlessly prioritizes the needs of schoolchildren above institutional stagnation. But I’m also confident that Camden’s rise in academic achievement will continue, because Rouhanifard’s reforms are deeply entrenched throughout the city.

For families who see the difference five years makes, there’s no going back.

Here’s a quick timeline of how far Camden has come:

In 2008, 87 percent of Camden High School students failed the math portion of the HSPA, our old easy-peasy diploma test, now replaced by PARCC.

In 2009, the state suppressed high school standardized test scores because more than 90 percent of students failed.

In 2011, students were attending school in outdated facilities, with half of the District’s buildings constructed before 1928, and many falling into disrepair.

In 2012, New Jersey published its list of the state’s 75 lowest-performing schools, called “Priority Schools”: Twenty-three of Camden’s 26 schools received that designation, despite an annual per-pupil cost of over $25,000. Earlier that year, the Camden School Board commissioned an independent Needs Analysis. The report (alas, no longer online) described a “broken system” where “instructional rigor is low across the district. During the [classroom] walkthroughs we conducted, we found that the vast majority of lessons operate at the lowest levels of rigor.” The school board, the analysis continues, is “at best, disinterested … the policies, systems, processes, and structures needed to educate children in a mid-size urban district are loosely formulated, misaligned, poorly implemented, or simply non-existent.”

In 2013, among all the Camden students who took the SAT, a total of three students achieved a college-ready score.

Enter Paymon Rouhanifard, who came to this country at age 5 with his parents and brother after fleeing religious persecution in Iran and living in Pakistani refugee camps. The family settled in Nashville, where his father pumped gas. Rouhanifard learned English, graduated from the University of North Carolina at Chapel Hill with a B.A. in economics and political science, and taught sixth grade in Harlem as a corps member of Teach for America. In August 2013 he was appointed by Gov. Chris Christie as Camden superintendent right after the state takeover of the district.

What’s happened in Camden Public Schools over the past five years?

● Only eight Camden schools are on the list of New Jersey’s Priority Schools.

● School suspensions have dropped by 53 percent.

● The state is building a $136 million state-of-the-art high school campus to replace the century-old building, which will open by 2021 and serve 1,200 students. Eleven schools have undergone significant renovations, and there are three brand-new K-8 schools (in the Lanning Square, Whitman Park, and Cramer Hill neighborhoods). The state has invested $336 million in school buildings since 2012.

● Camden families enroll their children in the schools of their choice — traditional, renaissance, and most independent charters — through a universal enrollment system.

With all due respect to Superintendent Rouhanifard, he didn’t accomplish these feats alone. The turnaround in Camden owes much debt to parents who were eager for a change from pre-Rouhanifard days, when, for example, Superintendent Bessie LeFra Young left Camden in disgrace in 2012 after she recorded 186 absences over a period of 18 months. And for those in the eduwonk bubble who wonder whether adhering to the twin pillars of choice and accountability can reform a district, there’s no better example of success than Camden.

As you can see, I am a parent who wants the best for my children. I don’t want them to do what I did — to drop out in 10th grade. I want them to do well in school, graduate, go to college and have a shot at a good job. I think every parent does. Now that my kids are in Mastery schools, I feel like they have a real shot at success.

To Bri, a mother of three from Cramer Hill who sends two of her children to Mastery (and didn’t want her last name used because she didn’t want to be perceived as insulting District teachers):

The way they teach seems more sophisticated so I think it’s changing for the better. I was going to take them out of this school before I heard it was turning into a charter.

I have lived in Camden all my life. I am the product of the Camden School system. But a few years ago I had no hope. My daughter was struggling in school and not getting the support she needed … My daughter started liking school for the first time and I had hope again.

To Phillip Lopez, dad of a first-grader:

When my son Nathan was turning five I was searching for a school that would give him a firm educational foundation. Honestly, I was not expecting to find it up the block from my house.

“I think it’s great, and she says she loves it,” said Pesante, noting her 5-year-old, Symelia Shields, had run back to hug her teacher.

I’m a mom of four, and so maybe that’s why I find parent voices so compelling. Truth be told, these parents, among many who share similar sentiments, are more responsible for Camden’s improvements than Rouhanifard; without their support, the public schools in this city would still be grim because the reforms wouldn’t have gained any traction. This salient truth won’t get in the way, however, of Camden school reform detractors, specifically Camden teachers union president Keith Benson (who believes that school reform is a conspiracy among money-grubbing reformers and “oppressed natives”) and his fellow travelers from groups like Save Our Schools NJ.

No doubt these adult-centric regressives will exult in the opportunity to seize control once again in order to counter advances in choice and accountability. No doubt they’ll pin their hopes on the symbiosis between Gov. Murphy, who will choose Camden’s next superintendent, and NJEA.

Indeed, the only hint we have of Murphy’s view of Rouhanifard’s track record is in this interview: “I sat with Paymon,” Murphy says, “and I am impressed by him. I respect him.” But much is riding on whom Murphy selects as the next superintendent. It’s worth noting that the deputy superintendent of Camden is Katrina McCombs, who has spent 20 years as a Camden teacher, principal, and head of early childhood education. She’s currently in the role of superintendent because Rouhanifard is on paternity leave with his newborn daughter. Heck, McCombs even graduated from Camden High 30 years ago!

What do you say to a little continuity, Governor? No one wants to return to the bad old days of turmoil and deterioration, of days when superintendents cycled through the city like Metrocards at a subway turnstile. No one wants to see progress thwarted when so much is at stake. Benson would say, “It’s adult jobs at stake,” by which he means union jobs. (Charters and renaissance school teachers can unionize if they want, but only one has in Camden: LEAP Academy Charter School.) Parents would say, “No, it’s our children’s future at stake.”