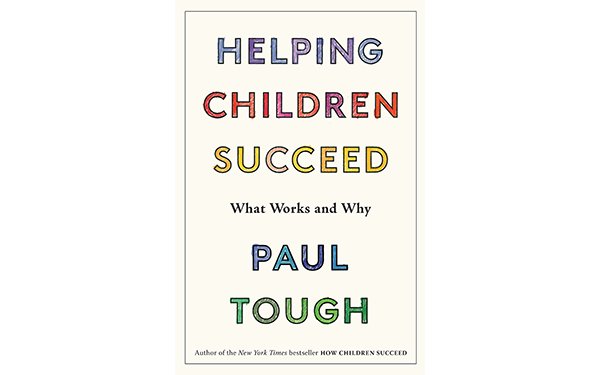 The mystery of Paul Tough’s new book Helping Children Succeed is how something with so many of the right ingredients — good intentions, good research, good writing — could go so wrong.

The chief problem is that Tough aims to address poverty but ignores the most straightforward method for doing so. Meanwhile, some of Tough’s preferred interventions have promise but by presenting an uneven view of the evidence he doesn’t always make a successful case for them.

The book is a mess conceptually and a mixed-bag empirically.

Helping Children Succeed is a follow-up to How Children Succeed, the bestseller that popularized the term “grit,” among other so-called non-cognitive skills — social and emotional abilities that contribute to success academically and in life but aren’t fully measured by standardized tests.

The new book is a brisk read at just under 120 pages, and in some ways is more ambitious than its predecessor, aiming to determine “what works and why” in helping poor kids achieve.

“Researchers have concluded that the primary mechanism through which children’s environments affect their development is stress,” Tough writes. “Certain environmental factors, experienced over time, produce unhealthy and sustained levels of stress in children, and those stressors, to an extent far greater than we previously understood, undermine healthy development, both physiological and psychological.”

Tough highlights interventions that he believes will ameliorate these challenges: home visits for poor families to improve parenting, better and expanded early childhood care and education, quality professional development for teachers, emphasis in schools on a “growth mindset” (the belief that one’s intelligence and ability can be consciously developed), adoption of “student-centered”–type pedagogies, and programs to help high schoolers develop self control.

But in a book with frequent claims that “the science tells us,” “psychologists say,” “studies have found,” and “research shows,” readers need to have confidence in the author’s command of the evidence. On some issues, though, Tough comes across as an unreliable narrator.

For instance, he praises “student-centered” pedagogical methods that emphasize “deeper learning” designed to “meet the demands of the 21st century American economy.” The research base for this approach is quite thin, though Tough does marshal a couple of (relatively unpersuasive1) studies in its favor.

He simply ignores the large literature showing the efficacy of teacher-led direct instruction, however, as well as E.D. Hirsch’s work on the importance of gaining a deep and specific body of academic knowledge2 — an approach that might not easily mesh with Tough’s preferred methods. Nor is there reference to studies showing mixed or disappointing results for student-centered instructional practices, particularly for struggling students.

Similarly, although Tough’s discussion of financial incentives — which he concludes are generally ineffective — highlights important research, it could have also included findings from several studies that have shown more promising results particularly for high school and college students.

Meanwhile, Tough seems to dismiss No Child Left Behind and Race to the Top as flops,3 but the evidence on the former suggests positive results in math and claims about the latter are premature absent rigorous research.

In some ways the biggest problem with the book is what’s not in it, rather than what is.

In the last chapter, Tough acknowledges that he has focused on small-scale interventions. But he doesn’t explain this decision, which is an odd one considering the scope of the problem and Tough’s ambitious goals. He almost completely ignores several policies that have been scaled to some degree and for which there is a fairly large, generally positive body of evidence: spending more money on education generally and particularly in low-income schools, integrating schools by race and class, expanding charter schools in urban areas, and holding schools accountable for poor performance.

But the biggest elephant in the room is addressing poverty by, well, addressing poverty: that is, giving low-income families money so they are no longer poor. Tough nearly stumbles into this point frequently, but somehow never confronts it directly.

For instance, he describes how poor parents sometimes struggle to create firm and stable relationships with their children, saying: “Parents who are under a lot of stress, because of poverty or other destabilizing factors in their lives, are less likely than other parents to engage in the kind of calm, attentive, responsive interactions with their infants that promote secure attachment.”

The best antidote for this kind of stress would seem to be to reduce its cause — poverty, as Tough notes — yet he calls instead for dispatching trainers “to support and counsel disadvantaged parents in ways that make them much more likely to adopt an attachment-promoting approach to parenting.” Perhaps such a program has promise in certain circumstances, but Tough’s instinct is to see hoofprints and think zebra.

Near the end of the book, he writes, “But what the research I’ve described here makes clear is that intervening in the lives of disadvantaged children — by educating them better in school, helping their parents support them better at home, or, ideally, some combination of the two — is the most effective and promising anti-poverty strategy we have.”

In fact, virtually none of the policies Tough advocates are truly anti-poverty strategies; they are strategies to make poverty a little less awful or to allow some children to escape poverty eventually. By definition, poor students are still poor even if they attend schools focusing on deeper learning or their parents receive home visits or they develop grit.

Incidentally, there is a robust literature on how direct anti-poverty policies affect children —  most of it suggesting that programs to give families cash or cash-like benefits have positive effects in both the short and long term.

Food stamps help children’s health. Increases in the minimum wage also have been linked to improvements in infant health. Many of these policies have been implemented at significant scale and expansion would mostly be straightforward from a policy perspective.

I’m hardly the first to point out that direct anti-poverty programs, not education, are probably the best way to fix poverty, which makes it all the more surprising that Helping Children Succeed doesn’t address this point.

Still, one might object on political grounds: of course we should address poverty directly, the arguments goes, but politically such efforts are dead on arrival.

Perhaps — though I would note that the U.S. has been successful in reducing elderly poverty through Social Security, the popular policy of simply mailing people checks. And the political environment for addressing poverty is not entirely independent of high-profile books about addressing poverty. Nor is the book titled Helping Children Succeed Within Current Political Confines.

In any event, Tough’s recommendations are not tethered to political reality. Many of his favored policies, like expanding home visits to poor families and early childhood education, would be expensive and politically challenging to scale.

Tough is right that high-quality education is critical for all children, but it’s also true that one of the best ways to help children succeed is to ensure, through policy, that they’re not poor. That Tough doesn’t speak to this fundamental point says a lot about the prevailing poverty discussion.

Schools need to take kids as they are, but policymakers, and the writers giving them advise, don’t have to — and ought not to — accept the conditions that too many live in.

1. Tough cites two studies to support his view that “deeper-learning methods, when employed well, do actually produce measurable benefits for students in poverty.” The first shows gains among middle schools using a multifaceted program whose success can’t necessarily be attributed to its deeper learning approach. The second study found that students who attended high schools that implemented deeper learning practices “at least moderately well” outperformed their peers. However, restricting the study to schools that have implemented the initiative well creates a selection bias; schools that implement programs effectively are likely to be effective across other dimensions as well. (back to story)

2. Tough does mention that skeptics of deeper learning believe students need strong background knowledge — which affluent but not poor students often get at home — before they can benefit from project-based approaches. But he doesn’t address how deeper learning can account for this issue, except for citing the two studies discussed in the previous footnote. (back to story)

3. Specifically, Tough says, “[D]isparities [between wealthier and poor students] are growing despite the fact that over the past two decades, closing the test-score gaps between affluent and poor children has been a central aim of national education policy, as embodied in President George W. Bush’s No Child Left Behind law and President Barack Obama’s Race to the Top program …  Along the way, certainly, those efforts have produced individual successes …  but they have led to little or no improvement in the performance of low-income children as a whole.” It is important to note, though, that poor students have in fact made gains in recent years on fourth and eighth grade federal tests, international tests, and high school graduation rates. (back to story)