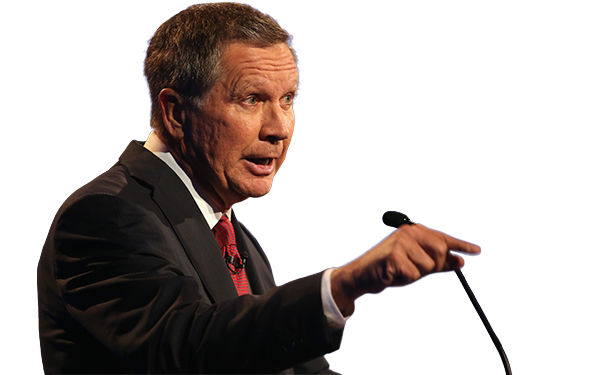 Sad and pathetic: 1 1/2 hrs into debate, not a q on education. Is this all about gotcha and ratings? How about our future – our children.

(See more about Kasich’s, Jindal’s and Bush’s K-12 education views from their conversations during The Seventy Four’s education summit in New Hampshire.)

CNBC moderators asked Kasich how he would address the country’s $1 trillion-and-growing student debt tab.
He discussed holding down costs, noting that universities “will not get paid one dime” unless students graduate or complete a course. High school students can take college-level classes, and the state is “working now to go after cost drivers in our universities.”
Colleges should stay out of non-education businesses, like dining halls, dorms, and parking, he said, citing Ohio State’s sale of its parking lots and garages for a $500 million profit.
For those who have already graduated, there should be a program that provides those who do “public service, and I mean legitimate public service” to have their loans reduced, Kasich said.
A public service loan forgiveness program already exists that allows people who work for government or non-profit groups to forgive their federal loans after 10 years of payments.
Bush, for his part, argued for less federal involvement in higher ed accountability.
“Let the states do this,” he said.” You’ll create a much better graduation rate at a lower cost, and you won’t indebt the next generation with recourse debt on their backs. It’s always the solution of the Left to create more government from the federal government. It is broke.It is not working.”
Pelican State For-Profits
Moderators asked Jindal, an ally of for-profit colleges, about the Obama administration’s effort to crack down on those institutions. The administration has proposed several iterations of what are often called “gainful employment” regulations. The most recent, which went into effect in July, would end federal aid to for-profit colleges and some community college programs  if graduates pay more than a certain percent of their income in student loans.
For-profit schools will be accountable to students through the market, not through a federal regulation, Jindal said.
“There’s accountability to the students through choice and competition. We don’t need the nanny state to protect us from ourselves,” he said.
(Jindal’s brother, an attorney, has represented for-profit colleges in their legal fights with the Obama administration, according to The New Orleans Times-Picayune.)
Jindal tied what he portrayed as inappropriate government intrusion into education decisions to a number of other issues, including Obamacare, Common Core, efforts to tighten gun control laws, and Louisiana’s school choice efforts in both higher education and K-12.
He cited the Taylor Opportunity Program for Students, which provides scholarships for Louisiana residents to attend public or private colleges in the state, as well as the state’s K-12 voucher program.
“In Louisiana, we fought so that the dollars follow the child and so the child [is] following the dollar. What that means … is that parents and their families can decide what’s the best way for their children to be educated,” he said.
Photo by Getty Images
Submit a Letter to the Editor
October 29, 2015