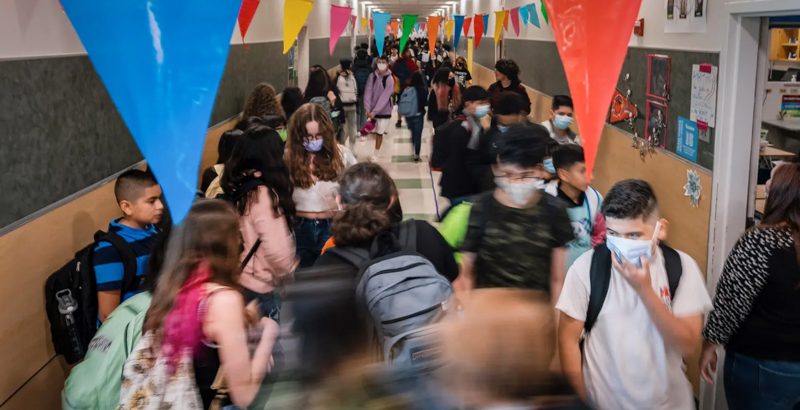 A new Texas law requires at least one teacher and one campus administrator at each school to undergo civics training that must be implemented no later than the 2025-26 school year. (Jordan Vonderhaar / The Texas Tribune)

Under the new law, a “teacher may not be compelled to discuss a widely debated and currently controversial issue of public policy or social affairs.” The law doesn’t define what a controversial issue is. If a teacher does discuss these topics, they must “explore that topic objectively and in a manner free from political bias.”

It also requires at least one teacher and one campus administrator at each school district to attend a civics training program that will teach educators how race and racism should be taught in Texas schools.

There are more than 1,200 school districts in Texas. The cost to develop and implement the training program alone would be about $14.6 million annually, according to the Legislative Budget Board.

Senate Bill 3, passed during the Texas Legislature’s second special session ending Sept. 2, replaces House Bill 3979, which Gov. Greg Abbott signed over the summer. At the time, Abbott said more needed to be done to “abolish” critical race theory in Texas classrooms and lawmakers went to work to craft a more restrictive measure. The result was SB 3.

“It’s not just about what a teacher may or may not say,” said Chloe Latham Sikes, deputy director of policy at the Intercultural Development Research Association. “It’s also how they go about their class, how they design the class — how they might address really sensitive issues of race and gender and identity and sexism in their classrooms.”

Critical race theory is the idea that racism is embedded in legal systems and not limited to individuals. It’s an academic discipline taught at the university level. But it has become a common phrase used by conservatives to include anything about race taught or discussed in public secondary schools.

The new civics training mandated by the new law that requires attendance by at least one teacher and one campus administrator from each district will be created by the Texas Education Agency and it must be implemented no later than the 2025-2026 school year.

The state education agency has not yet released what this civics training program will look like. The law also requires the TEA to set up an advisory board for the training program.

The earlier attempt at a law to restrict what is taught in school caused so much confusion among educators that a North Texas administrator informed teachers at a training session in October that they had to provide materials that presented an “opposing” perspective of the Holocaust.

In records obtained by The Texas Tribune, the TEA has been advising school administrators that teachers should just continue teaching the current curriculum until the State Board of Education revises the social studies curriculum over the next year.

The new law also zeroed in on the New York Times’ Pulitzer Prize-winning 1619 Project, a collection of essays that centered on how slavery and the contributions of Black Americans shaped the United States. With this law, students cannot be required to read the 1619 Project essays. It also bars students from receiving credit for working as a volunteer with a political campaign or interning for companies or organizations where they will be lobbying. Also, any school district that uses an online portal to assign learning material has to give parents access.

“All of this is really about routing out any acknowledgement of the salience of sex, race, gender and silencing those conversations, which, in the end, ultimately hurt students of color and students in the LGBTQ community,” Sikes said.

Disclosure: New York Times has been a financial supporter of The Texas Tribune, a nonprofit, nonpartisan news organization that is funded in part by donations from members, foundations and corporate sponsors. Financial supporters play no role in the Tribune’s journalism. Find a complete list of them here.

Brian Lopez is an education reporter at The Texas Tribune, the only member-supported, digital-first, nonpartisan media organization that informs Texans about public policy, politics, government and statewide issues. This article originally appeared on Dec. 2 at TexasTribune.org.