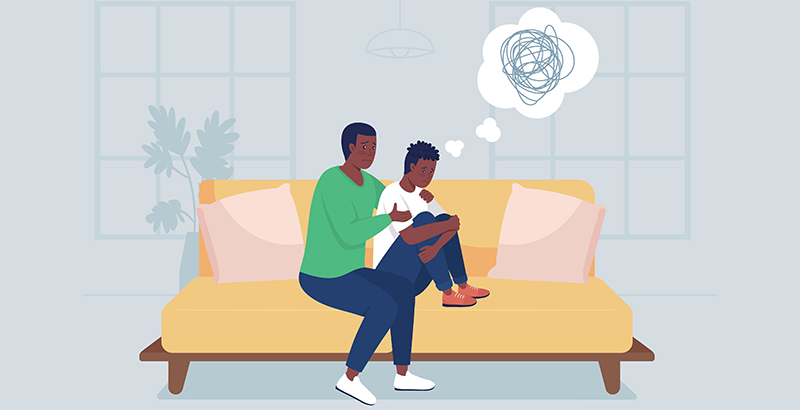 Depression among high school students hit its highest rate in three decades, 41 percent, during the pandemic, according to results of the 2021 Montana Youth Risk Behavior Study.

Court also noted nearly 18 percent of Native American students attempted suicide last year compared to 8 percent of White students, a data point of which tribal health leaders are aware. She also said freshmen and sophomore students were more likely to have attempted suicide than juniors and seniors, and girls more so than boys.

Court provided the report Friday to the Montana Board of Public Education. She said the survey, sponsored by the U.S. Centers for Disease Control and Prevention, tracks health risk behaviors that could result in mortality and morbidity, and she said Montana helped develop the questionnaire back in 1991, and it contains 80 percent of the original questions.

“Montana was a leader then, and we still are as far as the YRBS is concerned,” Court said. “CDC touts our website to other states in the nation.”

During the 2020-2021 school year, 98 percent of all school districts, and 22,576 students in grades seven through 12, completed the survey, the report said. Court noted the report represents the first time in 30 years that questions about youth health behaviors were asked in the midst of a pandemic.

Court also said studies show an association between poor mental health and screen time, and she said this time, a high of 72 percent of students spent three or more hours on their screens on an average school day, not counting homework time.

She also said some parents have suspected that their children are being pressured by peers into taking risks they wouldn’t take on their own, and she said the data show that to be true.

“If you want to see really sad data, look at the students with disabilities,” Court said. “They are under enormous pressure to belong to groups and are partaking in health risk behaviors at higher rates than all the other groups.”

The data did have a couple of bright points, however. A downward pointing trend line shows tobacco use continues to decline among youth, with just 28 percent of youth having tried cigarette smoking compared to, at one point years ago, 72 percent.

“That is one of the most beautiful trend lines there could ever be if you work with data,” Court said.

Some 48 percent of students have ever tried a vapor product, down from 58 percent in 2019, she said. Court noted the trend that is concerning is that vaping increases as students go from ninth grade to 12th grade, as they’re developing habits for life.

In 2019, Montana hit an unenviable high point: It led the nation in percent of youth who reported texting or emailing while driving. Court said the data represent only students who drive.

This time, the figure jumped up to 57.1 percent, and it has gone up since 2013 when the question first was asked, Court said. She said girls do so more than boys, and White students do so more than Native American students.

“If we were a leader in the nation in 2019, I’m wondering where we will place ourselves when the 2021 data results are released” for the nation, she said. She said Montana was one of just five states to get the survey completed last school year, so the national results for 2021 won’t be released until June 2023.

“The race and ethnicity breakdown has been consistent for the last two cycles,” she said. “Native American youth have used alcohol less than their white counterparts.”

Marijuana use among youth was at nearly 20 percent, and it has remained level since around 2003, she said. Some 32 percent of Native American students reported using it in the past 30 days of the survey, and 17 percent of White students used it.

She also said 17 percent of high school students did not eat breakfast at all in the seven days before the survey, up from 14 percent last time, and she said it’s important because breakfast programs exist in many schools, and it’s the most important meal of the day. She also said school nutrition staff at OPI are aware of the data point.

Board member Anne Keith of Bozeman said one thing that jumped out at her from the data as the mother of two daughters is that female risk factors appear higher than male ones, and she wondered about the implications for schools.

“We market messages to men, the male population, more than the females, and maybe we should rethink that,” Keith said.

Court said she made the same observation. She said that trend hasn’t been the case over the years, but it was possible to take a closer look at all the data.

Angela McLean, director of American Indian/Minority Achievement for the Montana Office of the Commissioner of Higher Education, thanked Court for her trustworthy work on the data and smart contributions to the state over the years. McLean also said the state is making efforts to support mental health, and she noted a certificate offered at Montana State University for 12 credits as a meaningful tool that will help school leaders serve students.

Court said one important factor in ensuring scientifically sound data was support from schools and families. She said schools do a great job of presenting the information so that parents don’t see it as offensive or an invasion of privacy, and OPI keeps information about specific schools confidential. She also said schools rely on it for grant applications, and she encourages them to share the information widely.

“Schools are using it in so many different ways,” Court said.