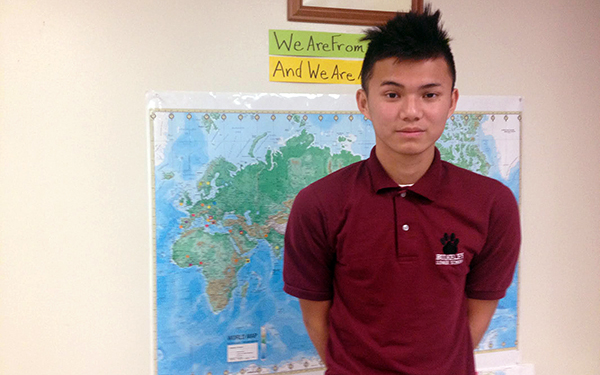 Eh Kaw Ku, a high school student and refugee at Bulkeley High School. (Photo by Naomi Nix)
Eh Kaw Ku, 16, appears to have a life that would be familiar to many American students. He’s got a cool kid hair cut—short on the sides, tall on top—and a stable of friends in and outside the Karen student community.  The sophomore plays on the varsity soccer and swim teams at school, while still keeping up with his classes.
Things were not always so easy. Five years ago, Ku’s family traveled from the Thailand refugee camp he had lived in his whole life to Hartford to get a new start. They arrived in winter in short sleeve shirts with little knowledge of the new city they would soon call home, according to Noo, who picked them at the airport that day.
To Ku everything was different, from the school bus that picked him up to the teachers who spoke English too quickly. Making friends was hard at first and so was adjusting to the food. Even now, it’s hard not to miss his home and pet pig in Thailand.
Despite his homesickness, Ku is mulling the idea of going to college or maybe becoming a car mechanic.
Nasser, who is a medical case manager for Catholic Charities, also dreams of a bright future for her own children.
Her three girls started kindergarten in Connecticut—first in the ESL class but then they integrated into mainstream classes. Her oldest is in the 4th grade but reads on a 6th-grade level and was recently accepted into her school’s gifted and talented program, Nasser said.
She said her young daughters don’t seem to notice that their family has stayed in the United States far longer than they planned. And with the exception of one recent incident, the girls haven’t experienced much teasing or hostility because of their cultural or religious background, she said. She herself recounted feeling a receptionist eyeing her with an air of suspicion and dislike recently when she took a client to a hospital visit.
It was the first time she felt that way, Nasser said, and she hopes it’s the exception — for her and her children.
“Connecticut welcomed me in the best way. I really want to say ‘Thank you Connecticut,’” she said.  “I’ve never felt I’m unwelcome or being rejected for my name or my ethnicity…I’ve always felt like I’m just like anybody else.”