Updated June 7; this article was produced in partnership with LA School Report.
(Los Angeles) — A deep rift in the Democratic Party over education policy came into sharp relief in the months leading up to today's primary elections in California, as a record $28 million has been spent by outside groups on state races, one-third coming from groups supporting charter schools.
On one side, traditional Democratic players, including the California Teachers Association, are aligning themselves with candidates who have committed to protecting and bolstering the current system. On the other, new players are promoting charter schools, greater accountability for performance and less stringent job protections.
California’s move to a top-two primary system five years ago, in which the candidates who receive the most votes advance to the general election regardless of their party, set the stage for this Democrat-on-Democrat battle.
The latest example in Southern California is playing out in an open state Assembly district seat in Glendale, Burbank, La Canada Flintridge and parts of Los Angeles where an independent expenditure committee supporting charter schools has spent more than $1.2 million to back a Democratic candidate, flooding voters’ mailboxes over the past eight weeks with attack ads on a fellow Democrat supported by teachers unions.
“It’s nice to see that there’s an alternative financial base,” said Marshall Tuck, who ran for state superintendent in 2014 and is no stranger to this rift. “At a minimum having highly competitive races where people can communicate different options to the public … leads to a better solution for kids.”
Tuck ran for state superintendent in 2014 against incumbent Tom Torlakson, a fellow Democrat. The race was the most expensive on the statewide ballot, topping $30 million and far outstripping previous races for superintendent. It was more expensive than the gubernatorial race that year.
While the CTA and other unions backed Torlakson, who is a former teacher, philanthropists and advocates who support school choice supported Tuck and poured millions into his campaign.
“I think it’s good that Democrats that do want to change our public schools and do believe that we need to shake things up and aren’t necessarily going to have a stake in the status quo” run for office and there are people willing to invest in them, he said.
Historically, he said it’s been very difficult for someone who wants to reform education policy to get elected because the “establishment” candidates have received all of the financial support.
Tuck said he thinks three things caused the change: the decision by voters in 2010 to switch to a top-two primary system, which took effect the next year; people who previously only donated to non-profits that supported education reform are now willing to give to political candidates and causes; and because of the top-two primary system, more Democrats are willing to run without the support of the status quo.
Groups supporting charter schools have been a major donor to legislative races statewide.
State campaign finance records show that about one-third of a record $27.9 million spent as of Friday by independent expenditure committees in legislative races statewide has come from three groups supporting charter schools, according to Rob Pyers of California Target Book, which provides a non-partisan analysis of state and congressional races.
In the 43rd Assembly District seat, being vacated by Assemblyman Mike Gatto, D-Burbank, due to term limits, an independent expenditure committee called the Parent Teacher Alliance, sponsored by the California Charter School Association Advocates, has spent $1.2 million as of Friday, state campaign finance records show. Parent Teacher Alliance is not associated with the well-known Parent Teacher Association.
Records show that donors to the CCSA Advocates Independent Expenditure Committee include Michael Bloomberg, Doris Fisher, Jim Walton and Eli Broad. 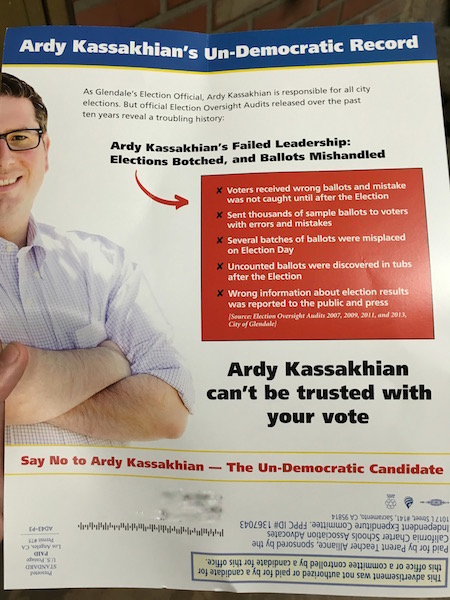 Mailer paid for by the Parent Teacher Alliance, sponsored by the California Charter School Association Advocates Independent Expenditure Committee.
Glendale City Clerk Ardy Kassakhian has been backed by the California Teachers Association, which is considered among the most powerful lobbyists in Sacramento. Glendale City Councilwoman Laura Friedman has been endorsed by the California Charter School Association Advocates, the political arm of the CCSA. The union and education reformers have clashed over education policies like teacher tenure and the expansion of charter schools.
The 43rd Assembly District also includes Atwater Village, East Hollywood, Los Feliz and Silver Lake.
Three other Democrats are running for the seat as well as two Republicans and a member of the American Independent Party.
State campaign finance records also show the California Teachers Association’s Independent Expenditure Committee has spent $47,721 on the race: $35,791 on mailers opposing Friedman and $11,930 supporting Kassakhian.
The CCSA committee has spent $910,791 supporting Friedman and $304,355 opposing Kassakhian as of Friday, records show.
“It’s shocking the amount of money that the (CCSA) PAC has put into legislative races this year, in many cases overwhelming what the candidates themselves have raised,” said Rose Kapolczynski, a longtime political consultant who is working for Kassakhian. 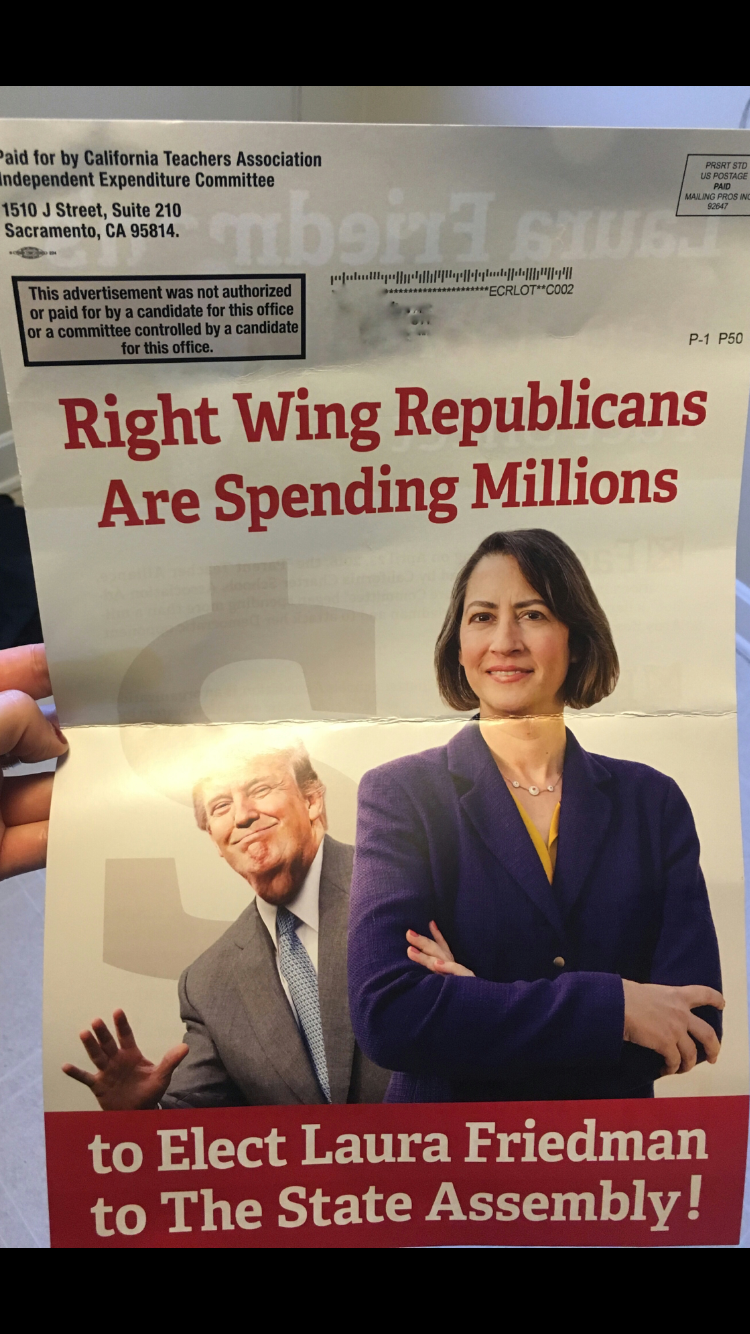