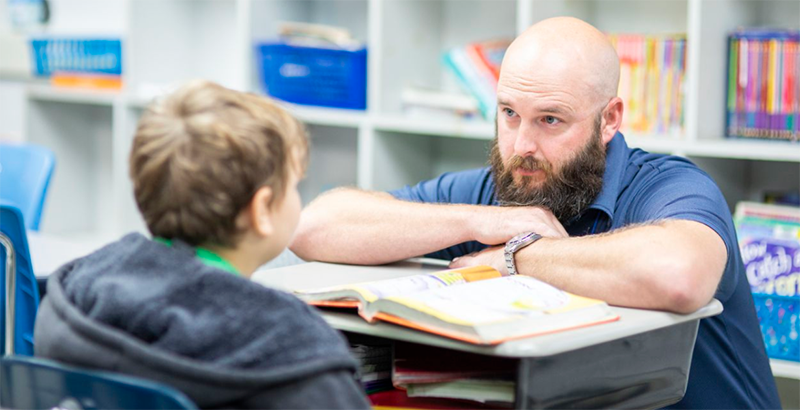 Scotty Matthews took a seat on a small bookshelf and peered at a page of poems held by a third-grader in his southeast Alabama classroom.

Matthews, a former tutoring aide who had just come to Rehobeth Elementary School, was used to working with students who needed some extra help with reading.

He asked the student to read a limerick about a monster-like machine that “munches up socks by the pair.”

Tracking along with his finger, the boy kept a steady pace, but paused at a word on the second line.

“Munches,” Matthews prompted. The boy repeated the word, continuing slowly to the end.

Many schools rely on paraprofessionals to give specialized support to teachers. But Rehobeth says trained and experienced aides are key to recent success. The school recently led peer mid- to high-poverty schools in reading scores, and in closing racial and socioeconomic gaps.

Now, as the school, like many around Alabama, wrestles with dips in achievement scores from the pandemic and considers the impact of a third-grade reading law, staff are doubling down on the presence of Title I aides. And they’re expanding that expertise in developing a team of trained reading educators as they work on afterschool tutoring and community support.

“If you don’t have a teacher that has a strong background in word work, or how to crack the code of reading, they’re not going to know how to target specific needs and then support the child in their classroom,” said Rachel Logan, a literacy specialist who consults schools on equitable practices. “They’ll farm them out and say, ‘Something’s wrong with this kid.’”

Virtual interventions and extra K-2 supports funded by federal relief money, experts say, can boost proficiency, but only if teachers like Matthews and his fellow support staff are also trained properly and have high-quality materials.

Rehobeth is working on boosting both those aspects. And staff are working around the clock to reteach foundational skills — such as first-grade phonics — that some students lost during the pandemic.

“In theory, they should be readers by the time they get here,” Matthews said. “That’s not the case for every student.”

Despite pandemic complications, Rehobeth second graders had improved reading scores by 60 points from last fall to spring, according to schoolwide data — something Matthews noted as he worked with his students.

That’s five points higher than the national average, and a statistic, school leaders say, that shows its strategy is working.

“Our scores overall have always been good,” said Dusty McKinley, the school’s principal. “Our teachers know what standards they’re teaching and they know how to meet those babies’ needs… But as we look at scores over the state, our reading proficiency levels are not where they should be. So we’ve got to push for that regardless.”

Most Alabama districts have some experience with Title I aides and paraprofessionals, but successful implementation of interventions can sometimes be a challenge.

Matthews’ instruction is just one part of Rehobeth’s team approach to teaching literacy.

The school uses three tiers of reading instruction: There’s Matthews’ core class, where students are getting the bulk of their reading lessons. From there, he might work with smaller groups of students on specific skills in the classroom, or literacy coaches will designate some students for outside tutoring — or both.

Throughout the week, different groups of students are pulled for additional support from Title I and bilingual aides. For students who need the most support, the school uses SPIRE materials, which are research-based and aim to help students with dyslexia or other learning disabilities.

“Our Title I teachers are key here,” said McKinley, a Rehobeth graduate who previously taught special education. “Most of them have been here for several, several years… They know our school, they know our community, and our kids know them.”

According to researchers at the National Center for Education Evaluation and Regional Assistance, tutoring aides are key for schools developing a variety of interventions. The Center recommends a well-developed plan to identify struggling students and track their responses to regularly-scheduled interventions.

That’s where Hannah Chancey, also a Rehobeth graduate, and Gaby Olea, a new bilingual aide who grew up in nearby Enterprise, come in. They coach small groups of students with whiteboards, binders and sometimes playdough in hand.

Words and sentences are like code, experts say, and reading proficiency is built through specific skills work.

McKinley said the school had just hired three more tutors trained in SPIRE, to add to the two that had been teaching the materials for several years.

“It’s really important that we put the majority of our resources in K-2 because that’s where they’re getting their foundation,” said Barbara Greathouse, the school’s literacy coach. “We’ve got to make sure that they’ve mastered the foundational skills in K-2 so that they’ll be successful in the higher grades.”

“Invest in people,” she said during a recent panel discussion. “Invest in your teachers. Build their knowledge. Empower your teachers to stand in front of children every day and know that they are skilled enough to address the different needs, the different deficiencies or challenges that students might bring into those classrooms.”

McKinley said that effectively using an influx of $21.6 million in federal COVID aid will require listening to core classroom teachers, who are most attuned to student’s needs.

“It’s a blessing,” McKinley said, of the money. “It takes the burden off of us for having to provide that funding. So we can use it for technology, for parental involvement, for instructional materials in our classrooms, that otherwise we wouldn’t normally be able to do because we were funding those tutors.”

As the school reviews its latest internal test scores, it’s seeing some growth. Greathouse said some of that is likely due to the tutoring push, but classroom teachers are going to continue to play a crucial role moving forward.

“The teachers knew they had a larger job to do because of COVID, and they got it done,” Greathouse said.

Experts agree that good teachers are important, but also recommend specific training, called LETRS, which is grounded in decades worth of research on how students learn to read.

Additionally, core curriculum in early grades should focus on explicit phonics instruction, but most vendors, like McGraw Hill, which Rehobeth uses, tend to focus more on “balanced literacy,” which spreads out concepts rather than drilling down on certain skills.

Rehobeth is working to get more teachers trained in effective reading instruction and improve its ability to track students’ progress. The district also will switch to a new reading curriculum next year.

The school still has a ways to go to get back to its former proficiency rates. Recent ACAP scores show that eight of Matthews’ students — a little less than half of the class — scored below benchmarks in language arts. Schoolwide, students scored lowest on reading and literacy questions.

“We’re really hammering these to try to get them up,” he said, pointing to the low scorers at the bottom of the list, who he is now working with as third-graders.

Like the rest of the state, Rehobeth’s Black and Hispanic students scored lower on state benchmark testing than their peers, with a significant slide during the pandemic — though experts say it’s tough to compare 2019 and 2021 scores, since the state switched standardized tests.

Reading instruction also can be impacted by disparities outside of the classroom — like discipline, attendance and staff turnover — that can limit engagement.

“When schools are seeing academic inequities, we point them to also look at other things that are happening around that,” said Marceline Dubose of the Equity Literacy Institute, such as ways to increase instructional time and make sure every student is engaged with material.

Matthews explained that a handful of his students were teachers’ kids and might have benefited from extra instruction at home during the pandemic. And while the school was face-to-face last year, shortened instruction in first grade in the spring of 2020 could have significantly impacted students who were learning English as a second language, or those who didn’t have the resources at home to bolster phonics skills.

As the rest of his third-graders focused on individual work, Matthews read to a small group of students as they traced the words of a worksheet with their fingers.

When it was their turn to read, he encouraged students to circle words they stumbled on — a technique he learned from recent Alabama Reading Initiative training, which taught him the importance of “honing in on those little things,” he said.

For the week ahead, Matthews will go over the same poems and rehash concepts he wasn’t able to spend as much time on, like teaching students how to identify point of view. He’ll work more with small, targeted groups of students and make time for phonics games.

With extra attention to those instructional methods and help from school-wide interventions, Matthews is hopeful his students will get back on track.

“Their resilience has been amazing,” he said, also praising the efforts from their previous teachers and tutors.

But he knows he’s got a long road ahead of him.

“I feel like there’s no days off,” he said. “It’s intense every day, because I don’t want a student to not pass due to my instruction.”

This article originally appeared at AL.com and is published in partnership with the Solutions Journalism Exchange.

Rebecca Griesbach is a reporter for the Alabama Education Lab.