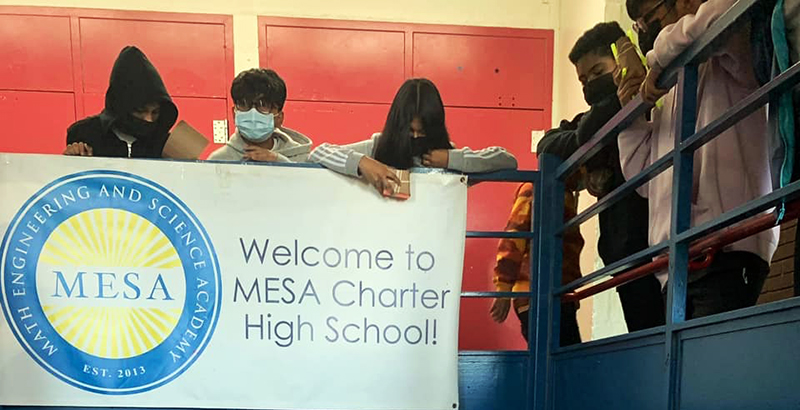 The young lady sat in our office, sharing a version of a story we’ve heard repeatedly. School had never come easy for the kind, young woman with the wry smile. With intensive academic and social-emotional support, she had graduated from high school and enrolled at a two-year school in the City University of New York system. But navigating the system was overwhelming, and she soon stopped attending. She was now working 10- to 12-hour days, off the books, at a deli.

Bianca, whose name, like those of the other students discussed here, has been changed to preserve her privacy, was in the fifth graduating class at Math, Engineering and Science Academy (MESA) Charter High School, and we are proud of the opportunities our school has created for her and her peers. In a district where the high school graduation rate has averaged just over 70 percent for the past four years, MESA has graduated 93 percent of its students on time. There’s no magic bullet to these results, just sweat equity. Students get highly targeted instruction, frequent communication with parents and a loving, positive environment where they can thrive.

But once they leave what we call MESA’s “love bubble,” they graduate onto a razor’s edge. The slightest setback — a cut in a parent’s wages that impacts their ability to pay for college, a bureaucratic slip-up at a university, a missed payment deadline — can lead to disaster. A report published earlier this year by the New York City mayor’s office found that nearly a quarter of young people between the ages of 18 and 24 are both out of school and unemployed. Nearly 80 percent are youth of color, like our students. For many of them, the future can seem over before it has begun. Disconnected youth earn $31,000 per year less than their peers upon reaching adulthood and are 52 percent less likely to report being in good or excellent health.

Like many charters, MESA has historically focused on college as the primary postsecondary option. For many, it has paid off: 71 percent of our students this past year matriculated at selective, four-year colleges, including Ivy League schools. But students who attended two-year colleges — often choosing that path because they simply didn’t see an alternative — struggled. Nearly 70 percent of them did not graduate on time.

This is in line with broader national trends. Nationally, only 16 percent of urban community college students graduate in three years. In New York, the three largest community colleges in the City University system enroll more than 80,000 students; three-quarters of them will drop out without completing their degree. “College for all” simply hasn’t proven to be a viable plan for a large number of young people.

We are committed to supporting all our students regardless of whether or not their postgraduation plan includes college. So we’re expanding our focus to include alternatives that can provide financially sustainable, personally satisfying careers. We’re building partnerships with job-training programs. We are revamping our school day programming to explicitly build career-ready skills such as problem-solving and communication, and letting students leave school early to participate in internships. And we’re enhancing our postsecondary support for non-college-bound kids through the development of a “13th grade” case management model.

This approach can make a real difference. Steven had dropped out of college because of financial constraints and was working at Family Dollar; he’s now enrolled in The Marcy Lab School, a free hybrid postgraduate program in Brooklyn whose alumni learn skills that can earn them six-figure salaries in tech jobs. Justine was folding clothes at Old Navy; we connected her with KindWork, a program that trains young people to be high-level customer service specialists for Silicon Valley darlings like Uber, Lyft, and Zola. She landed a job at ProperCloth and recently earned a promotion. Anthony was taking odd jobs; he recently applied to a masonry program through Strive, an organization that has worked to close the skills gap since 1984. He will train and receive help getting started in a highly skilled trade in a growing field.

Three-quarters of so-called disconnected youth have a high school diploma, and the relationship between a school and its graduates is an asset. It’s been formed and cultivated over four years. Schools can leverage that trust to support students not just in finding the right programs, but persisting through them. Many alumni we speak to who have stalled in their progress feel embarrassed. They trusted us as students and continue to trust us — and only us — enough to take a risk and get back on track.

But our education system draws a bright line on the day of graduation. High schools are funded for their 9-12 programs only, and evaluated on their graduation rates. There is no accountability for what happens to kids the day after they cross the stage, and no resources to support a school that wants to do more for its alumni (MESA’s program is funded from our operating budget). Structurally, that relationship is tossed aside the day a student gets his or her diploma.

Districts, charters and every school serving low-income students have an opportunity to radically reshape how they support young people, especially those from lower-income communities. If the purpose of a high school education is to prepare students for the next step, schools should be judged on whether their students are actually prepared to take that step. They should be held accountable not only for the percentage of students who graduate, but for how many of those graduates remain in college, in a job training program or in a career with growth potential two years after they receive their diploma.

While the system that exists right now works for many kids, it is also clear that it is failing a whole lot of others, particularly the most vulnerable. At MESA, we’ve had some great successes, but we’ve also learned some hard lessons about what we need to do differently to ensure that all our students have the future they deserve. We hope policymakers will do the same.

Pagee Cheung and Arthur Samuels are the co-founders and co-executive directors of MESA Charter High School.