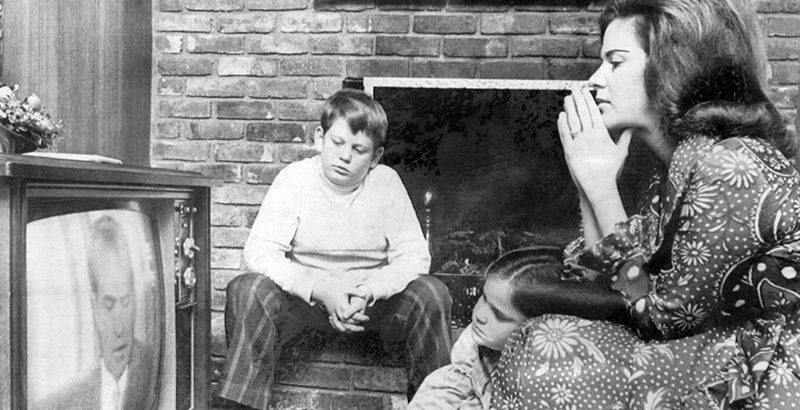 With her son beside her, Bonnye Vohden in 1972 watches President Nixon announce on television his Vietnam withdrawal plans. Her husband, Navy Lt Commander Raymond Vohden, has been a prisoner of war in North Vietnam for eight years. (Underwood Archives/Getty Images)

I’m a disciple of E.D. Hirsch Jr.’s prodigious work on reading and language proficiency, and an unabashed fan of his Core Knowledge curriculum (full disclosure: I was recently invited to join the board of the Core Knowledge Foundation). The big idea undergirding Hirsch’s work is that there is a body of “tacit, taken-for-granted knowledge needed for general reading and writing in a speech community.” This insight has led him and his disciples to argue indefatigably for a common curriculum in the elementary and middle school years.

But even the most knowledge-rich school curriculum cannot inventory or anticipate every conceivable item of mental furniture the literate person is expected to possess. A month ago, for example, if you used the terms “coronavirus,” “COVID-19” or “social distancing,” you would have had to explain what they meant. Now, you can confidently assume everyone knows. That’s how language works among the fully literate members of a “speech community.”

Because the store of general knowledge we need for full language proficiency is fluid, not fixed, reading and watching the news should be a staple of the well-educated person’s knowledge and language diet. But at a time when it’s never been more important to be well-informed and literate, children have never been less likely to pay close attention.

A Common Sense Media report found that only about half of children (48 percent) say following the news is important to them. This mirrors almost precisely findings from the most recent National Assessment of Educational Progress exam in civics, which registers by far the poorest performance of all tested subjects: 49 percent of eighth-graders reported discussing current events at least once a week in school. The most recent fourth-grade NAEP civics exam was administered in 2010; at that time, a mere 20 percent of 10-year-olds said they discussed current events in school “almost every day.”

If you’re north of 40, you probably remember “current events” as a classroom warhorse. Nearly every morning in my working-class Long Island elementary school, one student would have the job of reading, summarizing and reporting to the class the day’s news: one international story, one national, one local, plus sports and weather. Not the most sophisticated pedagogical approach, perhaps, but it normalized the idea of paying attention to what’s going on in the world, even for kids. Remember the Weekly Reader? Your kids don’t. It ceased publication in 2012, not long after celebrating its 100th anniversary.

The mass media, pre-internet TV days of the 1960s and ’70s were probably the high-water mark for common culture and Hirschean “cultural literacy.” Most Americans got their news and entertainment from the same three TV networks. The vast majority of households subscribed to a newspaper. In my boyhood home, the New York Daily News was at the breakfast table every morning; Newsday arrived every afternoon. My parents gave me a subscription to Time for my birthday when I was in seventh grade and renewed it annually. Even though my mother and father were not particularly well educated, the signal I took from “current events” in school was reinforced at home: Being informed was just a basic part of everyday life.

With stressed and anxious parents now dragooned into service as ad hoc teachers, the juiciest bit of low-hanging educational fruit might be cultivating children’s interest in news and reviving current events. It’s not the K-8 staple it once was, but it’s a missing piece of the curriculum particularly well suited to at-home learning in the time of coronavirus. And it’s a habit, once formed, that can continue as a significant value-add once life and school resume their normal shape, contributing to literacy and language proficiency as well as cultivating a disposition of civic-mindedness. At a time when most of us are likely paying a little more attention to the news, it also fits in seamlessly with how we are already spending our time. Include your kids in it.

When the news is grim, even frightening, the tendency might be to shield children from it. I’m not a child psychologist, but that impulse has always seemed curious to those of us who grew up a half-century ago when we were not merely a divided nation but a violent one. Airline hijackings and assassinations were commonplace; the FBI recorded more than 2,500 domestic bombings in an 18-month period in the early ’70s. Nearly 60,000 American soldiers died in the Vietnam War, the first major conflict to come into America’s living room every night on the news. The idea that children should be shielded from the news might seem odder still to our parents who came of age during the Great Depression and World War II.

The American Academy of Pediatrics offers a significant amount of guidance on screen time and device usage, but nearly nothing on when children should begin engaging with news and current events. Common Sense Media suggests age 7 as the point at which to begin allowing children to watch the news.

There’s much to recommend gatekeeping as opposed to letting your child drink straight from the fire hose of social media and cable news. If you’re starting from scratch, the nightly network newscasts on ABC, CBS and NBC, while not the cultural behemoths they once were, are still mostly serious and accessible. Most local papers carry wire-service dispatches from the Associated Press and Reuters. There are news outlets created specifically for kids, such as Newsela and Time for Kids, that are excellent and enriching. But don’t rule out including kids in your established news media routines. As with reading, modeling is critical: Children of avid readers are more likely to become avid readers themselves. Likewise, there’s much to recommend demonstrating to children the value you place on staying well informed and making discussions about the news a family habit.

As we continue to socially isolate and shelter in place, it might be the easiest and longest-lasting educational benefit we can offer our kids.