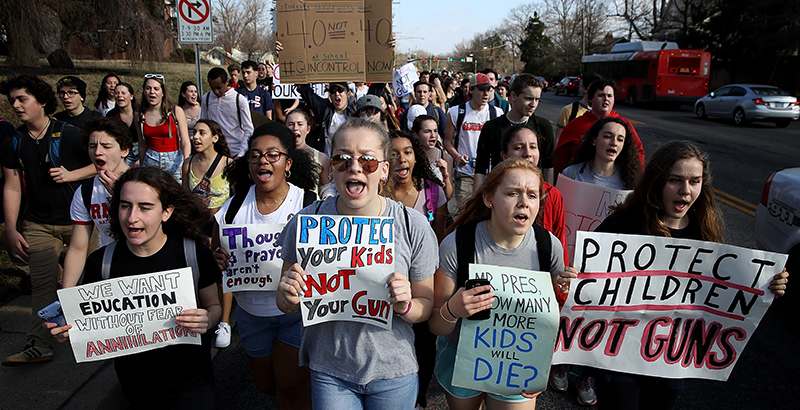 If Rose Thomas were in my high school civics class, I’d give her an A.

Thomas is the student council president of Bexley High School in Columbus, Ohio, and a leader of a planned student walkout to protest gun violence in schools. Those who walk out of their classes at Bexley will serve an hour-long detention, the school’s standard penalty for cutting class. But they’re not upset about it. Thomas and her fellow protesters wisely acknowledge that their act of civil disobedience has no point without a punishment, and the district can’t show favoritism for one viewpoint or issue. If Bexley’s principal “doesn’t punish the demonstrators supporting Parkland, ‘he has to [allow] it for every cause,’ ” Thomas explained to The Columbus Dispatch.

If every student had such a solid grasp of the tensions between rights and responsibilities, and an equally clear-eyed view of the moral authority undergirding protest and activism, I’d stop worrying about civics education and retire happily.

Student civic engagement is to be encouraged, even celebrated, but that doesn’t mean it must meet with official approval. Indeed, it is essential that it does not. If students have permission to walk out, it’s no longer student activism at all. It’s a field trip. And that’s part of the teachable moment, too. The message to students should be clear: If this issue is important to you, then it’s worth the consequence. Otherwise, you’re not protesting gun violence, you’re boycotting chemistry class. By its very nature, an act of civil disobedience means the protester refuses to comply with rule, norms, and expectations. Permission, by definition, restores the element of compliance, robbing the protest of any meaning.

In the days since the protests were first announced and organized, schools have wrestled with how to handle the anticipated 17-minute walkout, one minute for each victim killed in the Parkland shooting. Some — unwisely, in my opinion — have overtly said they support staff and students who are protesting; others have announced that no disciplinary action will be taken, which is de facto approval. From a civics education standpoint, however, the best thing schools can do to validate the walkout as authentic student activism is to make it clear that all school discipline standards will be enforced. Then let students decide whether their cause is worth the price, or just an excuse to skip class.

There is no doubt that schools are well within their legal rights to hold students accountable for walking out to protest. Students don’t lose their First Amendment rights during the school day, but courts have generally recognized limits to the exercise of free speech when it “materially and substantially interferes” with the functioning of a school. A mass walkout meets the test, as the American Civil Liberties Union has acknowledged, even as it has cautioned schools not to punish students excessively for participating in the demonstration.

Schools that refuse to enforce standard discipline over the Parkland protest may regret it down the road. The vast majority of schools are publicly financed and government-run. If school officials grant students permission to walk out to protest gun violence (a refusal to enforce disciplinary norms is tantamount to official approval), they must also not punish those who disrupt learning to protest in favor of gun rights, or for or against abortion, police violence, or any conceivable political cause. This includes viewpoints many in a school community might deem repellent. Thus, the only sane policy on the Parkland protest is an aggressively neutral stance — with consequences.

As someone who is deeply concerned about the role of our schools in preparing young people for citizenship, I expect to be cheered by Wednesday’s display of student activism, regardless of whether I agree with its political agenda. But as a civics teacher, my message to students would be that the courage of your convictions carries a price. If your cause is just, you should pay it with honor and dignity.