The first day of school is a major milestone, no matter your grade, age or hometown. But back to school during this strange and disorienting year, amid an ongoing public health crisis, means something much different.

Depending on where you live, it feels radically different too.

Over the past few weeks, as new photos have emerged from schools around the planet, we’ve seen fleeting glimpses of normalcy: German students clutching their sugar cones, Ukrainian students greeted by bells and balloons, friends sharing much-delayed hugs across various continents. But zoom back a bit and that modicum of normalcy quickly fades into the background, obscured by masks, disinfectant sprays, distanced classrooms, shuttered hallways and one-way campuses.

Line up these photos from 16 different countries and you see the surreal mosaic of public education circa 2020.

See and share our global back to school gallery below, from England, where Education Secretary Gavin Williamson called students’ return to school a “massive milestone,” to China, where about 195 million students have already returned to in-person learning at public schools. 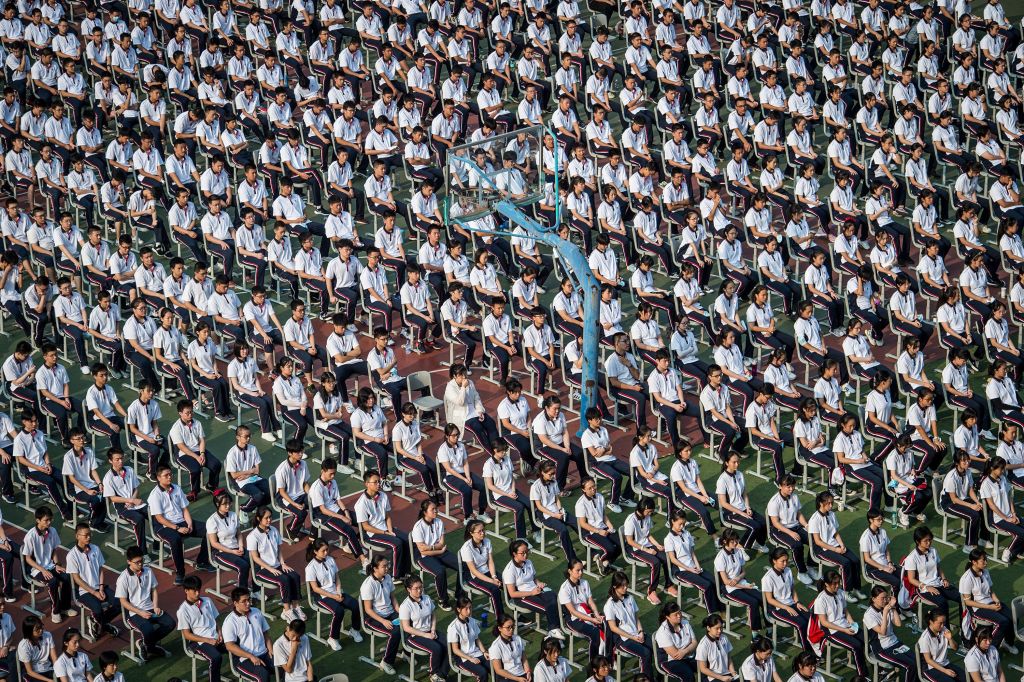 China: Students attend the 100th anniversary of the founding of Wuhan High School in Wuhan, where COVID-19 was first reported, on the first day of their new semester. (STR/AFP / Getty Image) 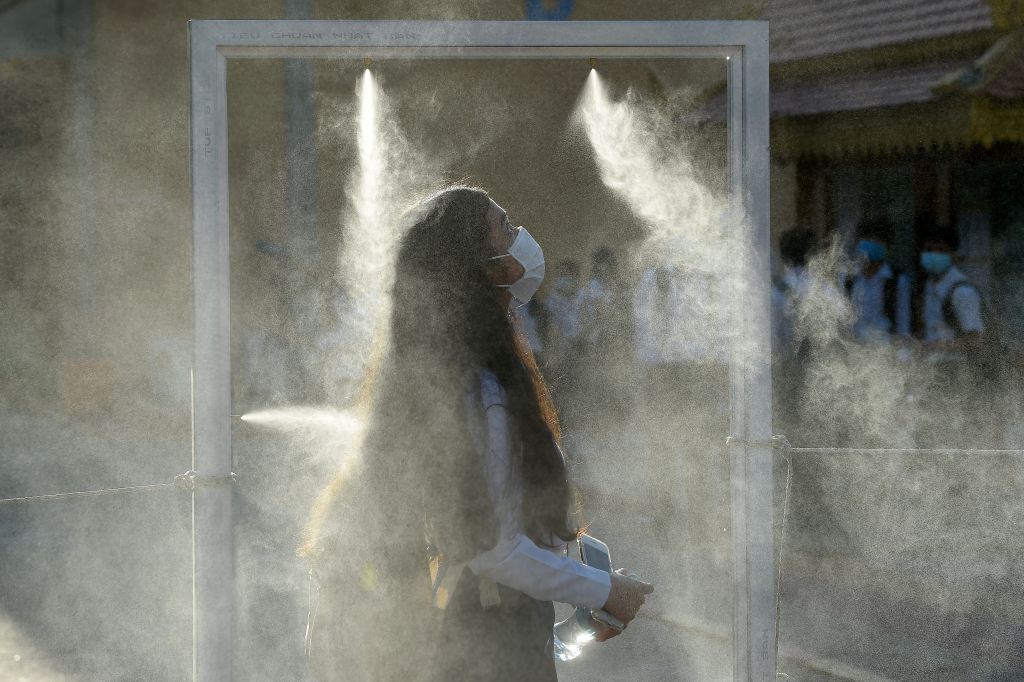 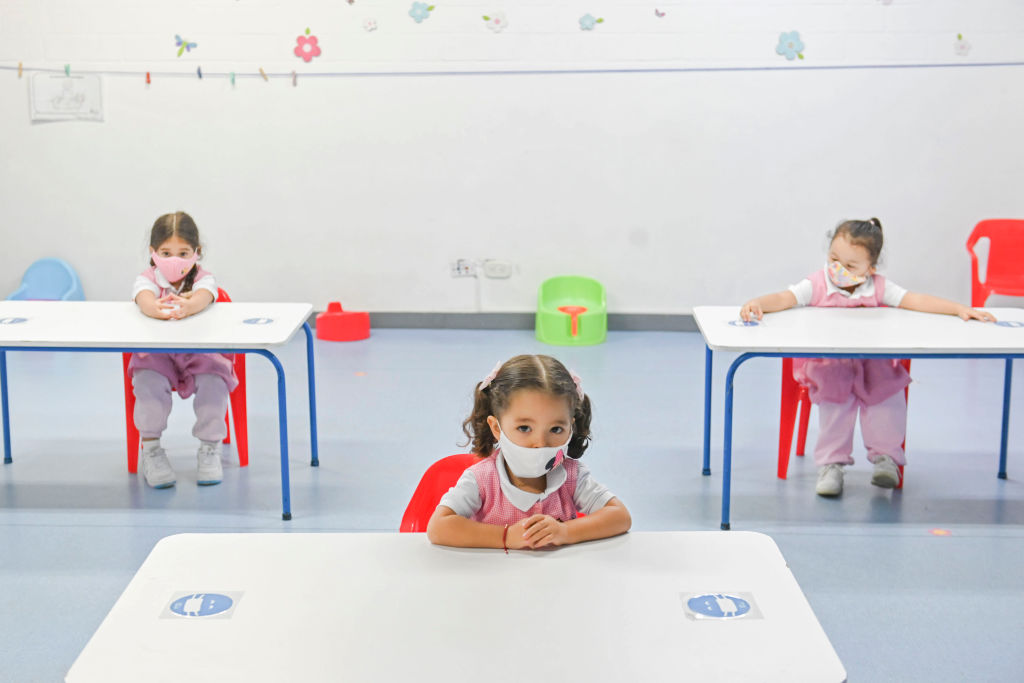 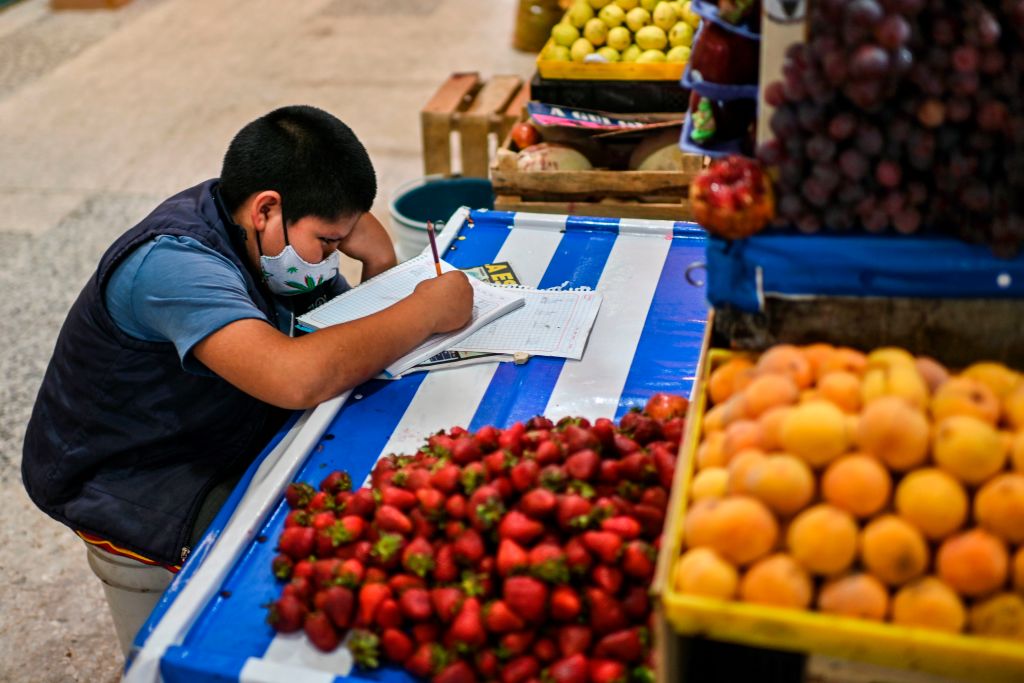 Mexico: Sebastian Gonzalez does his homework at his mother’s fruit shop in a market in Mexico City. About 30 million Mexican students began the new school year remotely with the help of radio and TV. (Pedro Pardo / Getty Images) 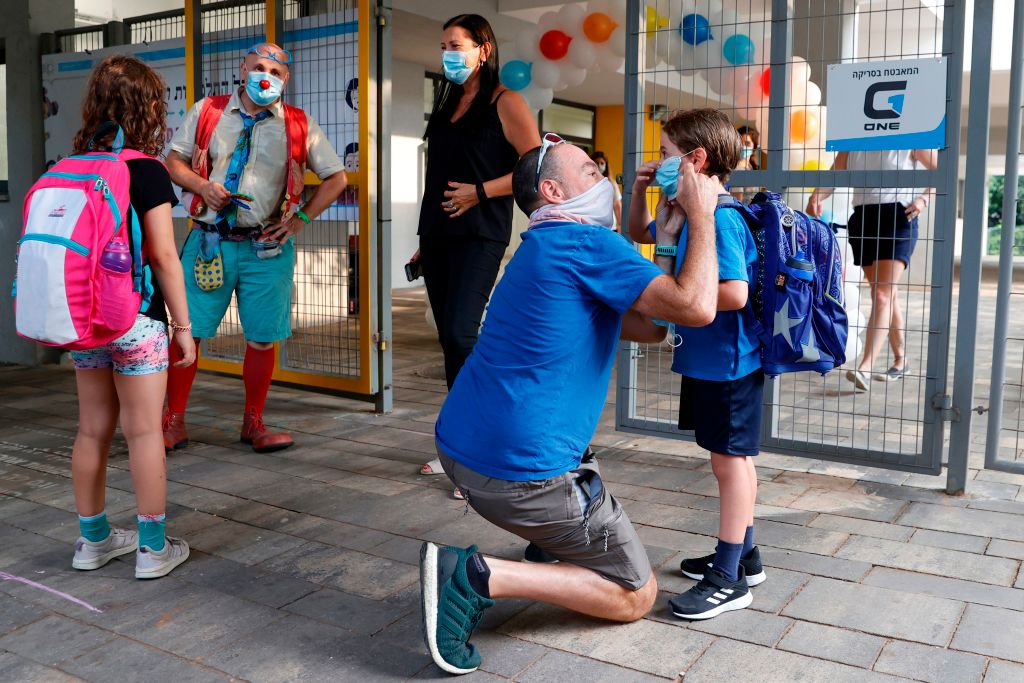 Israel: A student gets a quick mask adjustment before his first day back to school in Tel Aviv, where new cases are on the rise. (Jack Guez / Getty Images) 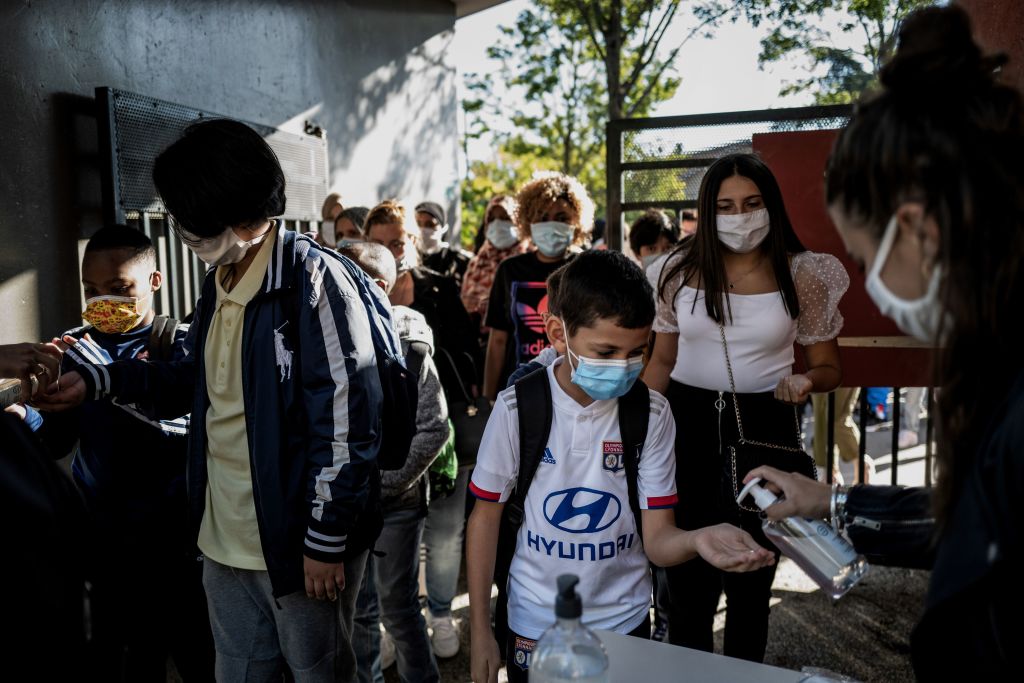 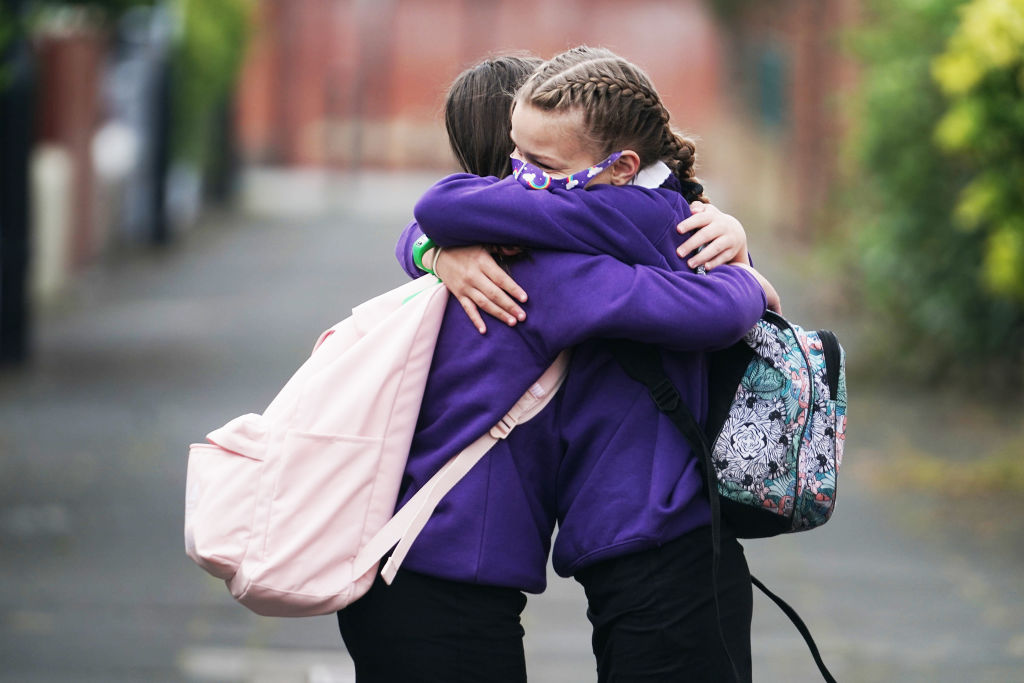 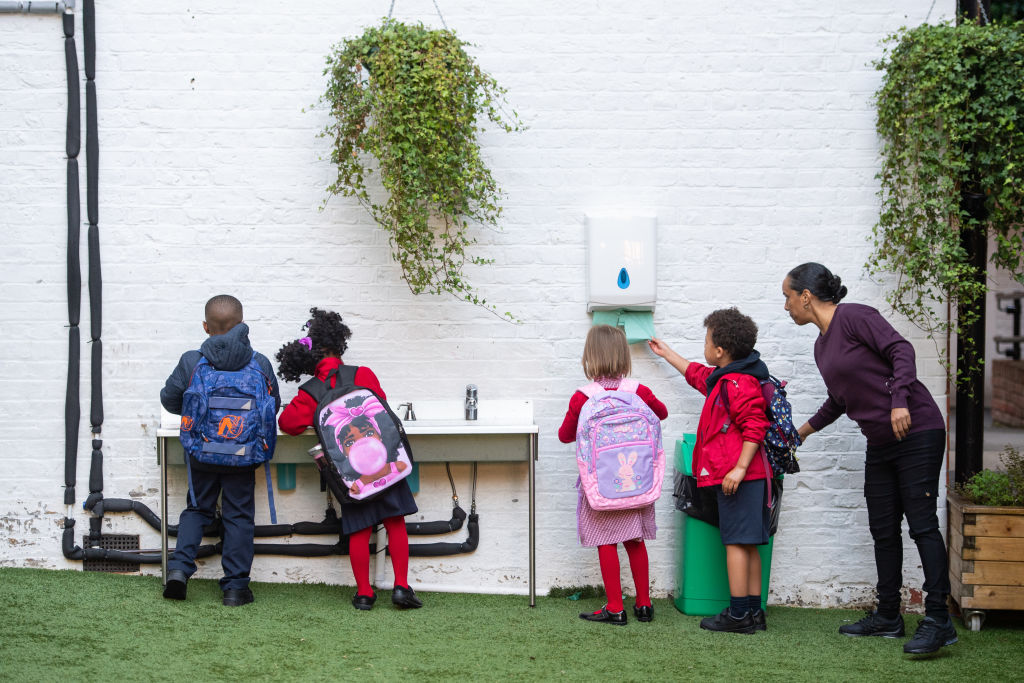 England: New backpacks and new procedures — pupils wash their hands as they arrive on the first day back to school at Charles Dickens Primary School in London. (Dominic Lipinski / Getty Images) 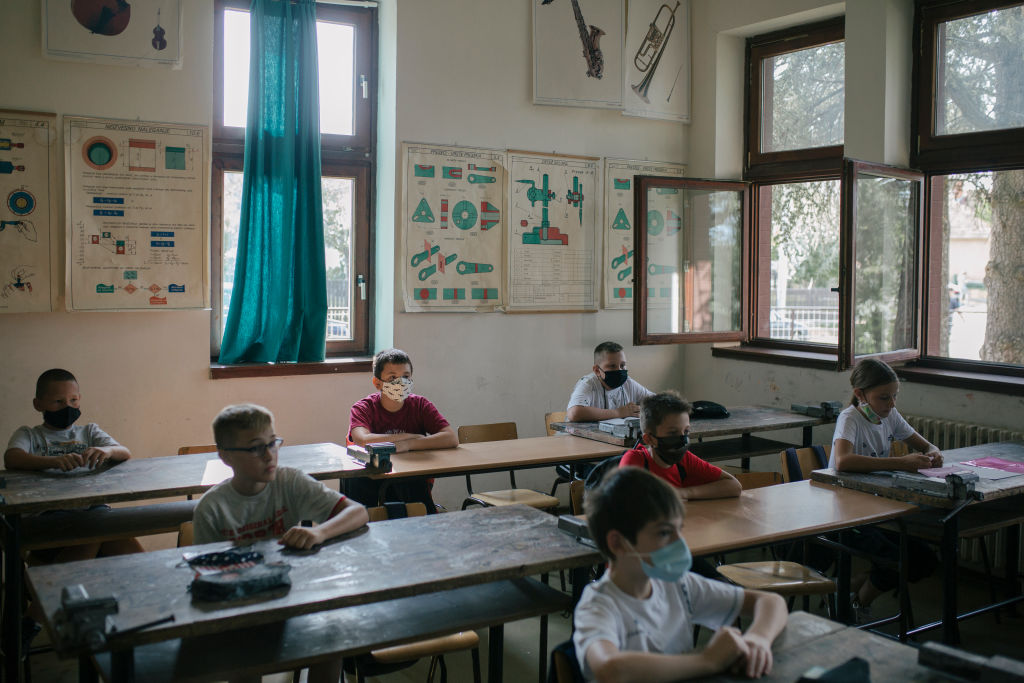 Serbia: A mix of mask-wearing and non-mask-wearing students in Jagnjilo on Sept. 1, the first day of their new school year, in an open-windowed classroom. (Vladimir Zivojinovic / Getty Images) 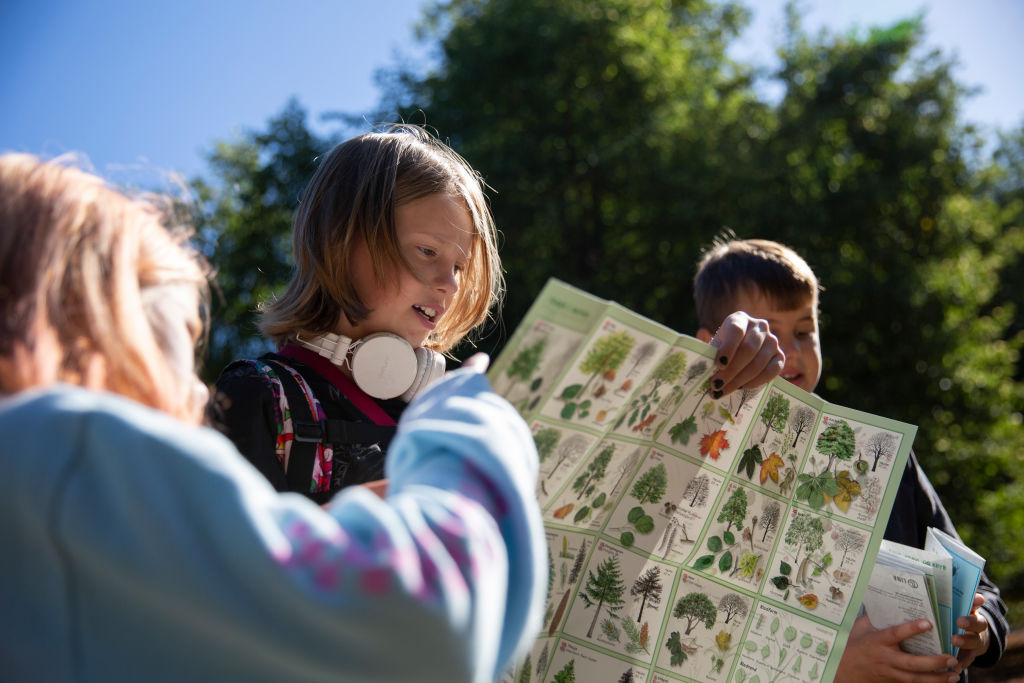 Denmark: The Samso Frie Skole in Samso holds science class outdoors on Sept. 7. The school has considered moving classes outdoors almost entirely, an idea they had pondered even before the pandemic. (Maja Hitij / Getty Images) 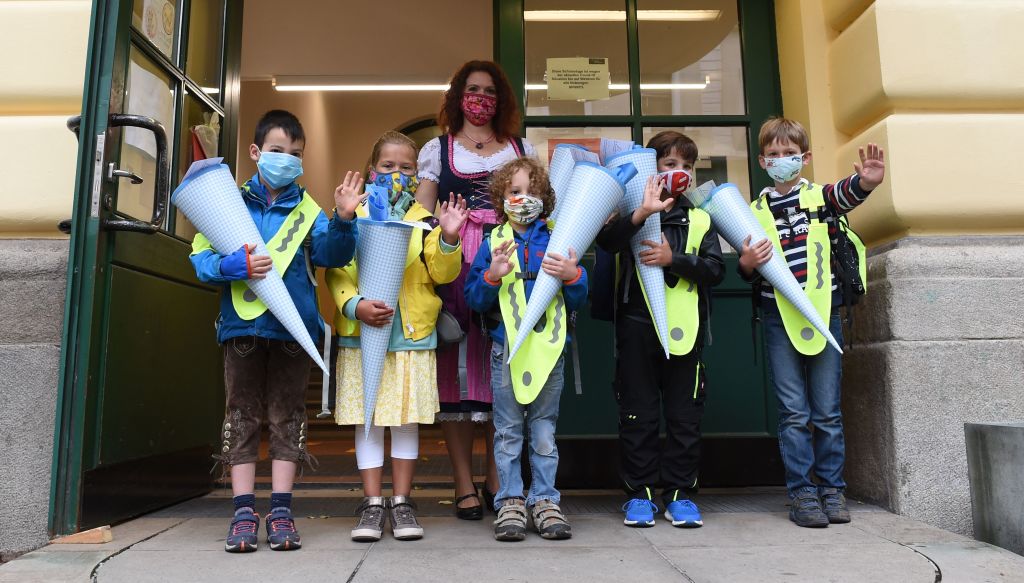 Germany: Elementary school students are required to wear face masks in Munich, where it’s also tradition for first-graders to be presented with Schultüte — decorated paper cones filled with treats — on the first day of school. (Cristof Stache / Getty Images) 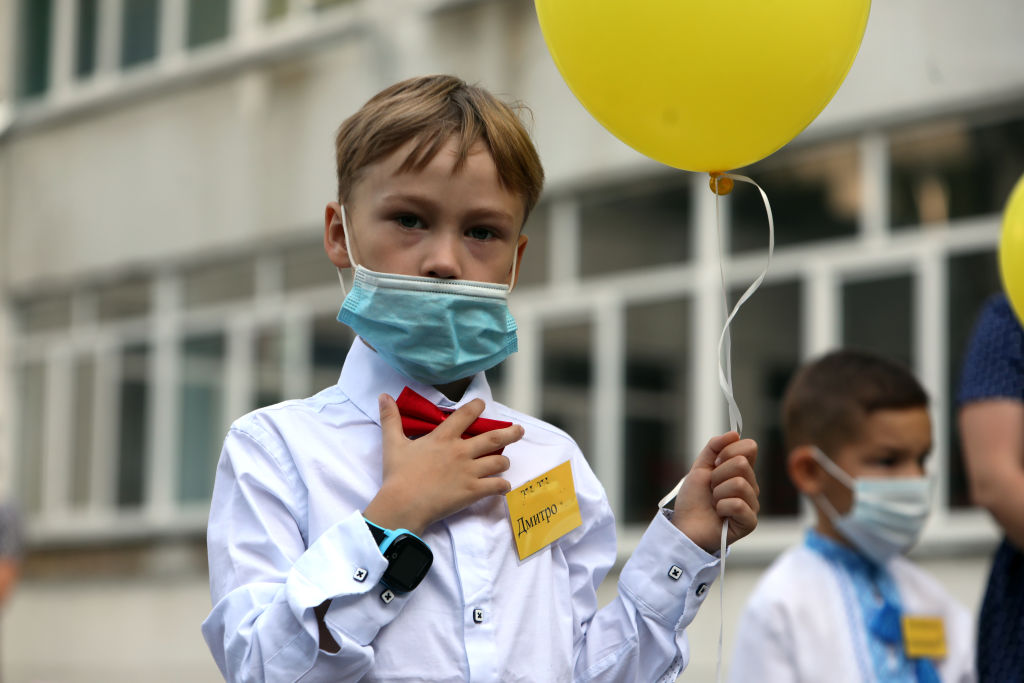 Ukraine: A student holds a balloon during a first-day-of-school celebration in Kyiv. (Yuliia Ovsyannikova/Ukrinform / Getty Images) 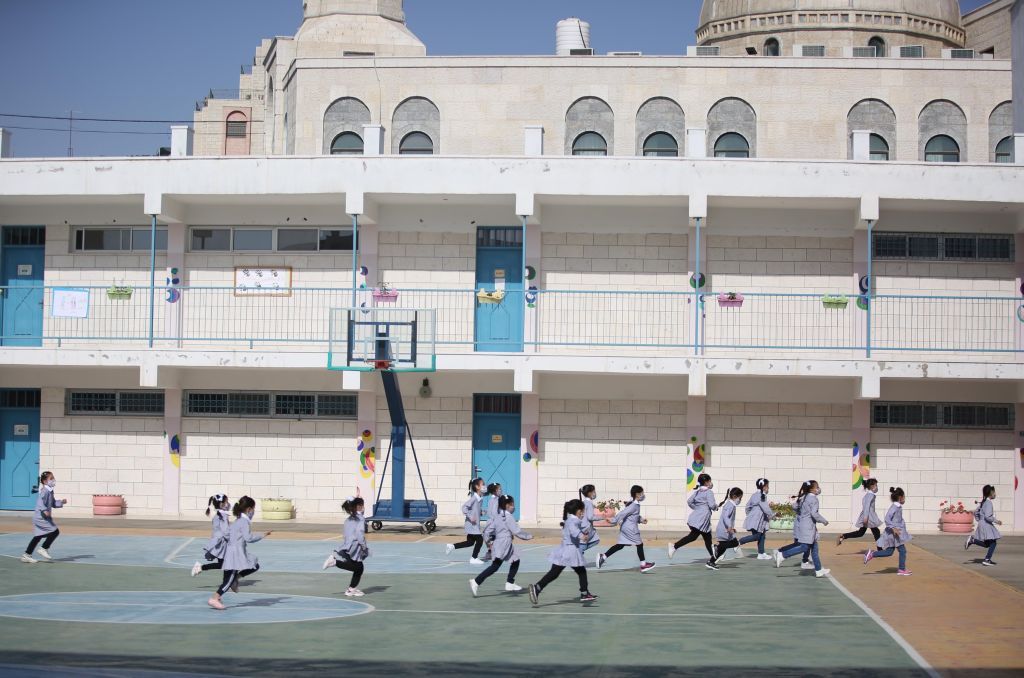 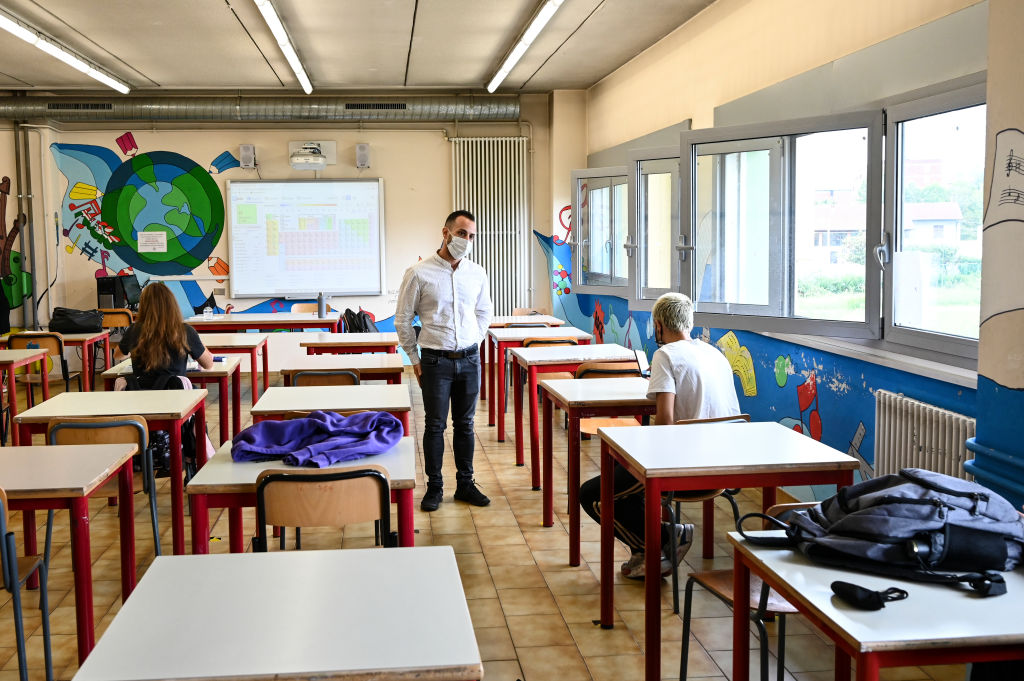 Italy: In a country that was once a hot spot for the pandemic, students at the Erasmo da Rotterdam High School in Turin return to a socially distanced classroom wearing masks. (Diego Puletto / Getty Images) 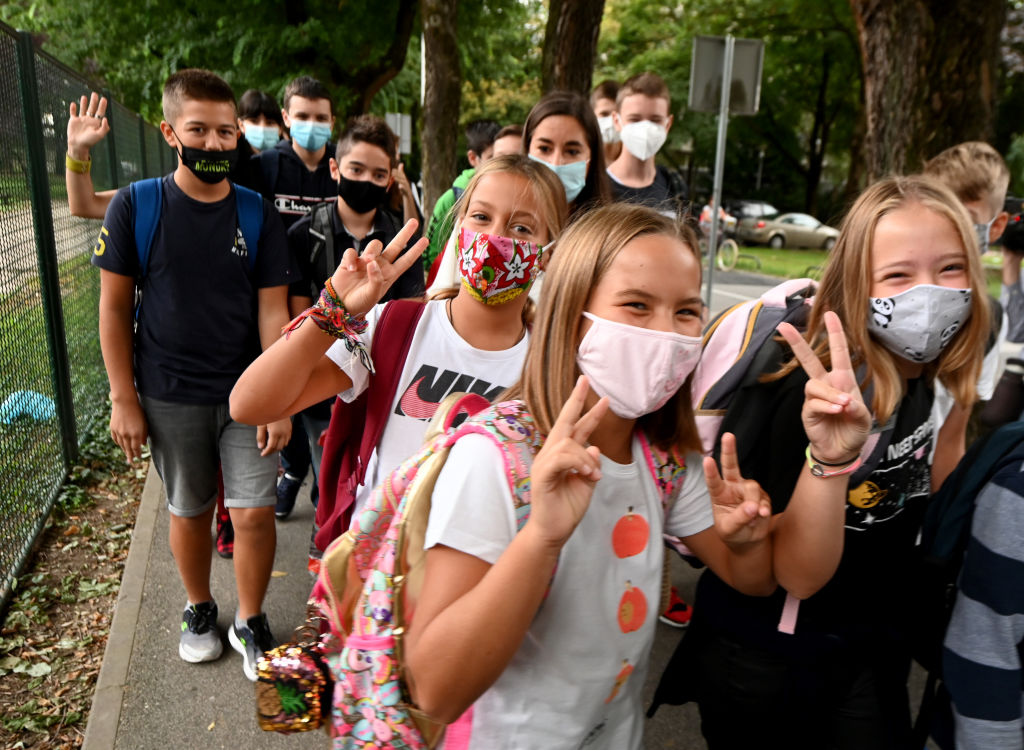 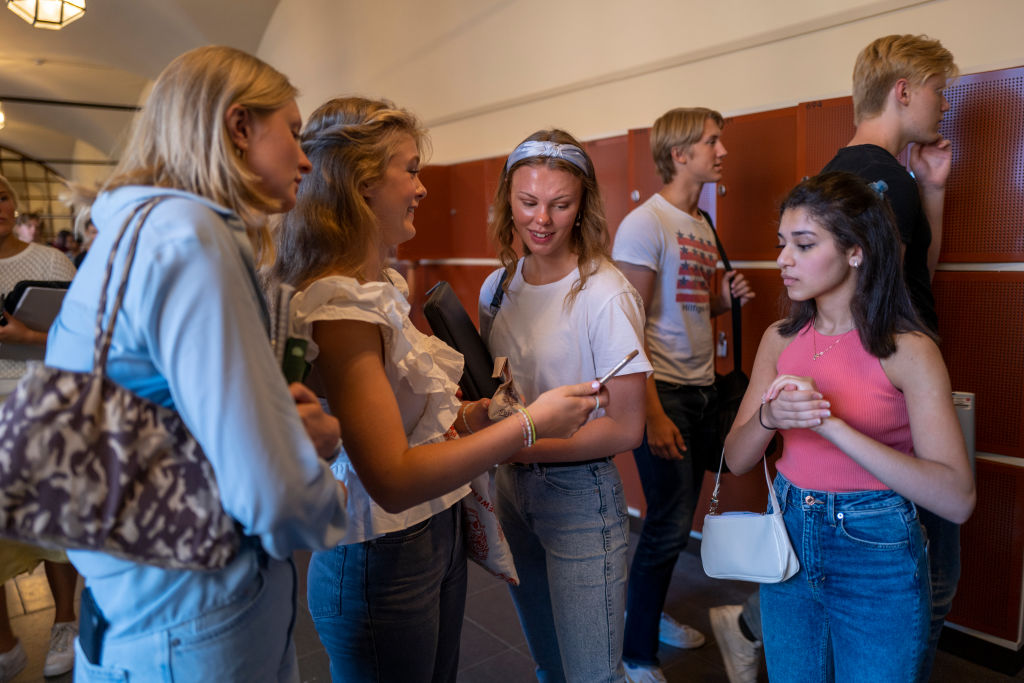 Sweden: A less-masked student body returns to the Ostra Real public school, which reopened using a hybrid schedule in Stockholm. Sweden, which did not experience a total lockdown during the pandemic, has one of the highest coronavirus death rates relative to population size in Europe. (Martin von Krogh / Getty Images) 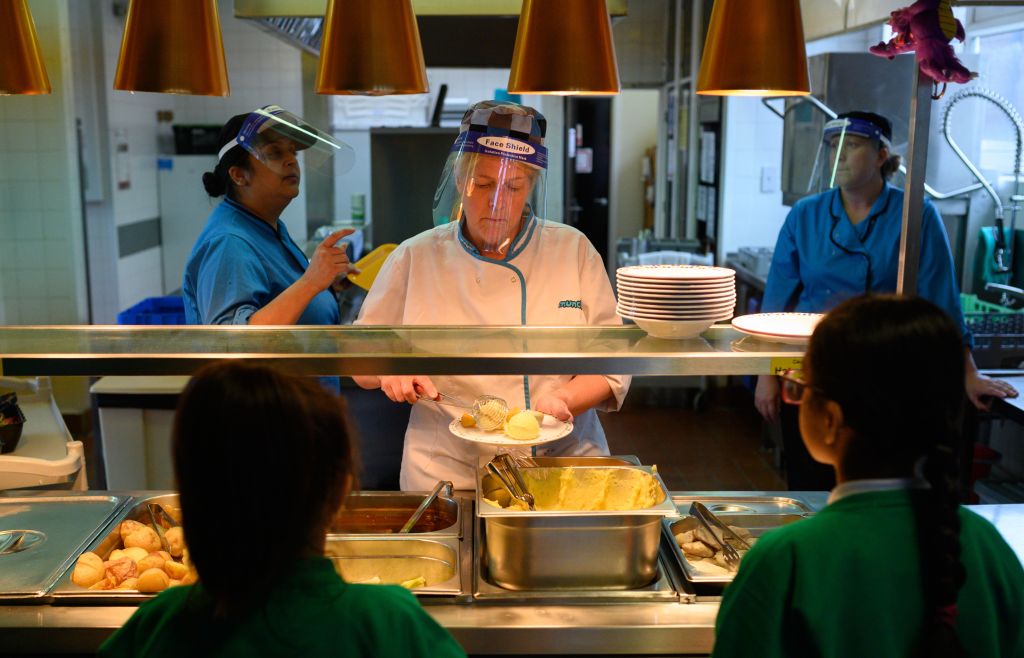 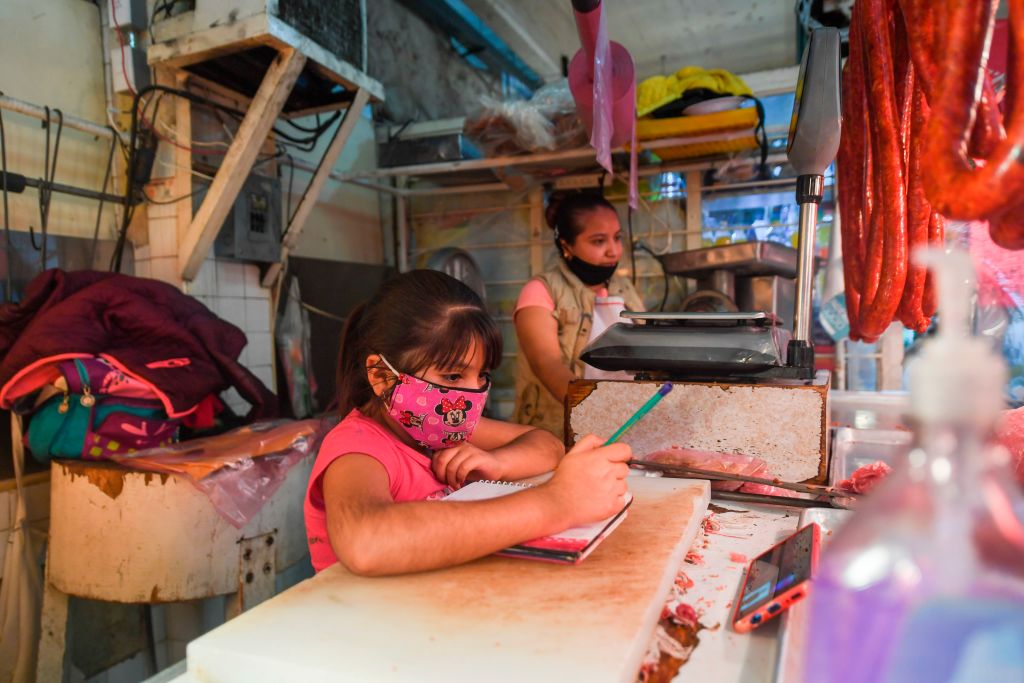 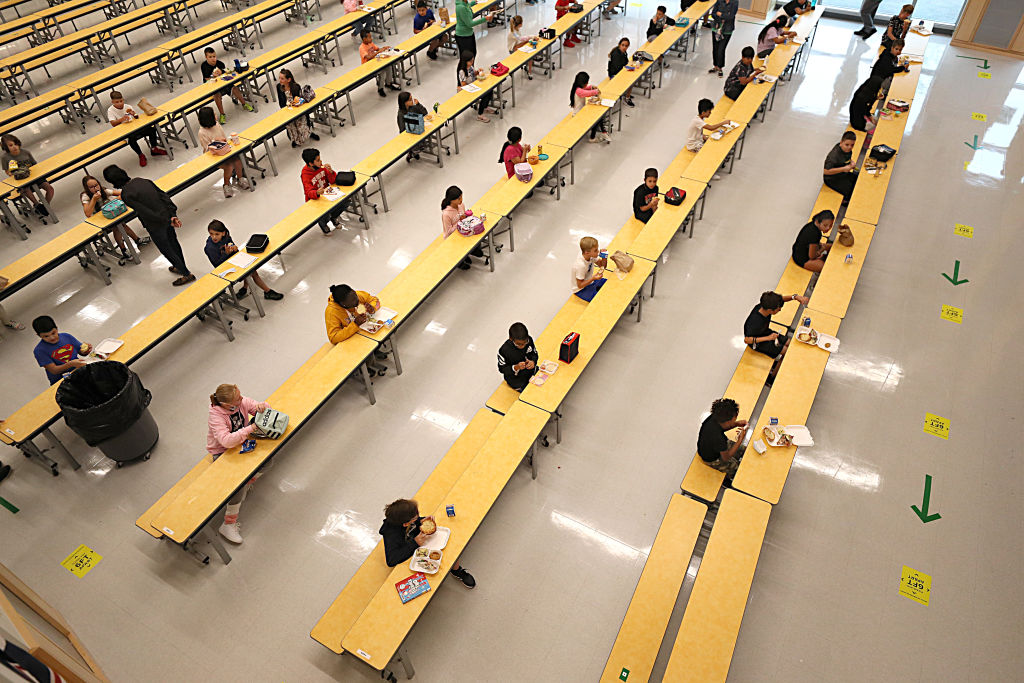 Massachusetts: Students are spaced apart in one of the rooms used for lunch at Woodland Elementary School in Milford, one of the first school districts to reopen in the state with a hybrid model. (Suzanne Kreiter / The Boston Globe / Getty Images) 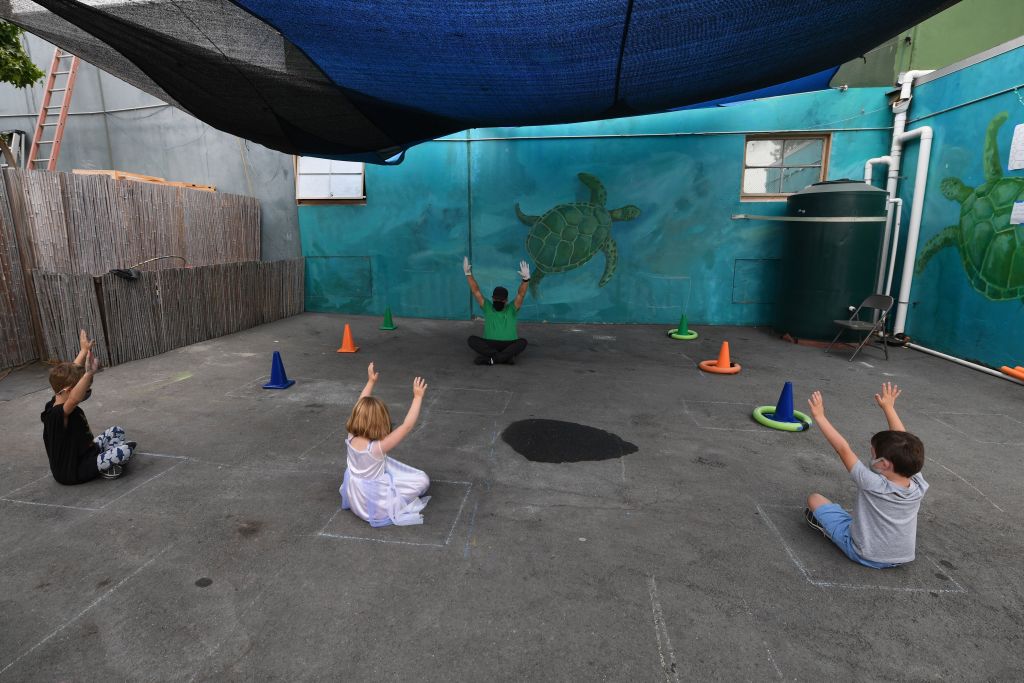 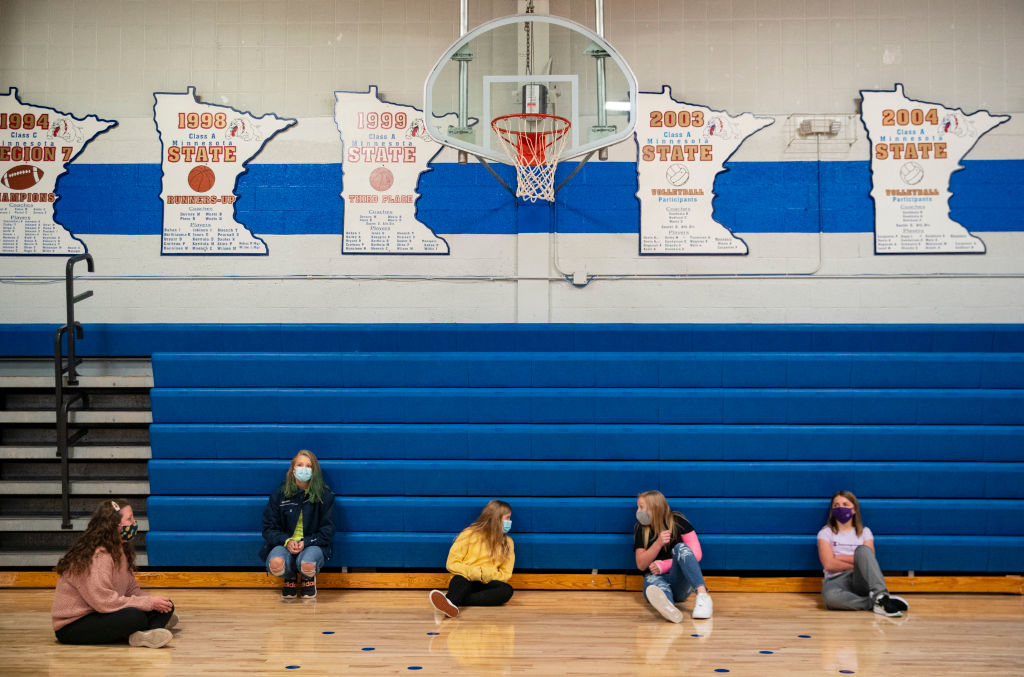 Minnesota: A group of seventh-graders talked to one another while maintaining distance in the Carlton High School gymnasium on Sept. 8, the school’s first day of in-person learning. Students and staff were required to wear masks and maintain social distancing in classrooms and the halls. After a first week back entirely in-person, the school has now switched to a hybrid model of learning whereby students split their time each week between in-person and distance learning. (Alex Kormann / Getty Images) 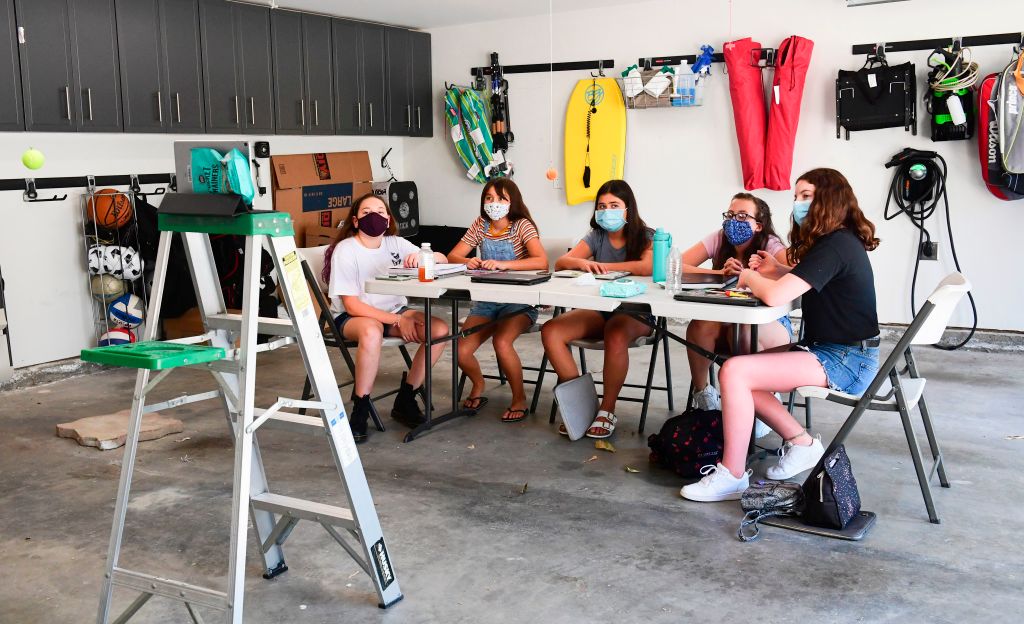 At Home: Seventh-graders Mia Friedlander (left), Ella Kingsrud, Taylor Credle, Hannah Cooper and Bella Rocco follow instructions online by tutor Robin Lorch from an iPad placed on a ladder in a home garage in Calabasas, California. As parents across the U.S. come to terms with remote learning this fall, many are opting for “learning pods” to help their kids, and themselves, get through the school year. (Frederic J. Brown / Getty Images)

New York: Students stick to their socially-distanced bubbles for their first outdoor dance party of the school year in Honeoye Falls.