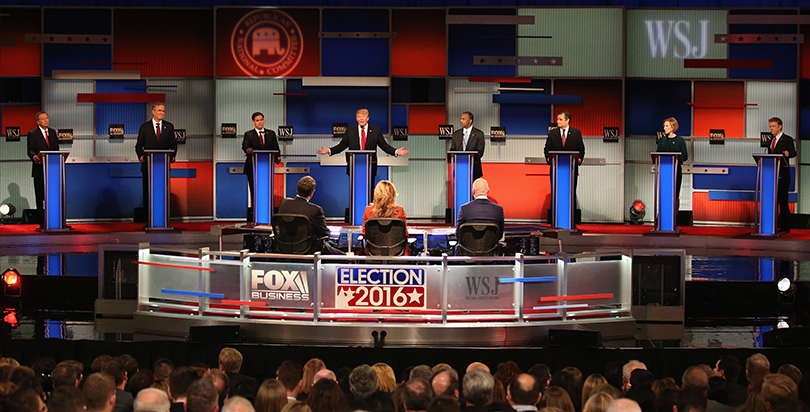 Republican presidential candidates Tuesday again largely skirted the issue of education, failing to tie K-12 education to the economy, the subject of the debate, and instead using it to ding traditional higher education.
Florida Sen. Marco Rubio, who has been surging in the polls, said the country shouldn’t raise the minimum wage but instead focus on reforming higher education, including emphasizing vocational training instead of the liberal arts.
“Welders make more money than philosophers,” he said, encouraging more vocational training as a way to raise wages without the risk of a higher minimum wage making  it more economical for companies to rely on automation and lay off human workers.
That welders-make-more-money claim was quickly debunked by media outlets: according to the Bureau of Labor Statistics, those who teach philosophy and religion earn about $30,000 a year more than skilled workers who fuse metal.
Rubio’s comments could be seen by some as an effort to reach the blue collar workers among GOP primary voters who feel slighted by a continued emphasis on a college degree as the way to really achieve success in America.
Later, Rubio a lawyer, continued beating up on higher education, saying the current model is “completely outdated” and that it’s too expensive, too hard to access and doesn’t teach 21st century skills.
On the campaign trail, Rubio has focused on his idea to allow companies to “invest” in a college student by paying his or her college tuition. The student would then repay the company a certain percent of his or her wages for a set amount of time. In the Senate, Rubio has co-sponsored bills that would allow non-accredited, innovative higher education programs to be eligible to receive federal funding.
Rubio wasn’t the only one to attack the “everyone must go to college” mantra.
Earlier in the evening during the “undercard” debate for lower-polling candidates, former Pennsylvania Sen. Rick Santorum dinged the president and others in Washington, D.C. including Republicans, “who think everybody has to go to college.”
Instead, Santorum said, we should provide opportunities for people to go to work right out of high school.
Both Rubio and Santorum oppose the Common Core State Standards, which aims to better prepare students for college and career. The Chamber of Commerce and other business groups, in fact, have backed the standards as a way to better prepare the American workers of the future.
Submit a Letter to the Editor
November 11, 2015