America’s pharmaceutical industry, a $333 billion business employing 854,000 people, is predicting a huge shortage of skilled employees over the next eight years — a deficit blamed in part on a lack of high-quality STEM education in U.S. K-12 schools.

A series of reports released Monday by the Pharmaceutical Research and Manufacturers of America (PhRMA), an industry trade group, highlight the need to buttress education in science, technology, engineering, and math to close a skills gap that the reports estimate will result in 60 percent of 3.4 million industry jobs — approximately 2 million — going unfilled by 2025.

One report cites results of the Programme for International Student Assessment (PISA), an academic test given to teenagers around the world, that consistently show U.S. high schoolers lagging well behind students in many other developed countries in math and science.

American ninth-graders rank 36th in math literacy and 28th in science among all 65 countries and regions tested, the report said.

Though researchers caution against drawing too many conclusions from international standardized tests, in part because the results are not always adjusted for students’ backgrounds, the report also notes that American college students are less likely to pursue a degree in science or engineering than students in countries such as Japan and China — and just one-third earn a bachelor’s degree in one of these fields.

(The 74: The Cult of Finland: What American Schools CAN’T Learn From International Comparisons)

It’s not all bad news for STEM education in the U.S., though: The report says that nearly every state has implemented STEM-related workforce and education programs and initiatives that include K-12 schools, colleges and universities, and workplaces.

Graduates with experience in the STEM fields will likely find a burgeoning job market awaiting them. PhRMA’s report finds that not only do STEM jobs pay 81 percent more than the average occupation — $87,524 in 2015, compared with $48,320 — they are also growing more than twice as fast.

“The American biopharmaceutical industry is the global leader in research and development and has delivered many of the treatments and cures that have saved millions of lives around the world,” Anne Pritchett, PhRMA’s vice president of policy and research, said in a statement.

“Yet, these advances and breakthroughs are only possible through continued support of public policies that promote a highly skilled, diverse American workforce; support a science-based regulatory system; and ensure a level playing field with robust trade policies and intellectual property protections.” 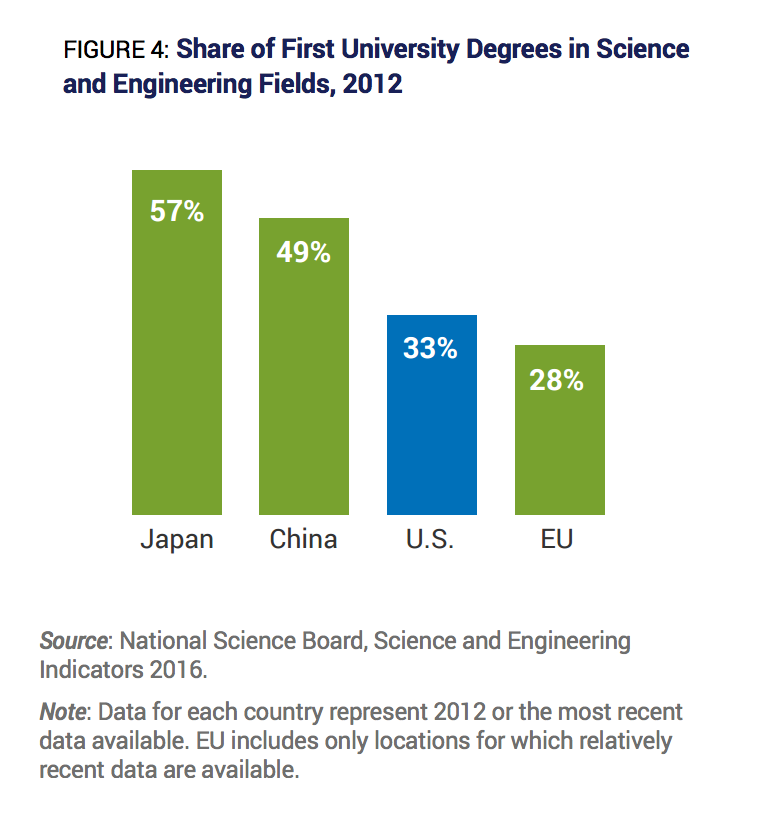