Phalen: Modest Reforms Are Not Enough to Give Millions of Kids a High-Quality Education. We Need Bold Action to Transform Our Schools 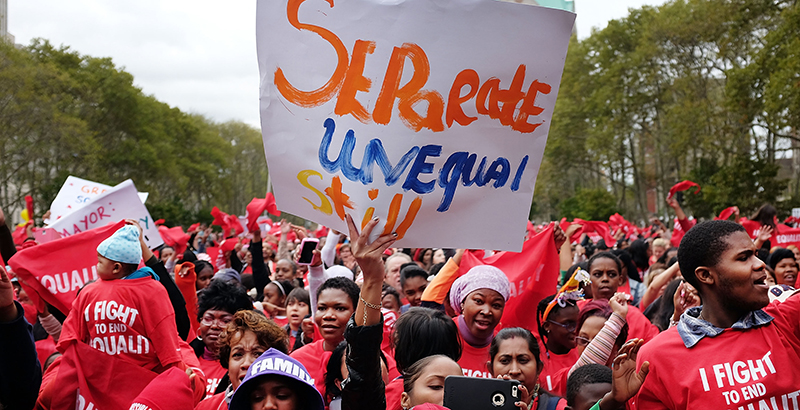 Thousands of students, parents and educators rally in Brooklyn demanding an end to what they describe as separate and unequal education in New York City schools on October 7, 2015. (Spencer Platt/Getty Images))

Many believe that the historic Brown v. Board of Education case was only about integration. It wasn’t. It was truly a courageous effort to leverage the legal system to help ensure that through education and hard work, all children can fulfill their tremendous innate potential.

While this value was one of the fundamental pillars of our great nation, it was not the reality for many. For many American children, education — in addition to housing, health, safety and access to capital, to name a few — was both separate and unequal.

Brown was an effort to ensure all children had access to a high-quality education that, when combined with their hard work and effort, would position them to pursue their dreams. Sixty-five years later, while there has been so much progress in so many areas, access to a high-quality education is still out of reach for millions of American children. By conservative estimates, nearly 9,000 of our nation’s 98,000 public schools are abysmal. Every day, 5 million children are being separated further and further from their tremendous, God-given, innate talents. Every day, we are setting up millions of our children to fail.

Although many initiatives and billions of dollars have been invested into reforming our schools over the past few decades, those efforts have produced only modest improvements. Other efforts to improve the quality of education for all American children have focused on offering low-income families choice, through charter schools and, for those who could afford it, vouchers. Charters, when implemented well, have brought the vision and spirit of Brown to life: Institutions like the Kauffman School, Brooke Charter School, Success Academies, Rocketship, KIPP, IDEA Public Schools and many, many more have provided excellence and given children the opportunity to transform their futures — and their families’ futures — through a good education.

Unfortunately, modest reforms to traditional public schools, and the development and expansion of charter schools, cannot solve this problem alone. Today, charters make up only 5 percent of the schools in the United States, and while many have been exceptional, many more are mediocre at best and horrific at worst.

More and more, I believe that we must take bold action in transforming our nation’s failing public schools, where most of our children currently go. Organizations such as Green Dot, Democracy Prep and Friendship Charter Schools are demonstrating that not only is school turnaround possible, it can be done in authentic collaboration with our public school districts and educators. In fact, their models’ successes are centered on collaboration, realizing the genius of Brown to create positive change from within the system, thus closing the gap between what is needed today and what is possible tomorrow.

Because of the valiant and courageous leadership provided by several of these nonprofit organizations, Phalen Leadership Academies entered the turnaround space. Founded only six years ago, PLA, named in honor of my parents, has already successfully transformed five F-rated schools into A-rated schools. And we did this with most (87 percent) of the same staff, a strong educational model and a fierce urgency that reflects our love for our scholars.

Today, millions of American children are attending schools that are chaotic and unsafe; where little teaching and learning is taking place; and where students are being pulled further and further from who they are meant to be. I truly hope that those who can and those who care use every ounce of their power to give these and all our children the education and the futures they truly deserve.