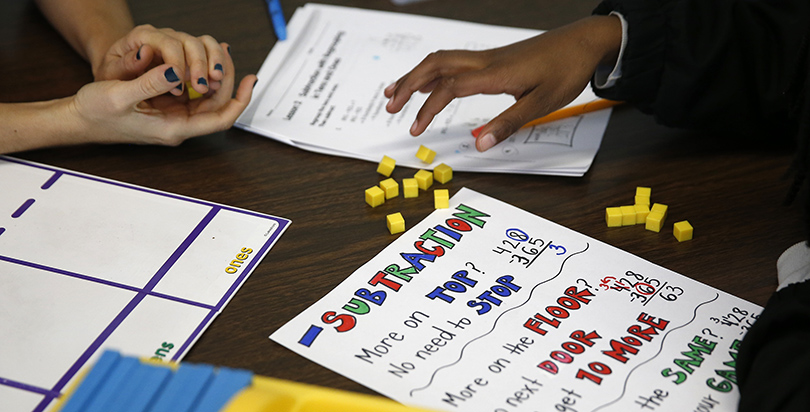 These are among the findings of a new RAND Corp. study of 40 schools nationwide — 31 charters and nine traditional schools — that are part of the Bill & Melinda Gates Foundation’s Next Generation Learning Challenges’ Breakthrough School Models program. The research, released today, was conducted for the foundation and follows up on a 2015 report, delving into what the implementation of personalized learning looks like in schools and how the practice may play out as it is adopted more broadly.

Researcher John Pane tells The 74 that models of personalized learning — defined by RAND simply as “instruction that is focused on meeting students’ individual learning needs while incorporating their interests and preferences” — varied greatly among the 40 schools, giving him and his colleagues a richer picture of how implementation differs around the country.

“Early in the exploration of a new idea, I think it makes a lot of sense to try a variety and see what seems to work,” says Pane. “Without evidence that one particular way is the best way, it makes sense to try different things and adapt and learn from the experience, but it does make it harder to say what [personalized learning] is exactly. At some point, as people want to scale it up, it will be more important to find a more precise model so people know what to do, expect, and implement.”

The new research, Pane says, gave the team a deeper understanding of the positive effects of personalized learning found in the 2015 study, and how those results may play out in a large-scale implementation.

The researchers found that students engaged in the personalized model gained 3 percentile points in mathematics relative to a comparison group of similar students. Reading showed a similar positive trend, but with non–statistically significant improvement. The increases, though, were evident across all geographic and demographic groups.

Pane says there are other potential benefits to personalization — such as improving student characteristics like grit and mindset — that cannot be gauged using math and reading scores. “I think it is a measurement problem rather than schools not influencing skills,” he says. “That is a problem education faces: How can we accurately measure these skills that go beyond test scores?”

Pane says the study also found another aspect needing more exploration. Children who fall behind at an early age have difficulty catching up, especially when they are exposed to new material at the same pace as their peers. Most schools, Pane says, don’t have a realistic way to bring these kids up to speed.

“What seems promising about personalized learning is it meets every student where they are and develops basic skills and fundamentals built upon to accelerate achievement,” he says. “If a student is behind, you address those weaknesses before teaching new things.”

One of the challenges, the report found, is implementing personalized learning on a large scale. “If it becomes widespread, should we expect to see this large effect?” Pane asks. “The current report gives some tempering of expectations. While positive, it might not be quite as fantastic in large scale.”

Pane says that anytime a practice scales, success shrinks. A key factor here, according to the report, is that the pioneers of schoolwide personalized learning came from charter school networks with the flexibility to create schools that function differently than those in traditional districts. “As we look at scaling and implementing in typical schools and with pre-existing resources,” Pane says, “operating policies have not necessarily been optimized for personalized learning, making it harder to implement.”

The study found tensions between key aspects of personalization on the one hand and pressure to meet grade-level standards on the other — along with a lack of time for teachers to develop personalized lessons. These tensions ratchet up in traditional districts.

“Those three things together,” he says, “make me think it is a promising initiative.”

The Bill & Melinda Gates Foundation provides funding to  The 74.

This article has been updated to clarify attribution of the benefits of personalization on student characteristics such as mindset and grit.