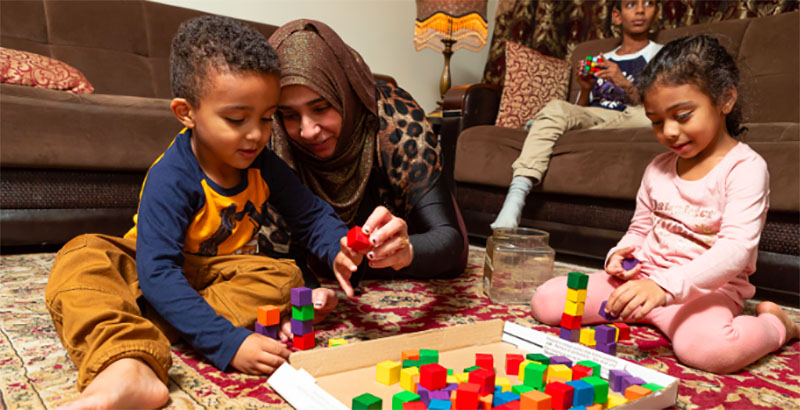 Having studied educational technology for more than two decades, I’ve seen how quickly reactions to children’s media swing from affection to panic and back again. Take, for example the release in November of A Beautiful Day in the Neighborhood — which renewed attention to Mister Rogers’ Neighborhood, a popular kids’ TV show for over 50 years — while other headlines decried the damaging effect of screen time on brain development.

However great the pull of these two poles are, the middle is where we find families making daily decisions about media use. It’s also where we discover sensible solutions to ongoing educational challenges, like how to give young children a meaningful start in science and engineering learning. That’s certainly the case with a study my colleagues and I recently released, an eight-week randomized controlled trial designed to investigate the effect of digital media platforms on young children’s science and engineering learning.

What we found was that a popular and award-winning series on PBS KIDS, Dr. Seuss’s The Cat in the Hat Knows a Lot About That!, created as part of the U.S. Department of Education’s Ready to Learn Initiative, increased the science learning of young children living in low-income households in just under two months. (Our independent study was commissioned as part of the initiative, a federal program that invests in educational media to promote early learning and school readiness.)

Our sample included 454 children, ages 4 and 5, who were assigned to one of two groups. Families in one group received a tablet computer with a data plan and instructions to use the educational software on it for one hour a week. On the tablet were 28 The Cat in the Hat Knows a Lot About That! videos and a digital app with five games, such as Bridge-a-rama, which focuses on inclines, and Slidea-ma-zoo, which allows children to manipulate slides and explore friction. Families also received a handful of real-world activities, such as “Measuring This and That,” which provides instructions for constructing and using homemade measuring tools.

The other group also received a tablet with a data plan and general instructions to use the tablet to access educational online games, apps and videos for an hour each week, but PBS content, including The Cat in the Hat Knows a Lot About That!, was blocked.

To understand whether the study resources affected the children’s understanding of science and engineering concepts and practices, we used a variety of measures, including an externally developed and validated science assessment (Lens on Science), a performance-based assessment, back-end data from the tablets, parent interviews, surveys and media logs.

The result: The study resources had a clear, positive effect on the children’s understanding of physical science concepts related to matter and forces.

Here are some key takeaways:

Media can do much more than sell and entertain

Producers of the series developed the broadcast video, digital games and real-world activities to target important school-readiness concepts and skills and encourage active early science and engineering learning. Two young characters, Sally and Nick, pose questions and define problems about the natural and human-designed world they encounter in their backyard, turning the Cat into a guide much like an engaged parent. This approach — talking to kids versus at them—made the educational content current and approachable.

STEM opportunity gaps are not inevitable

There is no way of knowing which kids are going to light up from opportunities in science, technology, engineering and math (STEM), which is why all children ought to be given rich, early experiences. Unfortunately, many kids, while innately curious about the natural and built world — what one participant in a 2018 survey of more than 1,400 parents that we conducted as part of the Ready to Learn initiative described as “the why of things”— do not have the support that allows them to explore important and age-appropriate science and engineering concepts and practices.

The fact that the diverse sample of children in our study, all living in low-income households, increased their knowledge of physical science as well as their ability to engage with science and engineering practices is extremely promising. Think inclines and bridges, texture and force, and other essential STEM building blocks. Children know in their bodies what it is to zip down a slide or roll a ball down a hill, but it’s something entirely different to begin to understand the physics underneath these actions and to possess powerful words like cause, effect and measure.

Digital learning experiences can jump the screen, even for young children

Although our study was conducted to investigate the premise that digital media can be a powerful tool for supporting young children’s science and engineering learning, it would not have been satisfying to confine that learning to a computer. Instead, the researchers assessed the preschoolers by giving them real objects to manipulate, asking them to take what they had seen, heard and played on the screen and transfer it to objects they could hold, move and test.

For example, to test their understanding of surfaces and friction, children were provided with three slides with differently textured (rough/smooth/sticky) surfaces and asked to choose the one that would enable a toy figure to slide down the fastest. This ability to transfer is a big deal, perhaps all the more so in this case because it shakes up the notion of digital versus hands-on experiences. With well-designed resources, the two can work together rather than remain at odds with one another.

These resources are available to everyone

The program at the heart of our study, The Cat in the Hat Knows a Lot About That!, was developed as part of the Ready to Learn Initiative in partnership with the Corporation for Public Broadcasting and PBS. Because all the new videos, digital games and hands-on activities are available through PBS KIDS, a free service that reaches households across the country, they are accessible by all families regardless of income or prior science experience.