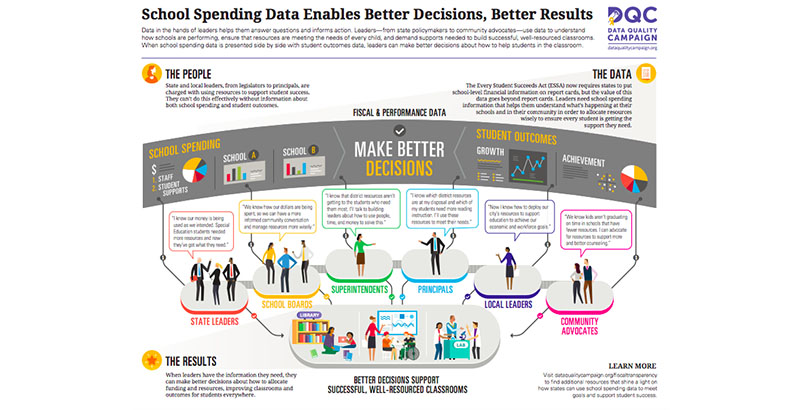 Plenty of very smart people have written about how, despite policy efforts to funnel resources to the students who need the most support, like English learners and kids who are raised in lower-income households, it doesn’t always work out that way. At times, district leaders may not even be aware that the way they’re spreading dollars across schools disadvantages some students. Fold in the fact that the most experienced, and therefore most expensive, teachers often work in schools with fewer of the students who need the most help, and it becomes clear that the way dollars are allocated within a district may not be what we would hope.

Motivated by this reality, the federal government for the first time this year is requiring transparency about spending at the school level, including actual —not average — teacher salaries, in state report cards.

Specifically, the Every Student Succeeds Act requires that states include on their report cards:

This school-level spending data, from the 2017-18 school year, is required on states’ next report cards, which — based on when states published this year’s — could come out anywhere between August and January. But including this information leads to more questions than answers: So what? What happens now? If states build it, will they come? And who is “they,” anyway, when it comes to school spending data? I know I am not alone in grappling with this question over the past four years since Congress enacted ESSA and included this new school spending transparency provision. But, based on what we know about data use and report cards in general, I’ve got some ideas.

State leaders need to create a vision for why this information matters.

School spending transparency is required by federal law — but that doesn’t automatically mean it will matter to the public when it is published. Certainly members of Congress saw the value when they included the requirement, but states, along with a broad range of education stakeholders, still need to tell the public why this information is important. State leaders need to set the vision about the value of this information and the story it tells about school quality and student success. Without that context, school spending data have far too much potential to live as a compliance-driven box-checking exercise that provides little context for meaningful decision-making. Given the investments that states and districts are making to collect, report and improve the quality of the data, that would be a waste.

The information won’t be useful unless people can find it.

The spirit of the ESSA requirement is that multiple stakeholders need and deserve transparency about how school dollars are being used to support student success — and whether resources are getting to the students that need them most. By that measure, this new transparency about school-level spending is a win. But as the Data Quality Campaign’s research shows, “put information on a report card” isn’t always the same thing as transparency. It will take effort by state leaders to make sure the data are findable and easy to understand, and they should make it possible to view school spending data side by side with student outcomes.

States must figure out who their target audience is, without shutting out other stakeholders.

Who will be most interested in digging into this information is an open question. While the conversation about designing report cards has been focused on parents, there’s not as much agreement that families are the audience for the new spending data.

Maybe parents are not the primary audience for this information — I’ve heard much more discussion, and concern, about reporters and advocates. But that assumes that parents won’t care or be able to understand the information. As with any complicated data point, whether it be student growth or school spending, context, clear language and the ability to dig deeper are critical. That’s true no matter who your audience is.

The amount of context that states include with their school spending numbers will vary. All that federal law requires is reporting of actual, building-level teacher salaries and a breakdown of federal versus state and local dollars. States may not explain what types of expenditures (e.g., buses, districtwide counselors, textbooks) are attributed to the district rather than the school. There will also likely be flexibility in how districts make those decisions and report their expenditures to the state — so schools within one district may look slightly different than those in the next district without much actual difference in how dollars are used. Guided by the vision they developed, states will need to help people understand the “so what” of the data. That includes providing some context, for instance, questions to consider, or a little information on how to interpret the data.

State leaders, advocates and communities should take action informed by the data.

This school-level spending information is needed and has the potential to be useful, but we don’t know yet what actions will be taken once it’s out there. Much of the value of the information is understanding how spending plays out at different schools within and across districts. Right now, 19 states offer the ability to compare between schools on their report cards. But it has yet to be seen where school spending data will live among the many other student performance measures and school characteristics on these report cards. More states should consider building comparisons into their report cards; every state should find ways to make sure spending data and student data live side by side.

School spending data are incredibly valuable for informing conversations about school quality. These are conversations we should all be having because it’s important that school-level spending data, and the ability to meaningfully compare how schools are allocating resources, land with a well-deserved splash. By doing this work, state leaders are ensuring that they — and others, like advocates, parents and community members — can have much-needed conversations about equity and what students need to succeed.