Parents Want to Know: Are All Those New ‘STEM Boxes’ Worth a Subscription? 3 Grade-Schoolers Put the Kits to the Test 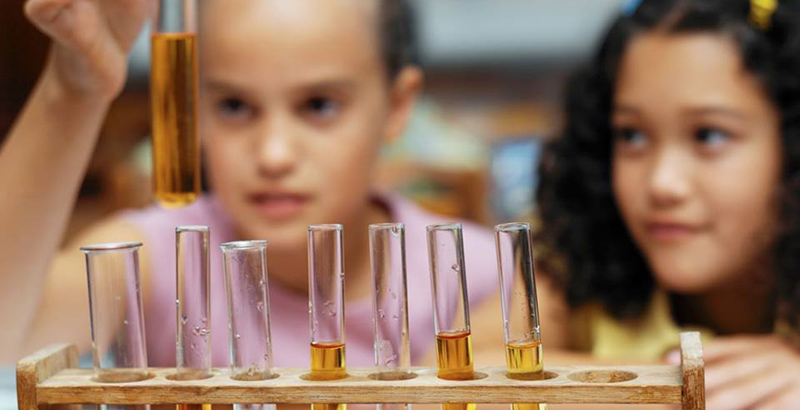 As a parent, you realize there isn’t much that excites a kid as much as anticipation, but you also want that anticipation to result in value. So as STEM subscription boxes are becoming more and more popular, we asked three school-age girls to test out a few of the boxes to learn the pros and cons (mostly pros) in each.

The 74 contacted a handful of companies involved in subscription STEM packaging. Four sent test boxes: Tinker Crate, StemBox, Creation Crate, and Groovy Lab in a Box. Each has a different angle on STEM — science, technology, engineering and math — and raised different levels of excitement during testing by three sisters, ages 13, 11, and 9. 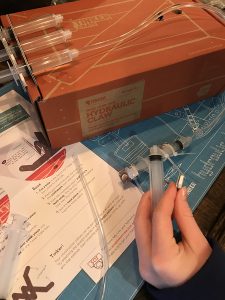 Owned by KiwiCo, which also has an arts and crafts box called Doodle Crate and a trio of boxes for children under 9 years old, Tinker Crate sent its Hydraulic Claw for testing.

Young engineers use it to make a hydraulic pump out of syringes and tubes that then moves cardboard claws attached to the ends. “It was very exciting once you got it to work,” said the 11-year-old. “It was a bit tedious, but was worth it in the end.”

About an hour’s worth of work moved the creator through the instruction booklet, which couldn’t have been clearer or designed any better. Along with the instructions for the Tinker Crate package, each box contains a Tinker Zine that offers a kid-friendly lesson in the box’s focus, extra experiments using the supplies provided, and real-world examples of the engineering in use.

All three ages were able to fairly easily navigate the instructions on their own to produce the movement of the first claw. Creators could keep going, building larger and larger and creating a more robust contraption. By incorporating additional components of the system, the Tinker Zine suggested above-and-beyond experiments.

There’s no doubt Tinker Crate puts a focus on the “E” in STEM, and you can expect that to remain fairly true for other boxes as well, although they also feature projects ranging from wiring up optical fiber to creating glowing constellations to building — and firing — a functioning trebuchet that launches ping-pong balls up to 10 feet and may send 9-year-old engineers careening around the house excited by what they built all by themselves.

Tinker Crate provides clear, fun instructions, the opportunity to build beyond the box, and an engineering-focused project well suited for basic and intermediate understanding.

StemBox’s product, Magnets 101, was simple and straightforward, perfect for a 9-year-old looking for a quick scientific fix. The tools inside and easy-to-understand directions provided four distinct experiments centered on the use of magnets.

Whether dumping iron oxide into a petri dish and using a magnet to make it dance, crushing up cereal and mixing it with water before extracting the iron, or creating an iron-filled slime, each experiment took about 10 to 15 minutes to pull off, all with fairly easy-to-handle tasks. Expect a bit of a mess with everything in this box, but as one tester put it: “The whole science behind it was cool.”

The makers of StemBox say their goal is to get girls interested in STEM, but the box didn’t really contain anything girl-focused — maybe the purple gloves? — or any items a boy would even notice as being for a girl. That said, Kina McAllister started the company after working at the Fred Hutchinson Cancer Research Center in Seattle and noticing the lopsided ratio of men to women in her field.

Although the Magnets 101 StemBox isn’t highly complicated, it provides hands-on science experiments that really tick the “S” mark in STEM. Expect more of the same with a subscription — the products focus on chemistry but also explore electrical engineering, computer programming, math, and biology, with a multiplicity of hands-on experiments in each box.

It was certainly no simple task dealing with the Mood Lamp from Creation Crate. But that probably wasn’t why you signed up for a STEM box with a focus on the “T” in STEM. With wires, LED lights, circuit boards, and more, creators pieced together the right wiring system before then taking their experiment to the next level.

Building the hardware was just part of the process. The Mood Lamp task — designed to use the lights to create a colorful fixture — then required creators to download a coding app, code the lamp, and connect the computer to the hardware to make it work. After about 45 minutes of work, the creator leading the charge struggled to get the code to work, even after downloading the correct code directly from the site. Then again, this was a first-ever attempt at coding.

The instructions in the Creation Crate box weren’t highly detailed, prompting creators to seek more explanation online — a common theme for those making coding their interest. Although the “advanced” nature of the box was difficult for the young creators not in tune with technology, they all agreed it would prove ideal for someone interested in that world. Anyone looking to code or get a tech-specific look into STEM will be drawn to this Creation Crate style of experiment.

Designed as part of a 12-month curriculum, each lesson builds upon the last and grows harder, ideal for a challenge. The Mood Lamp kicks off creations that include LED dice, weather stations, and more. The company says that once creators complete all 12 boxes, they will have had more hands-on programming experience than 99 percent of current college-level computer science students.

The “It’s Electric!” box came with a pair of experiments, one geared toward understanding the project and another geared toward creating something fun out of it.

Before the creator got going, a few little electricity tricks got her excited about the project and provided a bit of magic right out of the box. The first part of the project, which took the creator about an hour to complete, involved laying down resistors, copper tape, and more to connect a battery to LED lights. Along the way, the creator learned about electricity through the information provided in the easy-to-follow instruction manual.

Once the first experiment was over, it didn’t take long to complete the next part of the project, which resulted in a sound-emitting buzzer. Connecting wires, batteries, and a simple contraption allowed the creator to install the device next to her bedroom door, so when anyone turned the knob, it sounded the alarm. “It was a lot of work,” said the 13-year-old, “but it is a pretty interesting experiment.” And it offered plenty of opportunity to show off the creation to anyone willing to turn the knob.

The instructions were clearly laid out and well designed. At the end is a Lab Notebook, which allows creators to learn more about that month’s topic by performing investigative experiments based on their own brainstorming. The goal of the extra section has them planning, testing, and redesigning their own creations.

The mix of projects from Groovy Lab in a Box options has students exploring everything from electricity and matter to weights, wind, water — and plenty more.