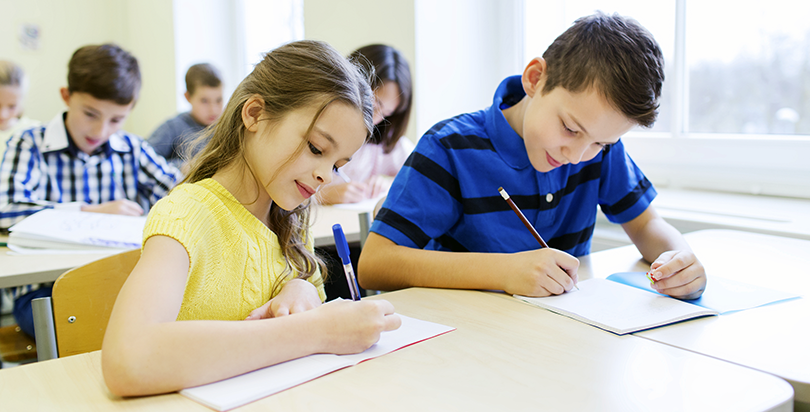 The national movement to boycott annual standardized tests seems to have stalled, according to survey results released Tuesday by the quarterly journal Education Next. The survey, which is conducted annually, examines a range of attitudes toward schools and education policy.
Here are four highlights of Tuesday’s release:
I. The Opt-Out Movement Nears A Ceiling
The widely publicized drive to boycott standardized tests in reading and math has attracted hundreds of thousands of parents protesting the use of test results for determining the effectiveness of students, teachers, and schools.
But the national sample polled by EdNext found that most of the country is not behind them.
Only 25 percent of the general public supports a parent’s right to decide whether their children will take state tests, while 60 percent oppose a parent’s right to decide and 15 percent are neutral. More remarkably, only 38 percent of parents said they are in favor of a parent’s right to opt out, while 49 percent are against it.
Opt-out advocates have waged aggressive campaigns in state legislatures, at school board meetings, and in their local school communities to expand the rights of parents in allowing children to skip the tests. Their protest even reached Congress, cited in debates among lawmakers in the rewriting of the No Child Left Behind Act. The new law, called the Every Student Succeeds Act, kept the annual testing requirement but gave states considerable freedom in determining how to respond to results.
A whopping 69 percent of people polled by EdNext said they support the federal government’s requirement that all students be tested in math and reading each year in grades 3-8 and once in high school — compared to 20 percent who said they opposed it and 11 percent who were neutral. Sixty-seven percent of African Americans support that requirement while 75 percent of Hispanics said they were in favor of it.
Teachers are considerably less supportive of testing, with only 50 percent saying they support the federal requirement, with 40 percent supporting a parent’s right to decide.
The EdNext poll was released just weeks after another report from Teachers College at Columbia University found that the typical opt-out activist is white, married, liberal, and more affluent than the rest of the country.
II. Common Core Support Continues to Decline
Last August, when six Republican presidential candidates spoke at length about education at a New Hampshire forum hosted by The 74 and The American Federation for Children, nearly all agreed, repeatedly, on one point: Common Core State Standards had to go.
Their disdain was unsurprising: support for the standards has plummeted in recent years, especially among Republicans.
Of the Republicans who had an opinion on Common Core, 82 percent supported the standards in 2013, but only 39 percent favored them in 2016. During that same time period, Democrats’ support for the Common Core dropped from 86 percent to 60 percent.
Those results may shed light on why some Republican governors have washed their hands of the standards after expressing enthusiasm for them initially. Last year, the once enthusiastic Common Core proponent Chris Christie, the governor of New Jersey, announced he was assembling a local team to develop New Jersey’s own standards because the Common Core was “simply not working.” (The state continued to administer Common Core-aligned exams, however).
Similarly, former Louisiana Governor Bobby Jindal determined the standards were so unacceptable that he sued the federal government, alleging it coerced states into adopting the Common Core. Jindal had previously been outspoken in his support and selected a state superintendent who strongly favored them.
(Read: Chris Christie Dances on Common Core, Tangles with Bush on Randi Weingarten, in NH Conversation)
In all, 50 percent of the general public supports the use of Common Core in their state, among those who had an opinion, down from 58 percent in 2015. Yet when asked the same question about standards but omitting the words “Common Core,” two-thirds said they are in favor of their state using them. This pattern occurred in past years as well.
III. People Like Their Teachers
Determining whether teachers are effective is a hot-button issue among lawmakers and education insiders. But what do parents think?
EdNext found both the public and parents believe teachers are performing well. Parents were asked to rate local teachers as excellent, good, satisfactory, or unsatisfactory. On average, 32 percent of teachers were rated as excellent, 32 percent as good, 22 percent as satisfactory and 13 percent as unsatisfactory. Teachers who responded to the survey assessed their colleagues similarly to parents, rating 34 percent as excellent, 35 percent as good, 21 percent at satisfactory, and 10 percent as unsatisfactory.
EdNext pointed out that while parents are happy with their local teachers they nevertheless identify a larger percentage of teachers performing poorly than states do. In a study released earlier this year, Brown University professor Matthew Kraft and Vanderbilt researcher Alison Gilmour found that of 19 states that revamped teacher evaluation systems, just three rated more than one percent of their teachers as ineffective or unsatisfactory.
IV. People Underestimate The Cost of Education (by a lot)
Most Americans vastly underestimate how much it costs to runs their local schools. When asked to guess the average amount their local district spends on a student’s education, respondents said $7,020. The average was closer to $12,369. Among those who didn’t know the per-pupil spending level in their districts, 61 percent said the government should spend more on schools, while 34 percent said it should stay the same, and 5 percent said it should decrease. Once they were informed of actual spending levels, the percentage of people who thought the government should spend more dropped to 45 percent, while another 45 percent say it should stay the same and 10 percent say it should decrease.
Submit a Letter to the Editor
August 23, 2016