Parents at Work: Has EdNavigator Fixed School Engagement by Making It a Job Benefit? 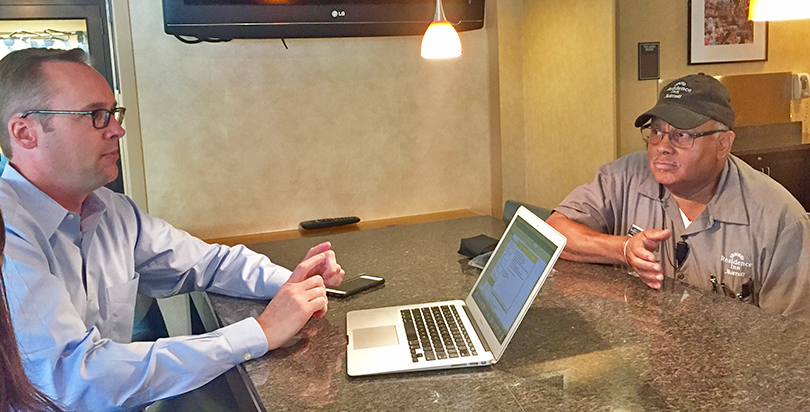 See more coverage of School Choice Week 2017
New Orleans, La.
Jovon Melrose sent the text message on a recent Friday: “Milton out for three days again. I’ll call you when I get off.”
Melrose, a housekeeper at the New Orleans Marriott, was sharing the bad news that her 14-year-old son had been suspended, once more, for cutting class.
Milton was diagnosed with bipolar disorder and schizophrenia and struggled to adjust to high school. For most of the fall, he worked with other children with disabilities in a self-contained classroom, but it embarrassed him to be separated from the other students, so he stopped showing up — and the suspensions began.
Melrose was worried, and not just about her son’s academic status. She has no car, and, as a single parent, she can’t afford to take more time off work to pick him up if he’s suspended again. Which means the young man would be forced to walk home alone through the Lower Ninth Ward, one of the most crime-ridden neighborhoods in one of the most dangerous cities in the country.
Melrose needed help with her son; she needed help keeping him safe. She needed help handling the school.
That’s why she texted Rameisha Johnson, her adviser for all things involving Milton and his education.
During the past seven months, the women have texted or emailed daily and met every couple of weeks to catch up on Milton’s academics and emotional well-being and to set his near- and long-term school goals.
Johnson is an employee benefit, a human one. The New Orleans Marriott is one of 11 hotels in the city (eight of them Marriotts) that recently began offering one-on-one school guidance and mentoring to employees as an option, like dental care or an IRA, in their job benefits package. Employees who sign up are matched with EdNavigator, a new nonprofit that aims to provide lower-income parents with the extensive school engagement that is usually a perquisite of the affluent. 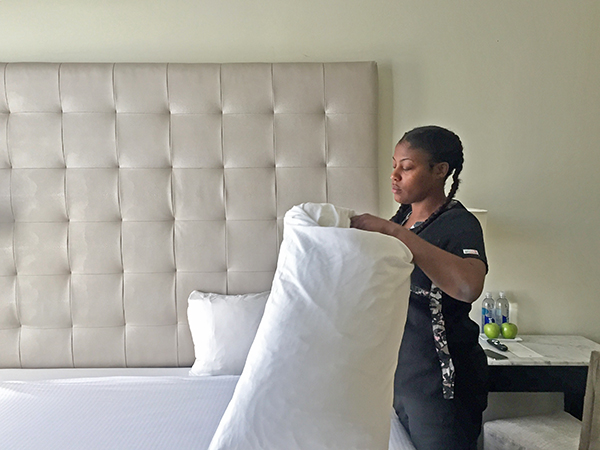 Irion Cloud, a housekeeper at International House Hotel in New Orleans, is working with EdNavigator to get help for her school-age daughters.

Photo: Mareesa Nicosia
Working with employers, the group is able to provide advisers for school-related problems and decisions at parents’ jobs and homes. In this way, they are flipping traditional models of family involvement, which, by requiring them to come to school, often disadvantage the parents who may need help most: single parents who can’t miss work and others who don’t know where they should go or whom to talk to or how to advocate effectively.
More specifically, the 50 workers who have already been using the new benefit for months — mostly black and Hispanic, often single parents and most without a college degree — typically seek help decoding jargon-filled instruction forms and mailings, selecting schools and traversing the bog of special education. The advisers — called Navigators — are former educators and administrators with years of experience negotiating dysfunctional school bureaucracies that feel impenetrable to many parents. (EdNavigator recently signed several new partners, including Tulane University, which expands its offerings to an additional 620 workers.)
In Melrose’s case, Johnson, a past school counselor and supervisor, is used for many functions: She “translates” the edspeak in school communiqués, helps deal with a recalcitrant teacher, chased down Milton’s missing suspension records, arranged a re-evaluation after school officials suggested he was illiterate, and dashed to the school in the middle of the day when he had an emotional meltdown.
Perhaps most important to Melrose, Johnson provides a clear accounting of the services Milton is entitled to as part of his Individualized Education Program.
Johnson’s immersive relationship with the family has helped the boy progress, Melrose believes, albeit slowly and despite difficulties. “My child came from zero to something,” she said in an interview.
She also suggested that without Johnson she may not have been able to hang on to her job at the Marriott, where she’s worked for four years cleaning rooms and training other housekeepers.
“When I say it’s a blessing, it’s a blessing,” Melrose said. “And it helps me too, to be a better parent.”
The sell
When EdNavigator first approached New Orleans hotels with its unusual proposal for melding commerce with education activism, many were initially skeptical. Eventually, they came around to the idea that helping to facilitate employees’ involvement in their children’s schools could add up to big savings in the high-turnover hospitality industry — nationally, 72 percent of hospitality industry and restaurant employees did not stay in their jobs in 2015, up five percentage points from 2014.
The value of advisers like Johnson, the hotel executives wagered, would keep employees from moving on to other jobs as quickly and reduce missed shifts.
“Turnover happens to be a big issue in our industry, and if we can concentrate on fixing some of the things outside of work that might be nuisances to folks, it’ll allow them to be at work, be more productive and [have] less time lost,” said Keith Schmitt, the director of human resources at the New Orleans Marriott.
“The investments that we make in systemic change need to be balanced with investments in supports for families … there has been way too much imbalance.” —Tim Daly, EdNavigator co-founder
Schmitt acknowledged that his hotel, along with four other Marriott properties in New Orleans, was wary even as it signed up 20 employees for the program last spring for a beta test of sorts. Buoyed by the early positive results reported by managers — employees are said to be more focused, and there are fewer late arrivals — Marriott executives plan to expand the number of families in 2017.
“I don’t think it’s naive to believe that we can hopefully have a small impact on the overall educational process here,” Schmitt said. “I think what we’re doing here, I see [its impact]. If EdNavigator can then expand and all of a sudden you’ve got 1,500, 2,000, 5,000 families being serviced in this community … I think certainly that will have a total impact on the whole educational environment in the city of New Orleans.” 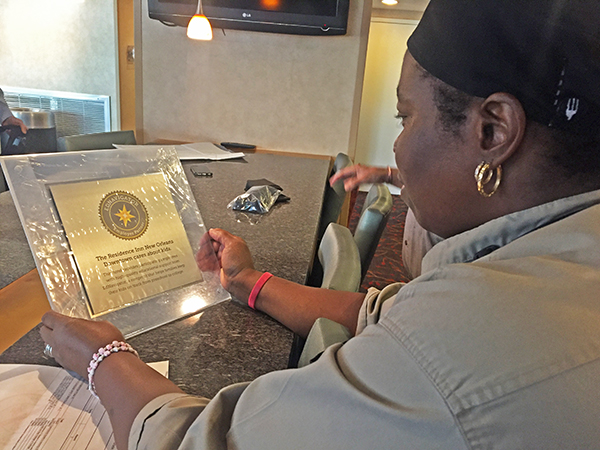 Greta Harrell, a cook at the Residence Inn in New Orleans, admires a participation plaque from EdNavigator. The organization works with businesses to provide school-related mentoring and support for employees and their children.

Photo: Mareesa Nicosia
Setting sail
EdNavigator was launched in the summer of 2015 by three former top executives of The New Teacher Project (known today as TNTP), a teacher-training and advocacy organization that became one of the important outposts of education reform.
(The 74: Inside the New TNTP Research: Is Teacher Training Just An Expensive Waste of Time?)
Over time, Tim Daly, TNTP’s former president; Ariela Rozman, its CEO; and communications chief David Keeling came to believe that large-scale educational change needed to include making schools easier for parents to use.
That perspective was almost entirely absent from reform efforts, said Daly.
“The investments that we make in systemic change need to be balanced with investments in supports for families, and I think there has been way too much imbalance,” he said.
Daly argues that policy has been overly focused on accountability, teacher evaluation and testing, displacing the more immediate needs of parents. New resources, like more granular educational data, are often inaccessible to parents, he said.
“I think that we would like the idea that ‘You get help with education’ to be a universal. That anyone who wants it can get it,” he said, likening it to the expectation that if you show up injured at an emergency room, you’ll receive medical care. “The question is how to deliver that.”
He and his colleagues believed that school needed to be brought to parents, rather than the reverse, and they began working on a plan that would enable businesses to incentivize high-quality parent engagement in ways schools and advocacy groups weren’t able to.
Advisers and stakeholders in both education and business resisted the concept, Daly said.
“We had lots of people just kind of straight up tell us, like, [employers are] never gonna pay for this,” he said.
As it turned out, though, employers in New Orleans’s hospitality sector — a major driver of the city’s $7 billion tourism industry — needed ideas for slowing the churn created by a 60 percent (and trending upward) turnover rate. 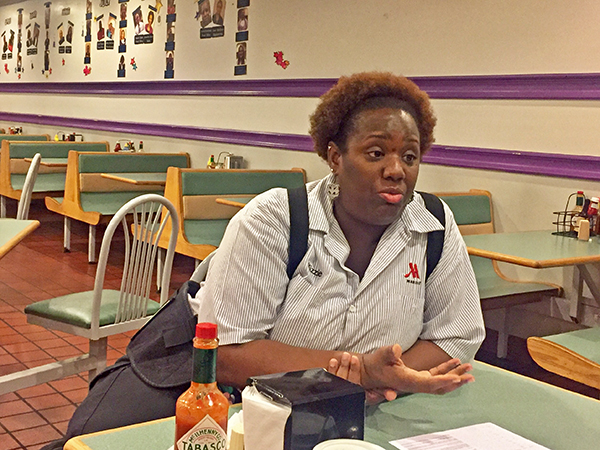 Kizzie Youngblood, a hotel employee in New Orleans, is working with EdNavigator to learn how to help her son get better grades.

Daly and his colleagues hope to reach thousands of families in the New Orleans metro area by persuading other large local employers to offer their service. While it still relies on grant funding, EdNavigator estimates that contracts with businesses will cover an increasingly bigger percentage of its operating costs.

To that end, it recently finalized an agreement to work with 345 employees at Tulane University and is negotiating a deal with Ochsner Medical Center, one of New Orleans’s largest employers. In addition, the group is exploring opportunities with construction businesses and hospitality outfitting and supply companies. Smaller partnerships are also possible with the city’s cultural institutions, such as Preservation Hall.
In the future, EdNavigator may consider expanding into Boston, Washington, D.C., Las Vegas, Atlanta or Nashville — all cities with large charter school sectors as well as magnet and specialty school options within the traditional public school system.
See more coverage of School Choice Week 2017.
Disclosure: The 74 and EdNavigator both receive funding from the Bill & Melinda Gates Foundation, Bloomberg Philanthropies, the Carnegie Corporation of New York and the Walton Family Foundation.
Submit a Letter to the Editor
January 24, 2017