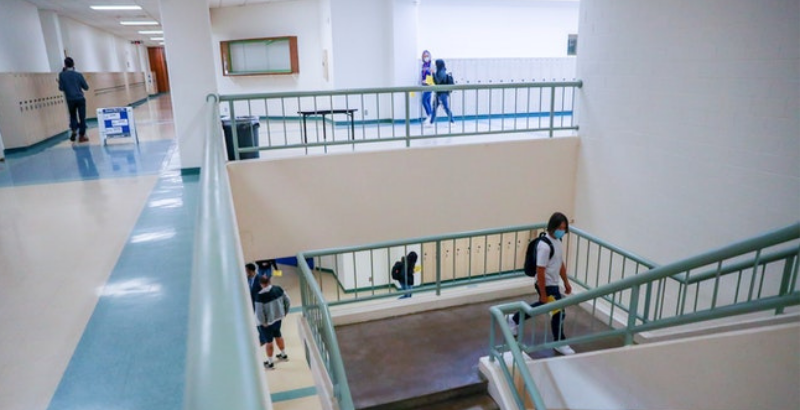 Freshmen head to classes at McKay High School April 2021. Schools in Oregon have access to more than a billion in pandemic aid, yet less than 8% of it has been awarded. (Amanda Loman/Salem Reporter via Oregon Capital Chronicle)

In some Oregon school districts, turf fields and lawn mowers were necessities to overcome the pandemic and get schools reopened.

Since March 2020, Oregon has been allocated $1.7 billion in emergency relief funding from the federal government to get students back in classrooms, and to get them caught up on their education after school closures.

Now, more than a year later, most of that money remains unspent.

School districts so far have been reimbursed for about $222 million in emergency relief projects, according to the Oregon Education Department. That means just under 8% of all dollars have made it back to districts.

The bulk of that money has gone to staff, technology and capital projects – getting kids laptops and wifi, upgrading ventilation systems and adding more classrooms to encourage social distancing.

Districts must spend at least $201 million of Oregon’s latest relief money to combat learning loss over the next three years, but data from the Education Department show that less than 1% has been distributed so far for that purpose.

The reasons behind what districts are buying, and when, are complex, but they have broad latitude in using the extra money.

The Elementary and Secondary School Emergency Relief Fund was signed into federal law in ​​March 2020 as school buildings in many states were closing and classes shifted online.

The first round of money was ready to go out to states immediately for buying personal protective equipment for staff and students who had to remain in school buildings, and to help schools pay for the transition to online learning. That included laptops for students, new online teaching software, network security upgrades and internet hotspots for families that otherwise had no internet access.

The money was awarded from the federal government to the state Education Department, which reimburses districts for their purchases. Purchases over $5,000 must have prior approval from the department.

Oregon’s share of funds in that first round was $121 million.

Most of the state’s 216 school and education service districts have claimed some portion of the funds and to date, more than $100 million of that first round funding has been spent.

The second and third rounds of funding came in December 2020 and March 2021. Oregon was allocated $499 million in the second round to spend on getting schools ready to reopen.

In the third round, the state was allocated $1.1 billion.

It was additional money for school reopening that came with a new federal mandate – school districts had to spend at least 20% on combating learning losses. Schools have until 2024 to spend the latest round of money.

Little to learning loss so far

Of the $1.1 billion available to Oregon districts in the third round, about $18 million has been distributed so far, according to the state Education Department. That has gone to paying for summer school programs, salaries, payroll costs, retirement costs and technology and supplies.

Districts are allowed to use the relief funds to pay for new teachers, and boost pay for current employees for taking on additional work during the pandemic and to retain them.

Of the $202 million set aside to help students catch up on their education, about $1.4 million – less than .05% – has been distributed so far, according to the Education Department.

Cynthia Stinson is senior manager of federal investments and pandemic renewal at the state Education Department. She said timing is the issue with the relatively slow payout for extra learning programs.

She said most schools haven’t had to draw on the emergency funds yet to pay for tutoring, counseling, afterschool and remediation programs. Many only just recently submitted budgets to meet an October deadline set by the federal government, and some are taking a long-range approach with the money, having been given three years to spend it.

In an email, Marc Siegel, communications director at the Education Department wrote, “It is important to note that the three relief acts came in very short succession.”

Siegel said many districts are still spending previous rounds of money and added, “We are only a little over three months into the school year.”

But Oregon schools have not wasted much time getting capital projects funded, some of which include renovating running tracks, getting weight training equipment and upgrading playgrounds.

Stinson said districts have been given flexibility on what they can buy.

The Education Department doesn’t track every rejection of a district’s requested spending, but said it turned down requests for baseball and football scoreboards, some requests for bleachers, the request for a vehicle to use for student outreach and one request for a roof replacement.

“One of the goals is also to emerge stronger post pandemic,” Stinson said of the emergency funds. “As we talk with districts, and understand what it might really mean for a rural or frontier district in Oregon to redo a playground, it’s not only for all of the kids in school, but it’s the only playground in the community, right?”

The Capital Chronicle emailed 150 Oregon school district superintendents seeking information about how they used their latest round of relief dollars. Of those, 30 superintendents or district representatives responded.

Three wrote that they had been posting reports on their district websites about where their relief dollars were going, six sent spreadsheets detailing projects and a few said they hadn’t claimed any of the latest funding but planned to.

“We have some older buildings with poor ventilation. Supplies, materials and equipment would be next on the list,” he wrote via email.

Clark said the district is using dollars from the state’s Student Investment Account to help recover lost learning. That’s part of the $1 billion a year Oregon schools get under the Student Success Act that was signed into law in 2019. Several district superintendents said they preferred using that more stable funding instead of short-term federal help to pay for more staff and for programming to combat learning loss.

In Hermiston, Superintendent Tricia Mooney said the district wants to use the latest round of relief money to support summer school programs to help get students caught up.

Among most of the district leaders who responded, transitions to online learning, staff, payroll and retirement, along with capital expenses and supplies were among the biggest expenses incurred so far.

In an effort to get schools fully reopened in the fall, the Klamath County School District initiated construction projects with the emergency funds.

The district updated HVAC systems in an elementary school and high school, and added extra classrooms to buildings so there’d be fewer kids in each room. They also added new turf fields to several schools and resurfaced a parking lot.

Despite being short staffed, like most districts in the state, Superintendent Glen Szymoniak said the short window to use federal relief aid meant he wasn’t going to use it to do temporary hires of teachers and counselors and programs that couldn’t be sustained.

“With money that only lasts a couple years, you do projects. That’s the golden rule right there. You don’t use it to hire people and cut them loose in a few years. It gives you a bad reputation and it’s just a terrible way to treat people,” he said.

Rather than hiring new people, he used some of the relief money to pay employees to surrender vacation time.

“We’re buying that off at a bit of a higher rate,” he said, “so that we can have them stay in the classroom.”

He also bought lawn mowers and floor cleaners that were faster and more efficient than what he had, allowing grounds staff and janitors more time to complete other sanitation and maintenance work and negating the need to do more hiring.

“Custodians have floor scrubbers, now there’s time to sanitize. They weren’t sanitizing like this before,” he said. “Principals with tight budgets would buy cheap mowers. Well then, none of the other work gets done. With a high capacity mower [custodians] have more time to do other stuff.”

He said investments like the turf fields and running tracks were important for sustaining school programs that students needed during the pandemic.

“The first turf I applied for was for Chiloquin,” Szymoniak said of the elementary school in his district. Because of drought and the resulting water restrictions, “If there’s not enough runoff and the lake level is a certain height they shut off the irrigation for farmers, ranchers and for us. In Chiloquin, our playgrounds turn to dust,” he said.

The turf became an essential place for students to play, have for recess and for extracurricular activities.

Szymoniak said he’s committed to investing more than required into activities that combat learning loss. He said his district is already spending and will continue to spend upwards of 38% of the district’s relief dollars on learning loss. So far, the district has set up after-school tutoring and drama programs, paid for buses to get kids to and from after-school programs and provided teacher training for paraprofessionals who might consider becoming teachers in the district.

For long-term expenses, including staffing and offering more social and emotional support programs, he is using the state-funded Student Investment Account.

“Schools are institutions just like a university. You can’t run a university with a whole lot one year and barely enough the other. They run best when there is stable, consistent funding,” he said.

Accountability for the millions

Jennifer Patterson, an assistant superintendent at the Education Department, said agency officials will continue to talk with school district superintendents about how to make the most of the money.

“We would want to be in conversation with districts to say, what are you noticing about this investment? Is it yielding outcomes that you can see? And to help people do what educators do best, which is to notice a need and be responsive to shifting their investment and strategy if they’re not seeing the kinds of outcomes that they predicted.”

The department itself gets to set aside 10% of all the relief dollars, or roughly $165 million, for emergencies, combating learning losses, helping charter schools, the Oregon School for the Deaf and juvenile corrections programs.

So far the department plans to spend $56 million to combat learning losses.

“The arc of the money is long and we’ve talked about going slow to go fast,” Patterson said. “In the sense of, you know, this money doesn’t have to be spent until September 30, 2024. So, really taking a longer view of the investment over time, that will maximize meeting the strengths and needs of local communities and students.”