Optimism for No Child Left Behind Rewrite As Ryan Takes House Gavel, Calls for Cooperation 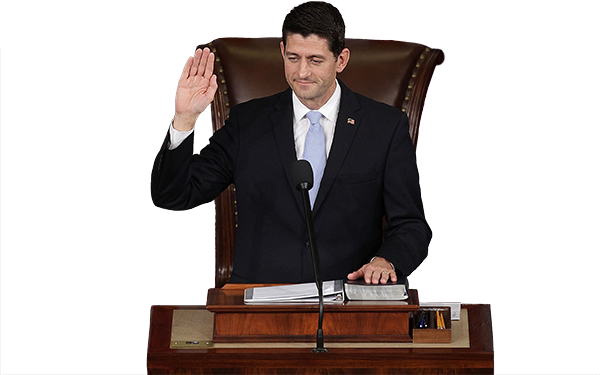 Newly minted House Speaker Paul Ryan kicked off his term Thursday calling for a fresh era of cooperation, one education advocates hope will help pave the way for a No Child Left Behind rewrite.
“Let’s be frank: the House is broken. We’re not solving problems, we’re adding to them,” said Ryan, who won the backing of all but 10 House Republicans, a rare sign of unity in a caucus not known for cooperation in recent years. “We are not settling scores. We are wiping the slate clean.”
To be sure, the thorny issues left to negotiate in the NCLB rewrite — including preschool, school choice, and accountability standards — are no fewer than before Ryan’s election. But a change in leadership, both simply because there’s a new face leading the chamber and because of Ryan’s specific attributes, is a source of optimism for some education advocates looking for a revamp of the long-expired law.
Much like a newly-elected president gets a honeymoon period in which Congress is more cooperative, so may Ryan with the otherwise unruly members of his caucus, said Tamara Hiler, policy adviser for education at the think tank Third Way.
The thinking and actions of the Republican caucus’ most conservative members is always unpredictable, but taking the source of much of their anger — former speaker John Boehner — out of the picture could help pacify them to accept a deal. Boehner, who helped author the original bill in 2001, was tied in particular to No Child Left Behind.
“A lot of the angst that happened in the past is…a lot of animosity toward John Boehner in general and not necessarily the substance of a lot of policies that were coming through,” Hiler said.
Ryan voted for the original law in 2001, but in the years since has moved toward the wing of the party more skeptical of federal involvement in schools. This summer, for instance, he voted for what’s often called the “A-PLUS Act” that would send all education funding to the states as block grants with no federal directives. That amendment wasn’t added to the bill, but Ryan voted for final passage.
Although any new face would provide a break from Boehner, Ryan also has bipartisan bona fides to help ease the path to a deal. He worked with Patty Murray, now the top Senate Democrat on the education committee, to arrive at a budget deal in 2013.
“They have a deep relationship. I have a feeling that he would want to continue that reputation and work with her and not be the one standing in the way,” Hiler said.
Ryan in his speech vowed to return the work of writing legislation to committees, and presented an olive branch to Democrats, pledging to include them in the legislative process.
“A neglected minority will gum up the works. A respected minority will work in good faith,” he added.
The overall path for the bill is further smoothed by a new two-year budget deal that eliminates the need to spend mental energy, political capital, and floor time on perennially contentious spending and debt issues.
And in the end, the key driver of the No Child rewrite deal in the House won’t be Ryan, much like it wasn’t Boehner. The man at the helm, as ever, is John Kline, chairman of the Education and the Workforce Committee.
“I still think he has a ton of motivation to get this done and sort of seal his legacy,” Hiler said of Kline.
Submit a Letter to the Editor
October 29, 2015