Opinion: Primary Politics, “Local Control” and a Swift Sprint Away from Standards at the GOP Education Summit 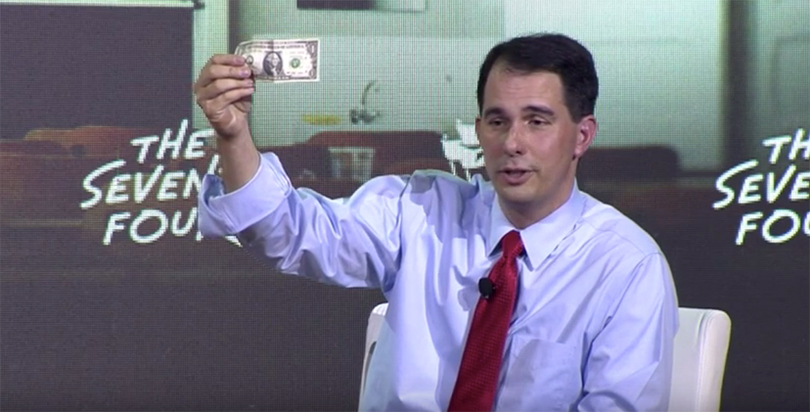 “Where would you rather spend this dollar?
“Would you rather send it to Washington where they skim money off the top, spend it in a bureaucracy just kitty corner from the United States capital in the Department of Education … or would you rather just keep it in your home state so it can be spent on your kid’s school?”

Wisconsin Governor Scott Walker put the dollar back in his pocket but the shutters on the cameras at the front of the stage kept clicking, fast and loud like a gaggle of crickets. Walker was deftly doubling down on an idea that had dominated the 2015 New Hampshire Education Summit — a day-long education gathering hosted by The Seventy Four and sponsored by the American Federation for Children that was held Wednesday outside Manchester, New Hampshire — where six Republican policymakers came to give in-depth summaries of their K-12 education positions.

You’d have to be under a rock not to know, but to sum up the day’s declaration in six words: Local control is the best control. (Watch the full NH Education Summit: Jeb Bush, Chris Christie, Carly Fiorina, Bobby Jindal, John Kasich and Scott Walker talk K-12 with Campbell Brown)

Each political party has their own whipping boy proxy that best embodies this notion (and you can see it among the Democrats in what Randi Weingarten calls the “test and punish” dogma of standards and assessments) but at Wednesday’s GOP summit it was about Common Core — which has become shorthand for national standards, the U.S. Department of Education as an agent of oppressive regulation and coercion, and a bunch of other things. Common Core is a rare instance of seeming agreement among the hard left and the hard right … they both hate it (even if for different reasons).

Governors Bush and Kasich remain supportive of the concept if not the name while the other attendees — with varying levels of efficacy — are walking away from them like the hero in a Michael Bay movie just after the big explosion.

Personally, I’m far from George Will on the role of the federal government (or government broadly) where regulation and implementation are concerned, but I am highly skeptical of centralized bureaucracies. Carly Fiorina — who spent more time talking about the nature of regulation and innovation than education — might have summed up my feelings best when she noted that innovation is about “risk taking and mistake making” and that when you “give a bureaucracy an inch it takes a mile.”

But I am absolutely NOT sold on this reasoning that “local control” is a panacea for the ills of Washington’s overregulation. And it shocks me, given some of the examples we’ve seen, that the candidates would sell it that way.

Consider what you might describe as the radical localism of a place like Newark, New Jersey, where local control (the state has run Newark for over 20 years and pays the lion’s share of the school budgets) is “the” community issue. Things are tense enough there that it was common to see drawings of former superintendent Cami Anderson drenched in blood with the word “Liar” scrawled across her face hanging in the window of the CWA office downtown. Governor Christie’s picture, more recently, was seen hanging in the window next to Anderson’s receiving the same treatment. Is giving this sort of local establishment more power really the way to go?

And then there’s Missouri, where the triggering of a state-law transfer provision catalyzed by the Normandy school district’s (which is almost entirely black) loss of its accreditation unleashed what I will kindly describe as “the worse angels” of the folks in nearby Francis Howell (which is mostly white). Local control, taxation, property wealth concerns, community cohesion, and safety were offered as the primary reasons to oppose the transfer of students from Normandy. But when people start talking about “knives, guns, metal detectors, and test score drops” you don’t need to be a Navajo code talker to understand what they really mean: those poor black kids will ruin “our” public schools. It’s all very David Simon-esque.

And let’s not forget that “local control,” which is to say traditional school board governance where the teachers unions have an outsized ability to put their own folks in charge, is precisely what we’ve been trying to get away from as “reformers.” To add some more nuance, I think lots of folks on Team Change like local control when it’s “parent control” in the form of more school choice (which all the candidates support). But school board elections in particular—which the former head of The Fordham Institute Checker Finn once described as “deeply corrupting of the democratic process”—created the highly uneven system of public education we’re all trying to improve. Given the history here, and the tense relationships with teachers unions that many of the candidates (Walker, Christie, and Bush in particular) have experienced, the cry of “onward” for local control seems like running backwards, or to borrow from Governor Christie, like “arming the palace guard” instead of empowering the revolutionaries.

Common Core has its issues (as a proxy and as a policy on its own) but I’m not sold on the wholesale notion of forcing the federal government out of education and exclusively empowering the locals. And that’s not even because I don’t think competition among states, or states as “laboratories for innovation” are bad things … and it’s absolutely not because I think the federal government is a perfect implementer.
It’s because, given the history of No Child Left Behind and its important legacy of shining the spotlight on student failure which states routinely covered up in the absence of any federal push, I think local “accountability” in an era of no federal intervention is flatly “no accountability.” The Civil Rights groups get this specifically, because the states, in the absence of Washington calling for some rational transparency and, if not describing, at least mandating that there should be sanctions for failure (though even this seems to be a bridge too far) aren’t going to do these things wholesale. Sure, Governor Bush had a breakthrough education policy agenda that has shown great gains for the kids who needed them the most, but for every strong-willed, tough, committed wonk like Bush there’s someone who thinks letting parents know their schools aren’t up to snuff is morally and civically untenable. Without the federal role and, indeed, some level of federal command, we’ve got nothing on this.

Running for office is more about what you say than what you’ll do. And, yes, primary voters of all stripes are a prickly bunch (I happen to be one waiting to chime in on the other side of the aisle). But this chatter — brilliantly cloaked in the language of local sovereignty — is … unsettling, and it troubles me deeply to hear the positive aspects of the federal role dismissed so cavalierly. Maybe the candidates know better and are just posturing. I certainly hope so.

Fans of Game of Thrones will recognize the themes behind this debate. In one exceptional scene of the HBO series, scheming Petyr Baelish summarizes his worldview, claiming “knowledge is power.” But Cersei Lannister, a royal who is woefully detached from her citizens, but who controls the money and the soldiers, sees it a whole lot differently: “POWER is power.”

But in the case of education, aren’t both of these sentiments true? Don’t we need to both empower families and leaders at the local level AND have a federal government that acts as an honest broker, ensuring there’s some semblance of consistency across districts and states?

And more urgently: Can a candidate who actually gets this nuance survive the Republican primary melee?