One Way to Boost Student Success: Get Serious About Sex Education — and Teach the IUD 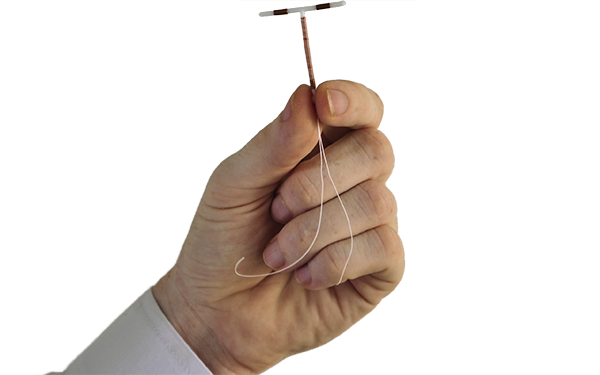 With much fanfare, President Obama signed the Every Student Succeeds Act into law last month, enshrining in federal policy the objective of college and career readiness for all young Americans. Soon states will get to work designing new accountability systems that seek to find well-rounded approaches to measuring school quality — ones with a continued focus on academic achievement, but that include other factors, like social and emotional or “non-cognitive” skills, too.
But if we’re serious about students succeeding in college and/or a career, there’s another topic that needs attention which nobody is talking about — one of the major impediments to postsecondary completion and upward mobility. Namely: Early, unplanned, unwed pregnancy.
It’s not hard to understand why this is such a critical issue. It’s tough enough to gain the academic and related skills to be ready for a four-year college, or for high-quality technical training. That’s doubly true for children growing up in poverty, starting as they do so far behind their more advantaged peers. Layer a baby on top of that, and the odds start to look insurmountable. You try finishing school, or starting a career, while caring for an infant or a toddler, and working a low-wage job, all by yourself. It’s no surprise, then, that only 40 percent of teen mothers finish high school, and fewer than 2 percent finish college by age 30.
You would think, then, that schools would do all they could to encourage their students to delay parenthood until they had finished their education and secured a foothold in the workplace. And to be fair, the teenage pregnancy rate has dropped by more than half since its high in 1990, so schools deserve credit for doing a lot. (Especially adopting evidence-based pregnancy prevention programs.)
But are they doing everything they can? In particular, are they shouting from the rooftops about one of the most promising, game-changing, society-improving technological marvels to be developed since sliced bread? I’m referring, of course, to the IUD. (It’s at this point that my staff begs me to stop. “Mike, nobody wants to hear a middle-aged man, much less a Republican, talk about birth control.” I understand, but I disagree. It’s just too damn important.)
Yes, the IUD. Why am I so enamored? Take a look at this graphic about the failure rates of various forms of birth control, courtesy of Isabel Sawhill of the Brookings Institution. (Or view the version from the New York Times.)
IUDs Are Much More Effective than Other Forms of Birth Control 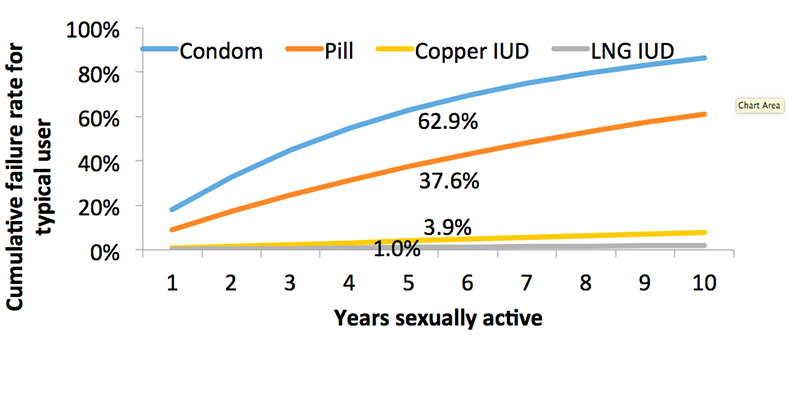 Data are from Trussell (2011). The probability that a woman doesn't get pregnant at all over a given period of time is equal to the success rate of her contraceptive method raised to the power of the number of years she is using that method.  We then subtract this multi-year "success rate" from 100% to get the failure rate (graphed above). This assumes that there is an equal chance of not getting pregnant in every year of condom use and that successful users and failed users (where success is not getting pregnant during a year using birth control) have the same rate. The assumption is reasonable given that figures we use are the figure for a “typical” user of some type of contraceptive.
The take-away is clear: Sexually active teens or adults are playing Russian roulette if they are using condoms alone, or even birth control pills, as their sole birth control method. Unintentional failure rates are simply too high for these approaches to be reliable. The fact is that many teens and young adults make mistakes — forgetting to take the pill, failing to use a condom (guys!) — or get pressured into trying for a baby, or are ambivalent about it.
As Sawhill argues, IUDs change the default. Once women choose to get one, they can last for up to ten years, and they must return to their doctors to have them removed. That allows for a very conscious, deliberate decision to have a baby — one hopes after the woman and her partner have finished their education, started good jobs, and secured the financial resources to bring a new life into the world.
Imagine if every sexually active young woman chose to use an IUD or another “long acting reversible contraceptive” like an implant. Imagine if our teenage pregnancy rate plummeted to near zero. Imagine if nobody had their education or early career trajectory interrupted by an unintentional pregnancy. This is possible — And it’s a big, big deal.
Back to the schools. Are they making sure young women (and young men) know about the comparative success rates of various forms of birth control? Are they helping teenagers understand the life-changing potential of the IUD?
Thanks to a brand-new report from the Centers for Disease Control, we can answer that question with some precision. Officials surveyed a representative sample of high school health teachers in almost every state, and asked them, among other questions, if they taught their students about several major kinds of birth control. (See Table 13.) Here are the percentages who said yes regarding IUDs.

It will surprise no one that the deep blue coastal states are the most likely to teach high school students about IUDs, and that deep red Southern, Midwestern, and Mountain states are the least likely. That surely reflects the squeamishness of conservative parents, who don’t want public schools wading into these sensitive topics, or if they do, want them to promote abstinence. On the flip side, though, is the simple truth that preventing pregnancies is one of the most effective ways of dramatically reducing abortions. That should be something that red and blue America alike can rally around.

Back to the chart. What it tells me is that there’s a helluva lot of kids out there who aren’t being taught about a tool that could do as much as reading and math skills to help them succeed in college and career.
Of course, just telling teenagers about IUDs at school isn’t going to be enough. They also need to hear about it from their doctors, who need to be trained on the current research. A serious social marketing campaign would help too. And while Obamacare requires insurers to cover the device (which are expensive at $1,000 a pop), they aren’t going to be able to get one without their parents finding out. No small thing.
As a first step, though, educators should tell them about it. We already make them take the ACT or SAT, and fill out college aid forms. Why not make them look at Sawhill’s chart, too, and contemplate what it means for their lives, and the lives of their not-yet-conceived children? (Maybe we should also show the chart to their parents.)
You want student success? Empower young people to get an education before they become moms and dads. Teach the IUD.