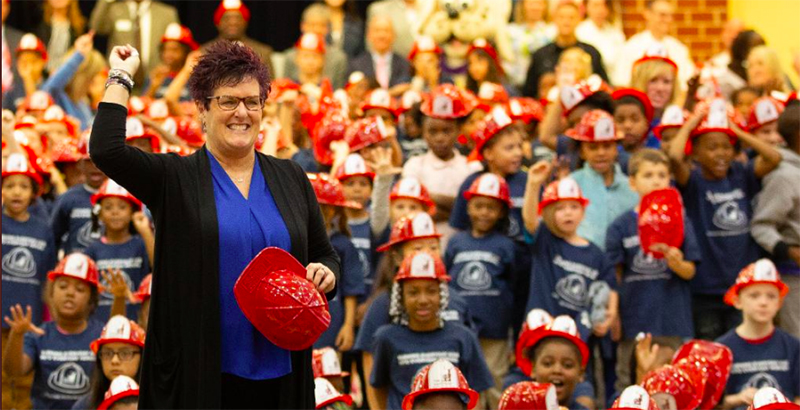 Barb Fisher has been teaching elementary school in Ohio for 12 years, so she knows a good lesson when she sees one.

Still, until this year, she had never delivered a lesson that literally saved a child’s life.

First-grader Zhiouli Wilson, 6, became trapped in a basement during a fire in her family’s Akron home in May. If not for Fisher, the little girl might never have made it out.

“We had just done our fire safety not two weeks before that, so it was all so fresh in her mind,” Fisher told News5Cleveland. “The firefighter that rescued her said that she saved herself by what she had learned, what we had taught.”

As flames raged and smoke billowed around her, Zhiouli remembered to stay low to the ground and cover herself with a blanket. It is what she had just been taught in the Junior Fire Marshal program, which was developed by The Hartford insurance company 72 years ago and has been taught in schools to 111 million kids nationwide.

This month, firefighters from the Akron Fire Department and executives from The Hartford came to Seiberling Community Learning Center to honor Fisher and Zhiouli.

“We are here to see a very special teacher,” AnnMarie LaBreck, spokeswoman for The Hartford, said, according to the Akron Beacon Journal.

But Fisher said it’s Zhiouli who deserves the accolades.

“She is the bravest person I know,” Fisher told the paper.

The girl has recovered from serious injuries and returned to school, where she frequently gets hugs from her teacher.

She missed class the day of the award ceremony, but the assembly included a fire-safety lesson for the rest of the school, complete with red plastic helmets and a simulated blaze.

For fire safety week, The Hartford recognized an Akron, Ohio first grade teacher who taught fire safety lessons to her students, helping to save a six-year old from a home fire one week later. pic.twitter.com/UNExiI9fPs

“It was the teachable moment,” Fisher told the Beacon Journal. “It kept the attention of 28 first-graders for two hours.”