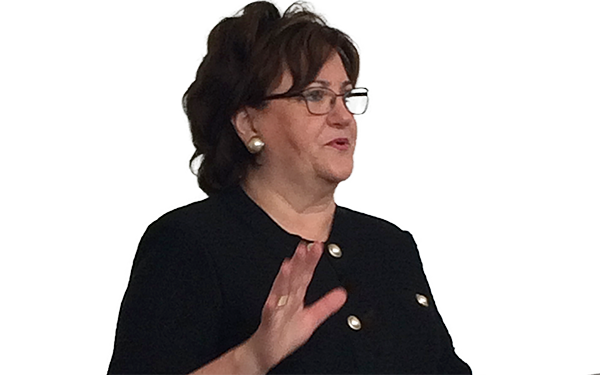 Corrected Sept. 9
ANALYSIS
“In collaboration with the district — and we really hope that that whole approach works — we want the district to be cognizant of some of the things that they can do to address some of these concerns.”

The three-person team, led by former New York City schools chancellor Dennis Walcott, is just beginning to make its presence known in the deeply dysfunctional school system. Elia and Walcott were interviewed by NY1 host Errol Louis last month about the difficult task ahead for the oversight team reviewing every facet of the district — from financing to facilities to classroom effectiveness — and getting answers when something is amiss.

“We expect that anything that is in question is going to be addressed (by the board),” Elia said.

The East Ramapo school board is controlled by white, ultra-Orthodox and Hasidic men elected by an insular and fast-growing religious community that sends its children to private schools, mostly yeshivas. Some 24,000 children in East Ramapo are enrolled in  private school while roughly 8,500 mostly poor black and Hispanic students, many from immigrant families and speaking limited English, populate the public schools.

“Collaboration” sounds like a perfectly fine goal but it has no teeth. If the issues that Elia is talking about —  particularly equitable distribution of funding between these two often-warring constituencies—  aren’t addressed by the board, then what?

If Elia and Walcott have an answer to that end game question just a few weeks into what’s expected to be a four-month process, they aren’t spelling it out.

The two have sat down for several interviews, and spoken at length about how they plan to bring change to the Rockland County district whose unique demographics and racial and religious tensions have attracted national attention. Walcott is expected to maintain a day-to-day presence in the district and report back to the state Education Department and the Board of Regents with a set of recommendations for improvement. But he doesn’t have authority to enforce the recommendations, as the public school community has demanded and the East Ramapo board has opposed.

Walcott, in an Aug. 20  interview on WNYC’s “The Brian Lehrer Show,” did hint at a potential game changer for the divided district —  allowing all parents of public school students to vote in school board elections, regardless of their citizenship status.

The controversial measure has been explored in some regions that are home to large immigrant populations, including Washington, D.C. Voting rights for immigrant parents of New York City public school students were in effect until 2002, when Bloomberg was given mayoral control of the schools.

If East Ramapo public school parents came out in force at the polls, the rationale goes, they could potentially offset the voting bloc power of the Orthodox community and elect their own representatives to the board.

“I believe in full participation of those who are public school parents and we’ll see how we can get to a point where we’ll be making a report to the commissioner that includes a variety of recommendations and listening to a variety of different constituencies,” Walcott told Lehrer.

Another trump card New York officials could use if the East Ramapo board does not follow through on the recommendations is to actually lean on the state’s existing authority under education law to remove local school board members for “willful neglect of duty” or for violating a direct command from the education commissioner.

That’s probably unlikely, based on the cautious and cagey path forward the state has taken thus far in addressing East Ramapo through years of negative audits, a clear failure to follow education law on special education and bilingual instruction programs, parent-driven lawsuits and the critical findings of a previous state monitor, Hank Greenberg, a former federal prosecutor appointed by the state Board of Regents to study the district last June.

The board has shown in recent months it is open to making some changes at the behest of education officials, finally firing attorneys who were paid upwards of $2 million per year and who bullied parents and students; and sitting for state-mandated training in diversity and open meetings laws. Walcott says he is in near-daily contact with school board President Yehuda Weissmandl.

Walcott’s appointment, along with Monica George-Fields, an expert in teaching and learning and school turnaround, and John W. Sipple of Cornell University, who has a background in education policy and finance, follows the New York state Legislature’s failure this spring to reach consensus on an oversight bill for the district.

The measure would have installed a longer-term state monitor — with veto power over the board — similar to what the heavily Orthodox Lakewood, New Jersey school district has in place. The bill, written and sponsored by Rockland legislators who represent East Ramapo, was the realization of Greenberg’s recommendations. Public school parents and students advocated for it while many in the Orthodox community fought it, arguing it amounted to an unfair trampling of local control.

Walcott is essentially Greenberg 2.0, and he’s shown he’s determined to take a more hands-on, public approach to his work in East Ramapo, a contrast to the strategic behind-the-scenes investigation Greenberg conducted.

So far Walcott has attended a school board meeting, met with residents at local businesses, gone to a church service, toured school buildings and talked with education advocates. He expects to make more appearances —  announced and unannounced — throughout the district and the school community. The team’s work will include visits to private schools to see that their instruction meets state requirements.

“This is the natural next step from (Greenberg’s) report,” Walcott said of his committee’s work, in the interview with Lehrer.

He went a bit further a week ago, promising in an interview with the editorial board of The Journal News in Westchester, New York, (in which George-Fields also participated) that “our goal is for action to take place long term and short term. We will not accept anything else."

Meanwhile, parents backed by the Education Law Center, a public interest law firm, announced their intention to review the monitors’ progress and sue the New York state Education Department if there’s no action within “the coming weeks.”

East Ramapo’s public school students are being denied the “sound basic education” they’re entitled to and it is the state’s obligation to intervene, attorneys for the parents wrote in an Aug. 31 letter to Elia and Board of Regents Chancellor Merryl Tisch.

If there’s one thing Walcott and his team should keep in mind as they wade into this morass, it is his predecessor’s main conclusion, outlined in a pivotal November 2014 report: The problem in East Ramapo is primarily one of political power and representation.

The school board has favored the interests of the 24,000 private school students over those of the 8,500 public school students when allocating limited resources, Greenberg said. Disastrous financial management coupled with the Orthodox community’s intolerance for even minor property tax increases has yielded annual deficits.

Some in the Orthodox community have applauded Walcott’s appointment and expressed hope that the team will now see what the board and its supporters have claimed for years — that a lack of state funding is solely to blame for East Ramapo’s problems, not favoritism toward the private school community that overwhelmingly decides which and how many of its representatives will sit on the board.

While state and local officials, following Greenberg’s lead, have agreed that additional aid is an important piece of a potential solution, they’ve made clear that they’ll assess the district’s financial stewardship before writing any checks.

The team will use Greenberg’s report as a “roadmap for us to review current spending patterns and exactly what is happening with the state aid that is going into East Ramapo,” Elia told Lehrer in the same interview.

The team will not shy from probing specific items highlighted in Greenberg’s report — particularly transportation and special education. Walcott also told Lehrer he’ll “advocate” to the board to restore some of the 400-plus staff positions that have been eliminated in recent years.

So far, the school board has refused to budge on transportation and special education —  two big-ticket items critical to the religious community that drive the budget up year after year. The district is legally required to provide both transportation and some special education services to private school students, and East Ramapo has increased those budget lines millions of dollars a year while cutting public school programs.

One thing Walcott and his team are expected to analyze is the district’s long-time offering of “universal busing” —  basically door-to-door transportation — for all students, public and private, no matter how close they live to their school. The state only requires districts to bus students who live outside a certain distance. A change to a less expansive system requires a public vote.

As the Orthodox population has exploded, spending for transportation (including for gender-segregated buses as per the religious custom) grew more than $5 million from 2009 to 2014, and special education tuition costs rose 33 percent from 2010 to 2014, Greenberg found. Meanwhile, hundreds of public school teachers and support staff were eliminated during the same period.

“What’s happened in the past, there certainly were decisions that were made that might not have been productive and that I would question how they got done quite that way,” Elia acknowledged on “Inside City Hall.”

She was responding to questions about what Greenberg found to be deliberate diversions of money to the private schools and the school board’s fraudulent sale of a public school building to a yeshiva despite the district’s growing public school enrollment. But she could have been referring to any number of decisions over the last decade or so.

Officials may rightly believe that these kind of uber-diplomatic talking points are necessary to navigate the highly charged political and cultural landscape of a school district that is unlike any other in New York.

But their remarks, in substance and tone, may turn out to be a grave understatement of the intractable reality that Greenberg summed up so poignantly in a meeting in Albany nine months ago with reporters (including this one), Tisch and then-Education Commissioner John King.

“Policymakers have lots of different ideas to pick and chose from. This much seems absolutely clear and essential to me: Whatever final model the Legislature and the governor are to adopt in this case, it has to be one that in real time allows someone the ability to reverse bad decisions of the board. That is to my mind necessary to begin to restore trust in a public school community that clearly has none in this board.”

Submit a Letter to the Editor
September 7, 2015