The number of home schools in North Carolina soared by nearly 20% from 2019 to 2020. But new data shows a 10% decrease last school year

By Dean Drescher
August 20, 2022
From EducationNC

The total number of home schools in North Carolina fell during the 2021-22 school year, according to new data released by the state Department of Administration. The decrease — about 10% from the prior school year — may not come as a surprise given pandemic-related changes.

In 2020, as the pandemic hit and many schools closed, a surge in interest in home schooling crashed the state’s website for families to register. That surge was reflected in the data: The number of home schools in North Carolina increased by nearly 20% from 2019-20 to 2020-21.

But that doesn’t appear to have stuck around. The data, released in July, indicates that North Carolina had 11,710 fewer home schools during the 2021-22 school year than in 2020-21.

Some counties have seen substantial increases since 2017:

North Carolina’s counties have substantial variation in their number of home schools and changes over time. Wake County currently has the most home schools with 9,002, while Tyrrell County has 32.

In the 2021-22 data, certain counties saw especially large declines from the 2020-21 school year — Pitt, Swain, and Halifax had declines greater than 20%. Madison, Graham, Randolph, and Jones had declines of about 19%.

Only four counties — Cumberland, Tyrrell, Hertford and Rutherford — saw the number of home schools increase from 2020-21.

The graphic below shows percent changes in North Carolina home schools by county since 2017. 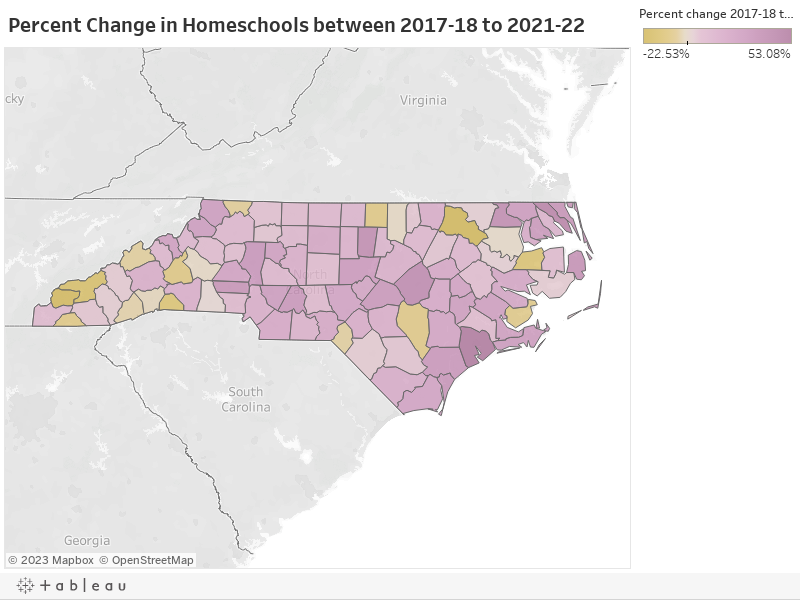