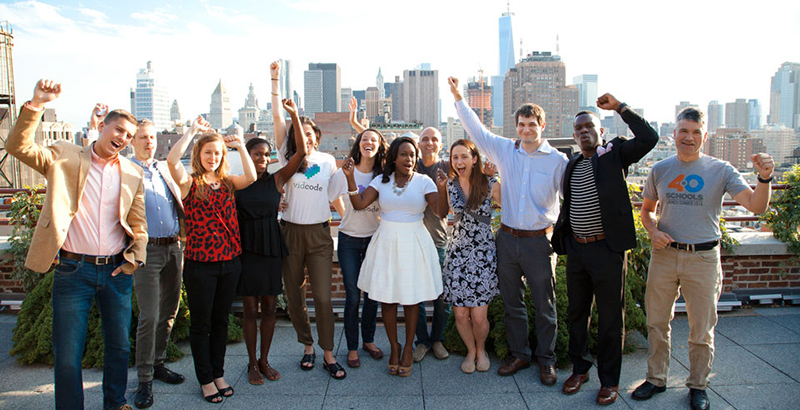 Jonathan Johnson has his work cut out for him. In a quiet room on the second floor of a synagogue in a historic New Orleans neighborhood, 16 ninth-graders are trying to master 3-D design software.

In addition to the high-tech challenges the class is meant to deliver, there are all the usual kerfuffles that accompany the use of devices in a classroom. A student ID is rejected as invalid. A profile won’t load. The YouTube playing on a neighbor’s screen goes from being a momentary distraction to a complete focus-killer.

Welcome to Rooted School, a 40-student startup that, on this Friday afternoon in August, had been in session three weeks. Johnson, the school’s founder, wants kids to turn first to one another for troubleshooting. But dutifully as the students try to comply, technology just comes with bugs. So Johnson is moving from one desk to another talking kids through things.

If Johnson is right, it also comes with some untapped potential for equalizing playing fields, both academic and financial. His goal is that four years from now, when these students become Rooted’s first graduating class, each will have a college acceptance letter in one hand and a high-paying, high-tech job offer in the other.

College is a great goal, he says. But so is interrupting the cycle of intergenerational poverty. New Orleans’s “Silicon Bayou” — a node of high-tech startups and entrepreneurs who sought an alternative to Silicon Valley’s mind-boggling cost of living — is in dire need of talent with cutting-edge skills. There’s no reason not to teach high school students the skills that will allow them to step into those jobs right away, Johnson believes, whether they go on to college or not.

As a 4.0 Schools fellow, Johnson spent three years testing and refining his idea in a variety of settings. Those pilots — including a stint as a program within Algiers Technology Academy, a NOLA charter high school  — and his past experience as a teacher in a high-poverty college prep setting revealed the same thing: To New Orleans’s mostly impoverished teens, a tech job at graduation seemed far more tangible and attainable than a four-year degree.

Many students in Rooted’s inaugural class participated in Johnson’s trials of the concept and were eager to enroll. Others were referred by a middle school teacher or principal who thought the tech focus — which is layered atop a full menu of high school classes — would be a good fit. As a group, they’re fidgety, but mostly on task.

Unlike in a conventional classroom, it’s not immediately apparent which Rooted students are high flyers and which are trying to catch up. Against a back wall, three boys are using basic computer-aided design (CAD) software to make superhero costumes. When they finish, the computer will unlock a more sophisticated program that creates models that will materialize in one of the 3-D printers at the front of the room.

To make their digital costumes, the students must drag and drop different geometric shapes, which they then have to scale, elongate and rotate to match the parts of the superhero suit they’ve already made. Forget joining limbs to torsos symmetrically, it’s devilishly painstaking work to make the parts proportional.

Elsewhere, students are constructing oversize paper clips that must be flexible and yet rigid enough to hold papers, and doing research for models of monuments that could be proposed to replace the Confederate statues that have been taken down in the city.

Xe’Tonyia Massey is reading the text of a speech given in May by Mayor Mitch Landrieu regarding the removal of Confederate monuments, including the statue of Gen. Pierre Gustave Toutant Beauregard, who championed the use of the Confederate flag.

“Earlier this week, as the cult of the lost-cause statue of P.G.T. Beauregard came down, world-renowned musician Terence Blanchard stood watch, his wife Robin and their two beautiful daughters at their side,” Landrieu said. “Terence went to a high school on the edge of City Park named after one of America’s greatest heroes and patriots, John F. Kennedy. But to get there he had to pass by this monument to a man who fought to deny him his humanity.”

Massey is researching historical figures whose images could replace Beauregard, and she hopes to get to the point where she can print a model of whatever she comes up with.

“What I heard is that if I went to this school, I would learn how to code,” she says. “I would have the ability to get a job.”

Johnson knows firsthand how much more tangible a job can be than college. He grew up in Orange County, California, in a family where people went to college but lived paycheck to paycheck. Because of this, generations of Johnsons enrolled in higher education programs close to home, so they could move back and forth as funds ebbed and flowed.

After college, he joined the alternative teacher training program Teach for America, which placed him in KIPP Central City Academy in New Orleans in 2012. Johnson said he was in the first half of his two-year commitment to the program when he met a 16-year-old named Ricky, who had made up four years of academic losses and was finally on track to graduate from first middle and then high school.

Ricky was selling drugs to support his family when he was murdered by another of Johnson’s eighth-grade students. At his funeral, Johnson says, the eulogist told the mourners Ricky was on track to win Louisiana’s scholarship for students who met the academic threshold for college readiness, known as TOPS.

It shook Johnson to his core. “I felt by working in this model I was creating a problem,” he says. “After 25 years of charter schools and reform, we know we can get kids like me into college. What if we could get them into the workforce sooner?

“What if we did school differently? What if we had schools that beat the streets?”

Easier said than done. Aware that with some students coming into high school with third-grade reading and math skills and just four years to close those gaps and confer, essentially, a tech degree, Johnson has built an environment in the school’s rented space that reminds students intelligence is not fixed.

While most high-performing schools have college pennants and the images and words of accomplished people of color on the walls, Rooted has reminders that audacious goals are met by meeting small targets. Just as in his own efforts to pilot and refine the school’s concept, unsuccessful efforts always yield feedback, Johnson said.

“You shouldn’t try that because you’re not _______ enough,” says one poster. Author Seth Godin’s self-empowerment book What to Do When It’s Your Turn (And It’s Always Your Turn),” with its message about the importance of claiming opportunity, is a bible.

There’s some clowning and fronting, but the Rooted students are mesmerized by the technology. “They know their school doesn’t look like what their friends’ schools look like,” says Johnson. “I am very stern with them about not taking these things for granted.”

On the right end of the row of boys in the back, Yaz Bonilla, a slender Latino, works quickly and methodically, almost as if against a clock. He’s far ahead of the rest of the class, so far ahead a staff member informs him he’s earned free time for the rest of the afternoon if he wants it. The boy shrugs and keeps working. He keeps butting up against a command he can’t execute. When he gets Johnson’s attention, the issue turns out to be some English tech vocabulary he didn’t understand.

To his immediate left is his constitutional opposite, Ronald Ally, a slight African-American teen who swivels in his chair in search of help at every mouse click, not even attempting a step without asking for help. Several minutes into the class he has yet to get a single shape into his design field, but he’s worn out his neighbors. Finally, he Googles the word “pelvis,” misspelling it, and then letting out a cry of relief when he finds a picture of the butterfly-shaped bones.

To his left is a young man who is constant motion, Steven Calloway. His right-hand screen pulsates with a rap video, his left contains a costume design that evolves in five-second bursts. At first blush, he appears to be the student least likely to finish the assignment. But suddenly there it is: His superhero suit, complete with a cape that required geometry to rotate.

At the end of the school day, the students head downstairs to the lounge to wait for their buses. The poster on the wall in this room is both blunt and inspiring: “It would take 228 years to close the [black-white] wealth gap,” it reads. “We think we could do it in our lifetime.”

This may seem too big a goal for a tiny startup, but Johnson sees no acceptable alternative.

“These kids just don’t have 15 years to make a living wage,” he says. “I know this viscerally.”