When Zainab Salami’s parents sent her from a public school in Texas to the Randolph-Macon Academy, a 124-year-old military school in western Virginia, her only frame of reference was a Disney Channel movie.

“I thought it would be like Cadet Kelly,” she said. In the 2002 film, the main character, a free-spirited artist type played by Hilary Duff, enrolls at the fictional George Washington Military Academy and doesn’t fit in with the tough, disciplined culture.

When Salami, now a senior, returned home for her first break, friends from her old school brought her presents and asked if she was OK, as if she had taken ill.

But at Randolph-Macon, no one has shouted in Salami’s face. She hasn’t had to crawl through mud or scale walls to complete an obstacle course.

Instead, her experience has been shaped primarily by extracurricular activities, which she said was the primary reason she left public school for military school. She is a member of Cadets in Action, a fundraising group; she also plays in the school’s praise band and performs in theater productions. Randolph-Macon’s 2015 production of Godspell was so good, Salami said, that students performed it at a conference in Portland, Ore., alongside college productions. This fall, she’s in the cast of Cinderella.

Like Randolph-Macon, most of today’s military schools are a far cry from the harsh, regimented institutions Republican presidential candidate Donald Trump has described on the campaign trail.

Trump, who avoided the Vietnam War draft through educational and medical deferments, has said that the time he spent as a teenager at the New York Military Academy, a private boarding school where his parents sent him because of disciplinary problems, was the equivalent of military service.

At NYMA, he got “more training militarily than a lot of the guys that go into the military,” the candidate told the Washington Post in January.

Not your father’s military school
But military schools today are working hard to refute the old stereotypes that cast them primarily as institutions of last resort for troubled teens or pipelines that funnel students directly into the armed forces. Rather, both long-established private military academies and newer military charter schools focus on college preparation, informed by traditional character values such as integrity, diligence, respect and the desire to serve.

“Everything that they learn in these schools, the purpose is to push them to college. These are college prep programs that use a military education model to maximize the impact on the young men and women,” said Ray Rottman, president of the Association of Military Colleges and Schools of the United States and a retired Air Force colonel.

Nationally, the association has 41 members, serving the entire range of grades, from pre-K through college. Together, they educate about 9,000 K-12 students, Rottman said.

At Randolph-Macon, students wear uniforms and take Air Force Junior ROTC classes. The school owns two airplanes, housed at a nearby regional airport, and students can graduate with a pilot’s license. There’s a competitive drill team, and the school day begins with a military-style flag ceremony. At homecoming, officials hold a memorial ceremony for alumni who have died in service to the country.

But within this military framework, there is a strong focus on the arts and humanities. The school requires double English classes for all students through junior year and holds an annual poetry slam, among other arts offerings, said Celeste Brooks, director of public relations.

During a recent visit, teachers were seen to be far from the harsh disciplinarians barking orders portrayed in films. Math students were given extra time at the start of class to finish homework because a concert the night before had kept many kids from completing the assignment. In an AP government class, a senior spent more time looking through photos online than listening to that day’s lecture about federalism. The teacher, Brian Barbour, said that was fine — he treats the class like a college lecture, and students are free to decide how much effort to put in.

De-emphasizing discipline also means that military schools these days are vigilant about not accepting students who have displayed behavior problems, Rottman said. If behavior issues emerge later, “unfortunately, they have to be let go. One kid like that will take five or 10 kids with them in a downward spiral,” he said.

For most students, the military focus ends at graduation. At Randolph-Macon, some alumni attend the service academies or enroll in ROTC programs in college, but only around 10 percent, said the school president, David C. Wesley, a retired Air Force brigadier general.

Hallway bulletin boards display photos of recent graduates, along with the colleges they were accepted to and where they enrolled — places as varied as New York University, Penn State and local community colleges.

“Most [students] will never wear a military uniform again, but they will leave here with values that most people associate with the military,” Wesley said. “Service is universal for our kids, but it doesn’t have to be military service. It’s just service of others, being part of something larger than yourself.” 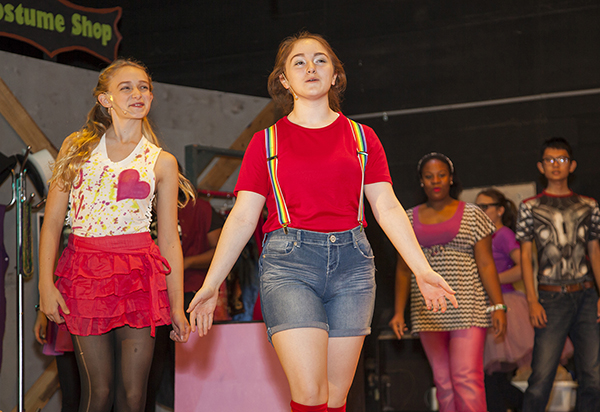 (Photo by Randolph-Macon Academy)
A tradition of service, changing with the times
Military schools have existed since the 1800s, before public education was broadly introduced across the country. Membership in the association, which was founded in 1914, has grown and ebbed over the years, from a high of about 60 to a low of 28, Rottman said. Economic conditions, the United States’ involvement in various wars, and societal perceptions of the military have long affected enrollment — that low point of 28 came after the Vietnam War, when the public view of the armed forces was more negative.

Randolph-Macon has followed a similar trajectory. Founded in 1892, it originally was an all-boys prep school that fed into Randolph-Macon College. It became a military institution about 25 years later, associated with the Army’s National Defense Cadet Corps.

Enrollment dipped in the early 1970s, and the trustees decided to begin admitting girls. They also switched military affiliation to the Air Force’s JROTC program, thinking an emphasis on aerospace could help recruitment in the post-Vietnam era.

Today, Randolph-Macon enrolls 305 students, 256 in high school and 49 in middle school. About a third are girls, and about a third are from overseas. (There are more students from China, for example, than from Maryland.)

Trump’s alma mater, the New York Military Academy, located in the town of Cornwall-on-Hudson, has had trouble more recently. The 126-year-old institution closed abruptly for a few weeks at the start of the past school year after the owners declared bankruptcy. The school, which is still listed as a member of the association, was eventually bought out by a nonprofit group of Chinese investors. 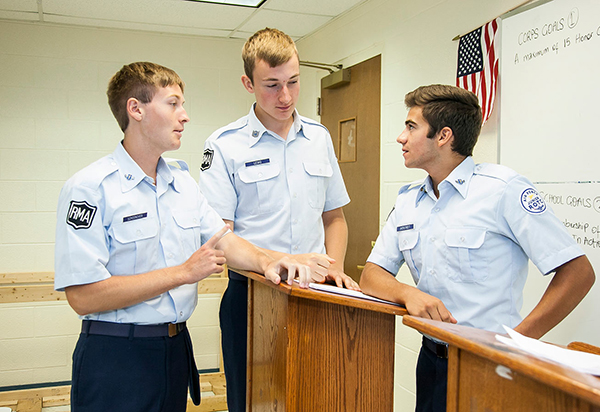 (Photo by Randolph-Macon Academy)
Military-Themed Charters Open Doors to More Students
While some traditional academies are struggling, charter schools have become a small but growing area of K-12 military education.

Tuition at private military schools can rival college costs. At Randolph-Macon, it’s $37,409 for high school boarding students from the U.S., more for international students. About 35 percent of students receive financial aid, and the average award is $8,500, staff said.

But because they are public schools, military-themed charter schools are tuition-free.

Mark Ryan, superintendent of the North Valley Military Institute in Sun Valley, Calif., near Los Angeles, called the military theme of his nonresidential charter school the “suit of armor” that guides his student body.

North Valley students are grouped in military units, wear uniforms and earn military commendations, but the real emphasis, as at the private schools, is on college prep, Ryan said.

“The belief is all of these skills … are going to transfer to college success,” he said.

In many ways, three-year-old North Valley would look “very, very similar” to any private military school, Ryan said. “The bigger difference is we are definitely serving a much more needy demographic.”

While most students go to private schools performing at or above grade level, most arrive at North Valley below where they should be, Ryan said. The vast majority, 88 percent, are eligible for free or reduced-price lunch, a common measure of student poverty. Ten percent are homeless, and 10 percent are in the foster care system, Ryan said. Twenty percent have special needs.

Rottman estimated there are 40 military-themed charter schools around the country, three of which are members of his association. One of the first was the Oakland Military Institute, started in 2001 by then-mayor Jerry Brown, who is now governor of California. Brown wanted to create a school that mirrored the type of education he received in Catholic school, with its college-prep focus and military affiliation.

Obviously, Brown couldn’t replicate a religious curriculum in a public setting, so instead he “chose the perfectly legal alternative of affiliating with the California National Guard, with its emphasis on ceremony, discipline, inspiration, and leadership training,” he wrote in the summer 2001 issue of Education Next.

Ryan, who worked at Oakland Military Institute for eight years, said Brown wanted to provide more choices to enable parents to educate their children as they saw fit.

“The reality is that Jerry’s vision was that this sort of option needed to be available for typical public school students who otherwise wouldn’t have had the opportunities you could have if you went to a $30,000-a-year private school,” Ryan said.