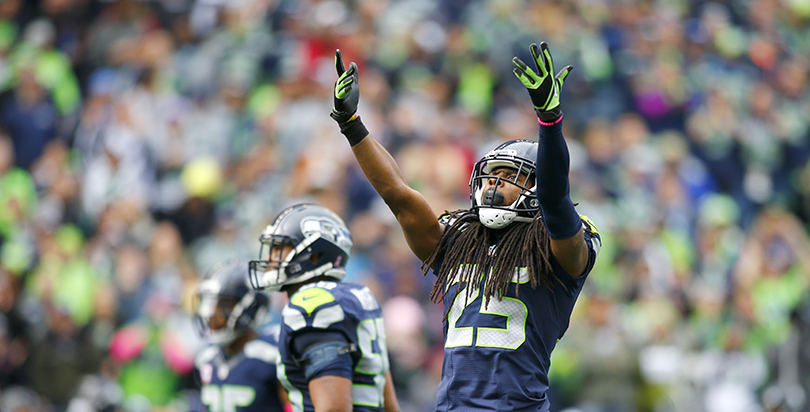 Incentives can be a powerful motivator, and NFL star Richard Sherman offered a Virginia high school student an incentive worth going after: a college scholarship.

The Seattle Seahawks defensive standout met Hershai James, then a junior at Varina High School, last year at a benefit dinner and football camp for the Excel 2 Excellence Foundation, run by Sherman’s teammate Michael Robinson. Robinson, a Varina High School graduate, started the foundation in 2010 to support students who might not otherwise get the attention or assistance they need.

#Seahawks CB Richard Sherman promised a Va. HS student if she made honor roll, he'd fund her scholarship. So he did https://t.co/dcfWpo47WK

Sherman and James got to talking, and he challenged her to bolster her grades. The student athlete was already holding down two jobs in addition to playing sports, but she couldn’t resist the challenge.

“When my senior year began, I definitely had the scholarship in my head as motivation,” James told the Richmond Times-Dispatch. “Being a senior, the year is really stressful. Having something to look forward to helped. It’s like saying my hard work and dedication had paid off.”

James raised her grades enough to make honor roll, and at this year’s benefit dinner she told Sherman she had held up her side of the bargain. Then, Sherman made good on his side of the deal, with the official news that he would pay for her to study business at Norfolk State University this coming fall.

James’s reaction to the news was one of shock, she told the paper, double-checking with Sherman that he was serious. “I just felt so blessed to have been given this wonderful opportunity,” she said.

Sherman, a Stanford University graduate, says knowledge is power and that he wants students to be as powerful as they can. “Nobody stops anybody from reading and educating themselves,” he told the newspaper. “Mike is only trying to empower these kids to be everything that they can be, and if we can help with that with our presence, our jerseys [autographed for an auction], with our words, we’ll do everything we can.”

Shot out to my #TeamExcel student Hershai James on doing a great job on @SportsCenter this morning! #E2E #TeamExcel #IMPACT ?? @RSherman_25 pic.twitter.com/NN1IOGbkHW

That “everything” was a powerful incentive for James, now an honor roll graduate of Varina High School.