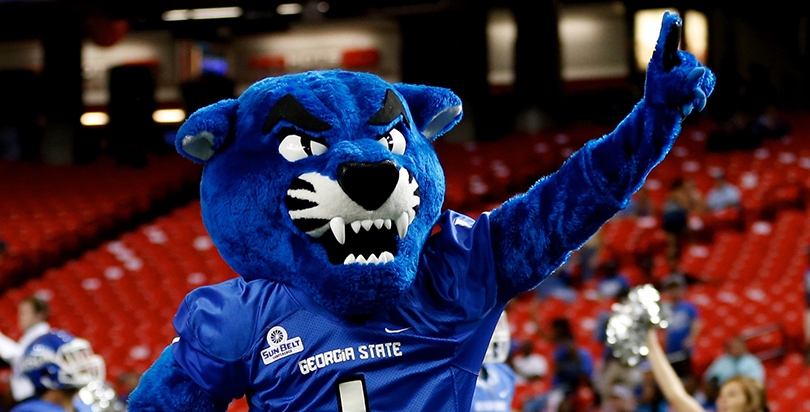 Researcher Lindsay Page knows a lot about summer melt, the phenomenon in which recent high school graduates back out on their plans to attend college. In fact, the University of Pittsburgh assistant professor literally wrote the book on it. So when she says a recent study she co-authored analyzing a new summer melt prevention program gave her chills, it’s significant.
The program is called Pounce, a text messaging service developed by Georgia State University and an ed tech communication company called AdmitHub. Named for the university’s panther mascot, Pounce sends text messages to encourage and guide freshmen-to-be through a maze of paperwork: filling out financial aid forms, signing up for housing, completing loan counseling.
Pounce also responds to students’ questions, from how to register for classes to whether salamanders are allowed in the dorms (no, only fish in tanks of less than 10 gallons).
VIDEO: Chatbots in Higher Education
Unlike automated email blasts, the text messages are personalized, drawing from university systems that track which steps students have yet to complete. If a student hasn’t registered for orientation, Pounce will send a reminder. If a FAFSA isn’t complete, Pounce will send a link with instructions.
Most important, the moment a student completes the financial aid form, Pounce sends a GIF of Tina Fey making it rain money.
“What is so exciting to me is that by integrating this smart tech with the real-time data from the university, you can really target students, and they will pay attention more because they will begin to learn that when outreach is coming from this system, it knows where they are. It’s relevant to their needs,” Page said.
Other summer melt programs she has studied send blanket messages to all students, who often tune them out because they’re not relevant, she said. For Page, this new research shows the power that universities have to address summer melt.
The study was also able to differentiate which steps in the college preparation process — immunization records, loan acceptance, orientation attendance — Pounce was able to help with, an area of research that had been a “black box,” Page said.

Note, a negative number on FAFSA verification means that the FAFSA was completed and did not require a staff member to verify. (Credit: AdmitHub)

She and co-researcher Hunter Gehlbach conducted a randomized control trial in which half of incoming freshmen had access to Pounce and the other half had access to Georgia State’s typical outreach programs, which can include emails, mailings, and phone calls. Over a four-month period, Pounce exchanged 200,000 messages with 3,100 students.

Students using Pounce had a 3.9 percent higher rate of enrollment than those using the university’s traditional outreach methods. Overall, the university’s summer melt rate dropped from 18 percent last year to 14 percent this year, after Pounce was introduced.
Nationally, 10 percent to 20 percent of college-bound students back out on their higher education plans, and those summer melt rates are higher for low-income students and those who are the first in their family to attend college, Page said. This is often because those students face complex paperwork, financial burdens, and limited adult support in the period between high school graduation and freshman orientation.
That’s why, she said, it was encouraging that the students most likely to text Pounce were first-generation students and those who qualified for federal grants.
This specific student population is one reason Georgia State wanted a summer melt intervention program. As GSU’s applicant pool grew larger and more racially and economically diverse over the years, its summer melt rate increased from 8 percent to 18 percent, said Scott Burke, assistant vice president of undergraduate admissions.
“We needed to do something different,” he said. “We had tried personalized approaches via email and phone calling … and nothing was moving the needle.” 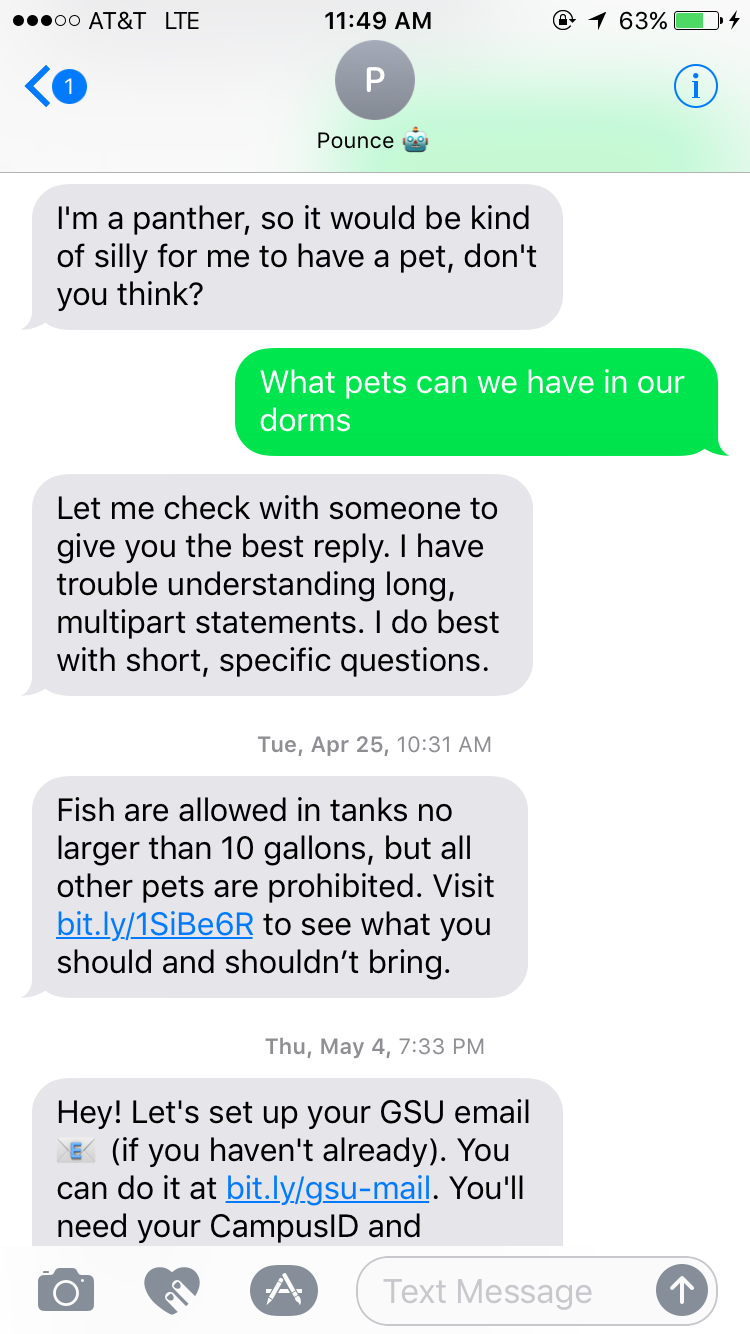 Photo: Paola Berrios
Of the 50,000 student messages Pounce received, only 0.9 percent needed to be addressed by a staff member — and Andrew Magliozzi, CEO of AdmitHub, said he hopes that ease of use can convince schools to reach out to students who aren’t following through on their college plans.
“Now, for the first time ever, you can scale personalized communication without your head exploding,” Magliozzi said. “Getting people to no longer think of this melt rate as the way things simply have to be, but to realize that there is a better way and to come up with a systemic solution together, is an exciting possibility.”
Based on student feedback, Pounce seems to have been received well: 80 percent of students gave it four out of five stars, and 94 percent recommended that incoming freshmen use it.
Paola Berrios just graduated from high school and plans to attend Georgia State in the fall. She and some friends have used Pounce and found the messages helpful. She said she feels more comfortable asking Pounce questions that she thinks an admissions counselor might view as trivial, and she likes the unsolicited advice Pounce provides as she slogs through financial aid paperwork.
“What I really like is it reaches out to you,” Berrios said. “A lot of kids aren’t eager to reach out; we expect things to come to us.”
The next challenge for Pounce is retention, Burke and Magliozzi said: The same students who find college preparation difficult encounter similar roadblocks when it comes to persisting in their studies through graduation. Only 11 percent of first-generation, low-income students earn a degree in six years, according to Pell Institute data.
But if Pounce’s success continues, Tina Fey will be making it rain college dreams for many more students.