More troubling news about the quality of online charter schools in Ohio: According to a study released today by the Fordham Institute, the state’s virtual charters – which have been progressively enrolling more students in recent years — have large negative effects on student test scores.
This new research from the conservative education think tank is the latest in a long line of negative studies and publicity for virtual charter schools — dire reports that have led even many school choice advocates to raise concerns about their effectiveness.
The Ohio study — conducted by New York University professor June Ahn — examines the state’s online charter sector, which as of 2013 enrolled 35,000 kids, or 2 percent of all public school students. It found that those enrolled at online charters were particularly likely to qualify as low-income, have lower starting test scores, and have been retained in the previous grade, suggesting that e-schools serve a more disadvantaged student population. 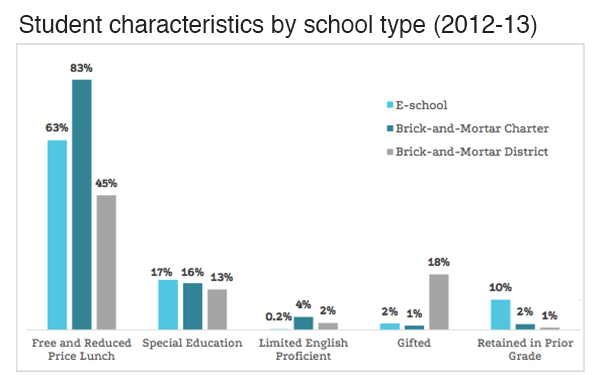 When students attend online charters, the study shows, their achievement drops markedly compared to similar students who attend brick-and-mortar schools. For instance, a middle or elementary school student starting at the 50th percentile of performance in math would, on average, fall to the 36th percentile after one year at a virtual school. For reading that student would drop to approximately the 45th percentile. Results of a similar negative magnitude were found in tenth grade.
The study’s foreword, penned by Dara Zeehandelaar and Michael J. Petrilli of the Fordham Institute, doesn’t mince words: “On average, Ohio’s e-school students are academically behind at the start of each school year, and they lose even more ground (relative to their peers) during the year spent at the e-school.”
The Fordham method is slightly different, but the results are quite similar, to a widely cited national study, which included Ohio, released last year showing negative effects for online charter schools.
The chief challenge in examining the impact of such schools is ensuring an apples-to-apples comparison. Maybe students who enroll in virtual charters are struggling in a way that statistical controls can’t account for. At least two recent studies, though, suggest this phenomenon can’t explain the negative results. These studies — one examining eighth graders in a virtual algebra class and another looking at college students — use distinct research methods, and both suggest that online learning is simply less effective than face-to-face instruction.
When confronted with negative research findings, online charters groups have generally argued that test scores are poor proxies of school performance, that the students they enroll are uniquely disadvantaged, and that the findings are outdated. The Center For Education Reform, a pro-school choice group, has criticized a focus on empirical evidence as a research “death march,” calling instead for trusting the decisions of families.
Marie Hanna — of Ohio Connections Academy, an online charter that accounts for about 8 percent of e-schools students studied in the report, according to Hanna — said the school had received high marks on the state report card. “Fordham’s paper uses a methodology that we believe does not accurately capture student performance nor show a complete picture of e-school performance,” she said.
Today’s report has both national and local implications. On a national level, the study will provide credence to efforts both within and outside the school choice movement to improve or even eliminate virtual charter schools. A group of three pro-charter groups has called for tighter regulations of e-charters, while also floating the possibility of removing virtual schools from the charter model altogether. A recent op-ed from a charter advocacy leader in New York praised the state’s ban on online charters, describing it as “a model which has been widely discredited as ineffective.”
Meanwhile, Ohio’s charter schools have faced significant scrutiny for their poor average performance and certain shady financial practices; a state law was passed last year to improve transparency and accountability in the sector (though there have already been some implementation challenges). Recently, one large online charter operator has fought efforts by the state to audit its attendance number; a state judge ruled for the state, but the school has continued to fight the audit.
The one silver lining for the state’s charters is that this study backs up the long-held view of some advocates: that e-schools have dragged down the performance of the sector as the whole. The study finds that brick-and-mortar charters slightly outperform district schools in grades four through eight. (The tenth grade results were mixed, with neither sector having a consistent advantage.)
But the virtual schools are not a trivial part of the charter sector: more than one third of students enrolled in Ohio charters attend a virtual school. In fact, compared to both brick-and-mortar district and charter schools, change in enrollment has risen much more quickly at online charters.

The study proposes a number of changes based on its findings: Ahn reiterates previous arguments that online charters should be more selective in enrolling students who are more likely to succeed in such an environment. Currently, though, this would be illegal — a form of “cream skimming” — and the suggestion has previously been met with fierce resistance from online charters themselves.
The report also suggests allowing Ohio students to more easily enroll in just one or two online courses, rather than an “all or nothing” approach, which currently exists in Ohio.
Notably, however, the report doesn’t argue for scrapping the model altogether. “The consistent, negative findings for full-time e-school students are troubling. One option is to pull the plug — literally and figuratively — but we think that would be a mistake,” write Zeehandelaar and Petrilli in the foreword. “Innovation is usually an iterative process.”
Ohio virtual schools have existed in some capacity since 2000, though. At what point does “innovation” become instead a state of perpetual failure? And how many “iterations” do online schools deserve to prove their effectiveness, particularly if the proposed reforms — which are challenging both politically and technically — are unsuccessful?
(Disclosure: The study was funded, in part, by the Walton Family Foundation, which is also a partial funder of The 74.)