New Study Ranks States on How Well They Help Homeless Students. Where Does Your State Rank? 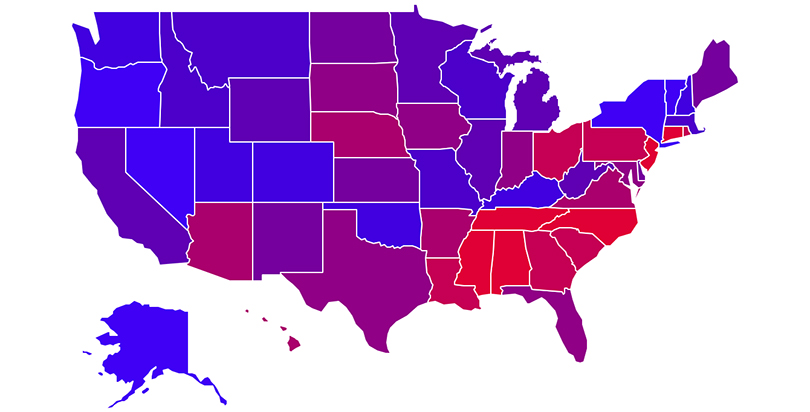 Homeless students have long been considered an invisible population in American education policy discussions, but the new federal education law puts a renewed emphasis on identifying and serving them. In recent years, some states have focused on success for displaced youth. However, huge disparities still exist across the country, according to a new report by the Institute for Children, Poverty and Homelessness.
“Out of the Shadows: A State-by-State Ranking of Accountability for Homeless Students” uses five student participation indicators to “hold states accountable” on their ability to support and identify displaced children. In the institute’s rankings, which include all 50 states and Washington, D.C., Oregon and New York top the list, while Tennessee and Mississippi rank at the bottom.
“We see better-ranked states kind of in the West, and we see this curious cluster of low-ranked states in the South,” said Josef Kannegaard, a senior policy analyst at the institute. Among states that ranked highest in their analysis, he said, several “have recently undertaken new initiatives aimed at bridging the gap across different government agencies and also working in closer collaboration with local educators as well as with the shelters and other community-based organizations.”
Here are the five indicators the nonprofit used to rank each state, with its explanation of why each measure is significant:
Based on these metrics, here’s a map showing how each state ranks. Included are state-by-state data on the Head Start and pre-K measures. Specific data for the three remaining indicators will be released in the coming weeks, Kannegaard said.
Roughly 1.3 million children attend K-12 schools in America. But that number nearly doubles when children of preschool age are included, said Ralph Nunez, the institute’s president and CEO.
“Homeless students miss school more often, repeat grades more often, and drop out more often than their housed peers,” Nunez said. “Unless we recognize and address their specific educational needs, many of today’s homeless students will become tomorrow’s homeless parents.”
The Every Student Succeeds Act, signed by then-President Barack Obama in 2015, requires schools to hire enough personnel to adequately educate homeless students, and states are required to allocate more federal money to serve their needs. For the first time, beginning next school year, the law will require states to report the graduation rates of homeless youth in the same way they do other vulnerable groups, such as the disabled and English language learners.
Kannegaard said the data presented in his report should serve as a “jumping-off point” to look more deeply at best practices that states have used to identify homeless students. Although current data allow researchers to analyze participation in education services among homeless youth, in the coming years they’ll be able to better analyze how students who are enrolled actually perform.
“It’s certainly very exciting, the type of numbers that are going to be coming out, particularly with regard to looking at more definitive outcomes like graduation or standardized test scores for homeless students,” Kannegaard said. “We won’t know more at least until the end of the school year, as more states adopt the now-mandated policies.”
Submit a Letter to the Editor
June 25, 2017