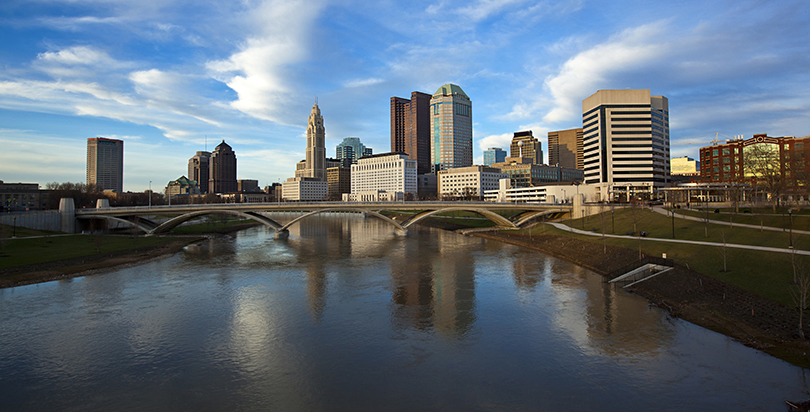 The study, authored by Deven Carlson and Stéphane Lavertu and published Tuesday by the Thomas B. Fordham Institute, examines Ohio’s policy that allows students who want an alternative to their home district to transfer to another public school district of their choice. (Families may opt for this route because they seek more rigorous or specialized academic programs, or to ensure their kids can attend school with friends; sometimes a school in a nearby district is actually closer than their assigned school, among other reasons.)

Following Minnesota, Ohio was the second state to enact a voluntary, interdistrict choice policy, in 1989. (Forty-four states now have some form of open enrollment.) Currently, more than 72,000 students in 80 percent of Ohio school districts use the program, according to the report.

Perhaps most significant, the authors found, are the 10 percent of districts statewide that don’t allow open enrollment. They include the affluent suburban districts that border Ohio’s largest cities, post some of the highest test scores in the state, and enroll far fewer minority students, 18 percent, compared with Ohio’s “Big 8” cities, including Cincinnati, Cleveland, and Columbus. The urban districts that get shut out enroll on average 63 percent black and Hispanic students and have long struggled with low academic achievement, according to the report.

“These ‘doughnut rings’ around the Big 8 effectively bar tens of thousands of low-income, minority students from the opportunity to attend school in higher-achieving districts,” write the Fordham Institute’s Chad L. Aldis, vice president for Ohio policy and advocacy and Aaron Churchill, Ohio research director, in a foreword to the report. “It may be, of course, that some of those districts have no room for more pupils; but we cannot avoid suspecting that a form of exclusion is also at work.” 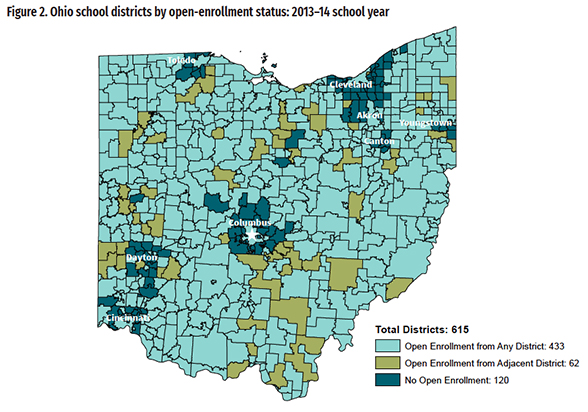 The report has been in progress for about two years and is based on district- and student-level data provided by the Ohio Department of Education, including individual anonymous records for every student who attended Ohio public schools between 2008–09 and 2013–14.

Among the other notable findings were:

“Through a transparent school accountability system — properly balanced between growth and proficiency measures — [policymakers] can nudge families towards quality schools or steer them away from less satisfactory ones,” Churchill and Aldis wrote in their introduction. “Regional or community organizations can help families navigate among their choices by hosting school exploration fairs, promoting school visits, or publishing clear, impartial information about the schools in their vicinity.”

In an interview, Churchill asserted that this approach could drive system-wide improvement and positively increase competition for students among rural and small-town school districts, which in some cases have struggled with dwindling enrollment and have limited or no alternatives to district schools.

“I think it does create an incentive for districts to focus on quality and focus on the service of education so that they are retaining families who live in their own district and possibly attracting families from outside their district,” Churchill said. “It’s not clear that students are making huge jumps in terms of achievement or any further outcomes I would like to see, but I think just having the opportunity out there for rural students and small-town students to attend a different district is definitely commendable.”

Another obstacle is transportation. In Ohio, families are effectively on the hook for transporting their child to and from choice districts, often creating a logistical and financial burden that could limit the potential for expanding open enrollment in some areas.

“Transportation systems across the nation and in Ohio are archaic and have often been siloed by each district,” Churchill said. “It’d be great to see — especially in an area with higher density like Columbus or Cleveland — a more regional approach to transportation where transporting a student across district borderlines wouldn’t be such a problem as it is today.”

(The 74: No Passing: 7 Things You Need to Know About America’s Ailing School Bus System)

Previous research on the topic based on student-level analyses in Michigan and Colorado indicates that who participates in open enrollment programs, and for how long, are state-specific, the authors said. But results in both states showed that participation is often short-lived, with disadvantaged populations most likely to shuffle in and out of interdistrict choice programs.