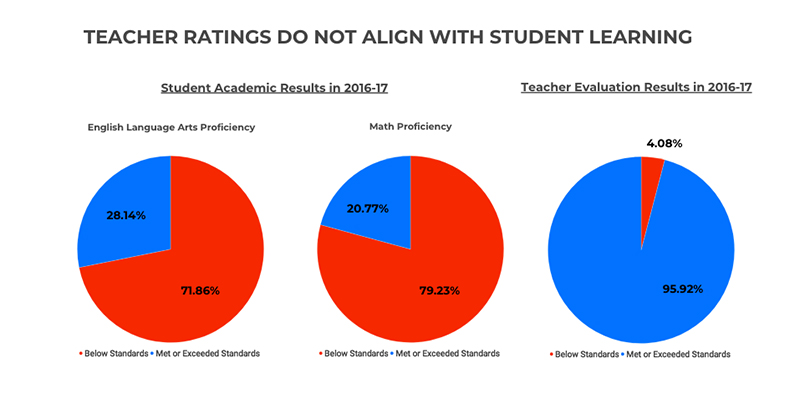 New data show that almost half the teachers at LA Unified’s lowest-performing schools have not been evaluated for at least three years, and nearly all of those who were had received favorable ratings.

Now the school board’s vice president is calling for more regular evaluations, which he said could require negotiating changes to the city’s teachers union contract.

Teachers have been working without a contract for over a year. Early this month, United Teachers Los Angeles declared it was at an impasse with the district in its negotiations. Then the union reversed itself and said talks could resume this week.

“As a former teacher, I know evaluation is a tool for improvement, and I think it’s important that teachers as professionals are regularly evaluated to know where they’re strong and areas of growth, so the idea that we’re not evaluating our teachers is not just a disservice to the kids in our schools and their families but also to the teachers that can really benefit from understanding how to continue to improve,” Nick Melvoin, the board’s vice president, told LA School Report.

“The one thing I’m hoping to understand is how much of this can we do unilaterally,” Melvoin said. “We need to be evaluating teachers more regularly. It’s only fair to them, not only the kids. But also, can we do that, or do we have to bargain it? And if we have to bargain it and negotiate on evaluation, then this is an important thing.”

Board president Mónica García declined to comment on the teacher evaluations and the union contract.

While over 70 percent of the students attending the 44 lowest-performing schools in the district are not proficient in either math or reading, 46 percent of their teachers were not evaluated at all from 2014 to 2017, says an analysis of district data by Parent Revolution, a nonprofit education advocacy organization in Los Angeles. Only one of those schools evaluated more than 50 percent of its teachers, according to public records revealed just weeks after the end of the school year.

Those schools are rated at the lowest two categories — red or orange — in reading, math, and English learner progress on the California School Dashboard, the state’s accountability system that launched in the spring of 2017. Only one of the 44 schools showed any improvement in reading from the previous year, and 31 of the schools showed worse results.

From 2014 to 2017, 23 of the schools gave every teacher who was evaluated a satisfactory rating. 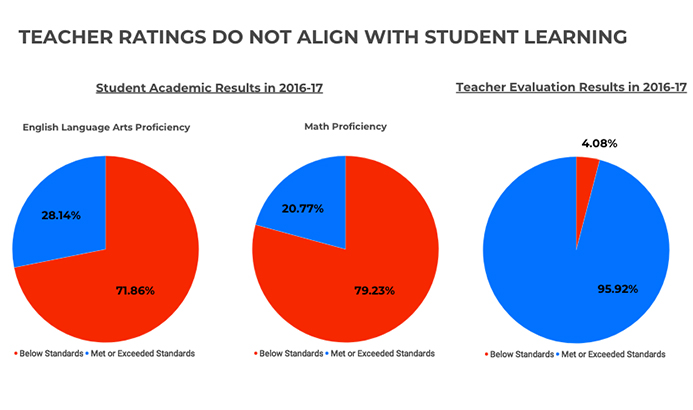 “The district has the data, they acknowledged it. We are very interested in seeing if the district will choose to do any differently or if they think this is OK,” said Seth Litt, Parent Revolution’s executive director. “California has not come up with the definition of what is considered an effective teacher, so it’s the responsibility of the district to figure that out. With an ongoing [contract] negotiation, this needs to be addressed.”

Melvoin said, “I hope all the parents at Parent Revolution would help us work with the union so they can see this is actually beneficial for teachers.”

Melvoin said the district has tried to strengthen teacher evaluations, but the teachers union has taken the district to court over making students’ test scores part of teachers’ job performance evaluations.

In 2013, former superintendent John Deasy moved to make test scores 30 percent of teacher evaluations, but UTLA filed an unfair labor practices complaint. The union and the district eventually agreed to include test scores as part of evaluations but did not agree on a specific numeric requirement.

The union contract states that “teachers have to be evaluated every other year and probationary teachers are evaluated every year. Teachers with 10 years of district experience may stretch evaluations to every three, four, or five years with the consent of their evaluator, who has complete discretion. All teachers who receive a final evaluation of ‘below standard’ must be evaluated the following year.”

Litt said, “I wonder if all 46 percent of those teachers who had no evaluation in three years had been teaching more than 10 years and whether they have an evaluation on record at another school during those three years. It’s hard to tell without the district sharing that information.”

He said the district knows how long each teacher at those schools has worked but Parent Revolution did not receive that information because of contract rules.

We looked at 44 of the lowest-performing schools in LAUSD. More than half rated every single teacher satisfactory or above three years in a row, even as schools churned out low student outcomes. @PIENetworkhttps://t.co/tOjBMzplC5

Not-so-fun fact: In over half of the 123 largest school districts, tenured teachers can go 2-5 years between full formal evaluations, as long as their previous evaluation rating was proficient or above. Learn more about how teachers are being evaluated: https://t.co/KUHTCM4UVo

In over half of the districts, tenured teachers can go two to five years between full formal evaluations, as long as their previous evaluation rating was proficient or above. In the interim, many districts evaluate these experienced teachers using abbreviated evaluations, such as only using student growth data or bypassing some of the metrics, according to NCTQ, a nonpartisan research and policy organization committed to modernizing the teaching profession.

The organization states that because a teacher’s job is multifaceted, they should be evaluated using multiple measures that capture different elements of their practice. It says evaluation ratings are more stable and better at identifying more effective teachers when they combine three general measures: professional practice, student growth, and student survey data. Twelve districts — mostly in California — evaluate teachers on only one measure: professional practice, which is based on a teacher’s classroom observations, the organization found.

To help its most struggling schools, LA Unified this coming school year will use a new student needs index to distribute resources more equitably, and it will continue advocating for fair school funding at the state and federal levels, according to the district’s statement. “As we better serve our students and families, we must provide more effective teacher training, mentoring and evaluation. It is our goal to ensure equitable distribution of effective teachers and leaders across schools, subjects and specialty areas. We will continue to partner with parents and community groups to improve student success and enhance the quality of parent engagement.”

Bill Lucia, president of EdVoice, an advocacy organization, said in a Parent Revolution news release, “The evidence demonstrates these schools are clearly failing students, and yet certificated staff are overwhelmingly receiving satisfactory or above ratings by evaluators. The district appears to be systematically derelict in taking seriously the state law requirement to actually identify and endeavor to assist struggling teachers so they can become effective in helping all their kids reach grade-level academic expectations.”

Elsie Garcia, mother of an LA Unified eighth-grader, said in the news release that it’s very important for parents to know whether or not their child has an excellent teacher in the classroom. “I’ve seen firsthand the difference it makes when my son has had a great teacher, and I’ve also seen him fail to be challenged by teachers who clearly need more guidance and support. All students in LAUSD deserve excellent teachers for every year of their education.”

This spring, members of Parent Revolution’s Parent Power Network asked LA Unified board members to review the current improvement plans at the lowest-performing schools. They presented the board with examples of what they saw as poorly constructed school plans, which had been approved by the district.

At the June 12 board meeting, a majority of board members acknowledged that the improvement plans the parents had shown them are incomplete or insufficient and that they had been approved without proper oversight.

In a resolution the board unanimously passed at that meeting, “Realizing the Promise for All: Close the Gap by 2023,” the board has directed the district to develop tougher school site improvement plans and to exempt the principals of the lowest-performing schools from having to hire off the district’s “must-place” teachers list.