New Report: Schools Pay a Premium for Experienced Teachers But It May Not Boost Teacher Quality 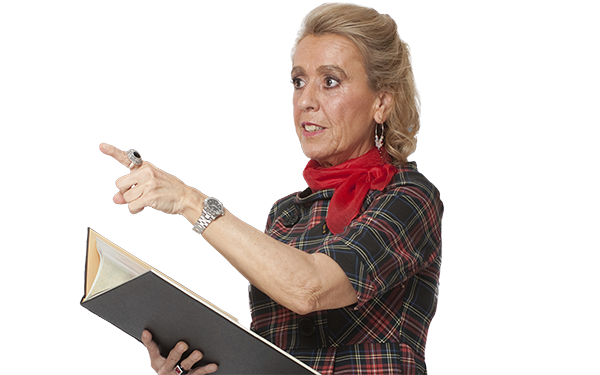 School districts are paying an even greater premium for teacher experience than previously thought according to a new report from The Manhattan Institute, a right-of-center think tank. That’s because of heavily backloaded pension plans, which exist in each of the country’s ten largest school districts.
The report is the latest volley in a long-running dispute about the extent to which teacher compensation should be based on years of service. School reform advocates have long argued that traditional salary schedules place too much emphasis on experience. This new research suggests that teacher compensation is even more backloaded than previously thought.
Here’s how authors Josh McGee and Marcus Winters get there. First, they take teachers’ take-home salary, which already rewards experience; then they layer on compensation1 from teachers’ pensions, based on a hypothetical teacher who started her career at age 25. 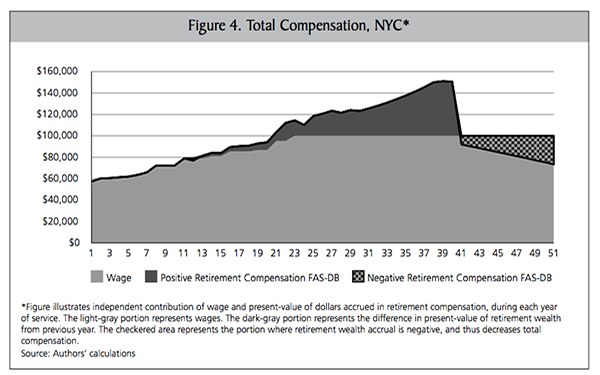 Source: Center for State and Local Leadership
As the graph above shows, New York City teachers’ salaries flatline after twenty years of experience, but their compensation continues to grow for many years after. Then an experienced teacher’s compensation plummets after 39 years in the system. How can that be? It’s because at some point a teacher can no longer achieve a greater pension, and any additional years she remains teaching are years she’s not collecting her pension.2 A similar pattern exists in Chicago, Houston, and Los Angeles.
Even more bizarre are systems like Philadelphia’s, which look like a mountain range. 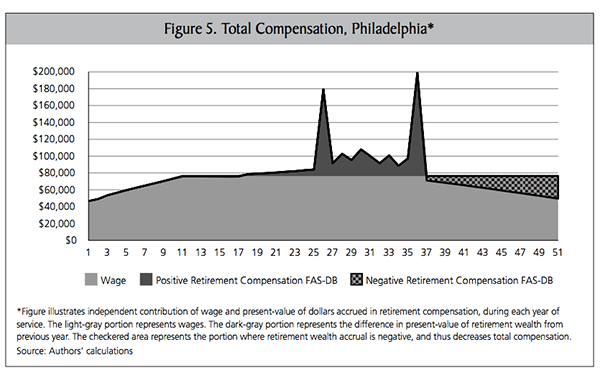 Source: Center for State and Local Leadership
What this means is that a teacher with 25 years of experience essentially receives a nearly $100,000 raise her next year, before getting an $80,000 pay decrease the following year. Graphs of compensation look similar Broward County, Florida; Clark County, Nevada; Dade County, Florida; the whole state of Hawaii; and Hillsborough County, Florida.
The key question then becomes whether any of this is harmful to teacher quality? McGee and Winters argue that it is, pointing out that research suggests that teachers make the most improvement in their first couple years on the job. To them that means the premium districts pay for experience throughout teachers’ careers — in both salary and pension compensation — is misguided. Their alternative is a cash-balance system that maintains a traditional annuity, but in which teachers accrue pension value more smoothly over time. They model such a system, holding costs constant, in the country’s ten largest school districts. (See New York City below.) 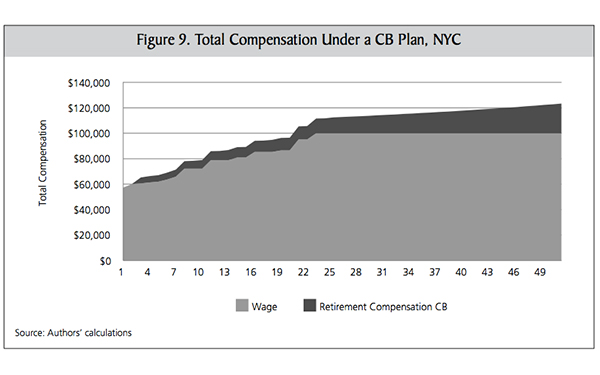 Source: Center for State and Local Leadership
We don’t know for sure whether a less back-loaded approach for pensions is preferable to the current system, but there is good reason to think it might be. Compensation packages should be designed to recruit and retain effective employees, and in theory teachers might look at the relatively generous pensions after many years of service as good reason to enter and stay in the profession.
But empirical evidence doesn’t suggest they do nearly as much as we’d expect: pensions don’t really help retain early or mid-career teachers. Indeed, one study found that teacher valued pensions at only nineteen cents for each dollar in actual value. This in turn suggests that deferred compensations packages are unlikely to significantly help recruit teachers into the profession. Having a more front-loaded retirement system might help change that.
There is good evidence that there are strong retention effects of pensions for teachers very near retirement age. That’s something, but it’s not clear why schools would want massive retention incentives for teachers near a prescribed retirement age, and then significant disincentives immediately after. Winters and McGee are also right that heavy investment on retaining late career teachers over early or mid-career ones doesn’t align with research on teacher experience. We might even worry that such systems provide too much of a retention incentive for less-effective late career teachers who might otherwise want to retire early or leave the system.3
Moreover, one study found that districts with more front-loaded salary schedules had better performance than districts with backloaded ones. (This study, however, was looking at correlation, not causation, so should be interpreted cautiously.) It also appears that compensation for doctors and lawyers is significantly less backloaded than teacher compensation.
All in all, this report is an important contribution to the ongoing debate on teacher compensation and pensions. It’s just the latest of many reasons to think our current compensation systems are not maximizing teacher quality. The question now is whether policymakers will do something about it.

Footnotes:
1. This is a little tricky because the authors are looking at the net present value of the pension, which requires calculating both the amount of the annuity (yearly payout) as well as how long the teacher will likely collect it. Teachers receive their pensions once they retire and until they die. (back to story)
2. This means the although the amount of annuity the teacher receives each year after retirement would stay the same, but the net present value of the pension would go down because a teacher would have fewer post-retirement years collecting that pension. (back to story)
3. Although it’s true that on average more experienced are more effective than their less experienced colleagues, these averages masks a large degree of variation between teachers in the same experience level. That is, there are many excellent novice teachers, and ineffective veterans. (back to story)
Submit a Letter to the Editor
October 6, 2015