A New Jersey judge swiftly dismissed a lawsuit Wednesday that challenged state rules requiring school districts to base teacher layoffs on seniority regardless of performance in the classroom.

New Jersey Superior Court Judge Mary C. Jacobson told a Trenton courtroom that the plaintiffs had failed to establish how seniority-based layoff rules known as “last in, first out” were harming their children.

“I don’t see any link other than speculation and conjecture between the LIFO statute and the denial of a thorough and efficient education to these 12 children,” Jacobson said.

The lawsuit, HG v. Harrington, was filed in November on behalf of a dozen Newark students, claiming that “last in, first out” mandates governing teacher layoffs violate their right to a “thorough and efficient” and “equal” education system under the state Constitution.

The complaint was sponsored by The Partnership for Educational Justice, a national education reform nonprofit founded by 74 co-founder Campbell Brown. Named defendants include the New Jersey State Board of Education and Newark Public School District.

The American Federation of Teachers and the New Jersey Education Association, considered “intervening” defendants in the case, filed the motion to dismiss.

The parent plaintiffs charged that children attending Newark Public Schools and other poverty-ridden districts are denied an equitable education because statutes requiring “quality-blind” layoffs force those districts to lay off effective teachers rather than ineffective ones, or to cut spending elsewhere in the budget rather than lay teachers off.

In recent years, Newark Public Schools avoided layoffs by refusing to assign ineffective educators to any job, placing them instead in the Educators Without Placement Sites (EWPS) pool.

Even without a job, those educators are still paid — a cost that ballooned from $6.4 million in the 2011–12 school year to $22.6 million in the 2013–14 school year. Newark Public Schools Superintendent Chris Cerf, who was appointed in 2015, has since transitioned hundreds of those unassigned educators back to the classroom. Newark Public Schools plans to spend about $8 million for an estimated 80 educators in the EWPS pool next school year, according to the district. 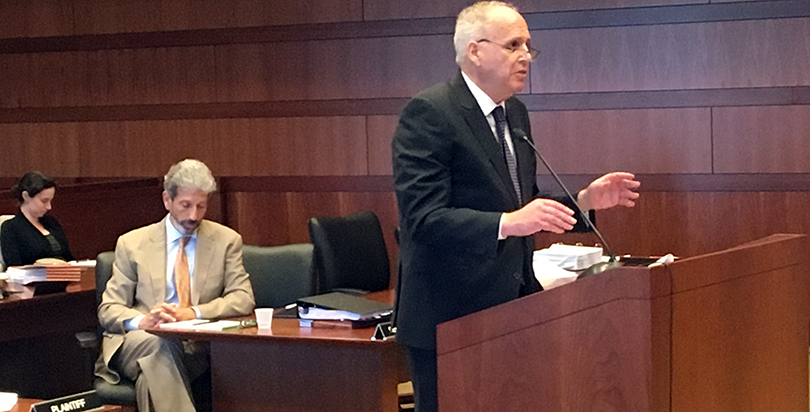 Kathleen Reilly, a lawyer for the plaintiffs, called the EWPS pool a “work-around” that “diverts the district’s already limited resources” to pay the salaries of ineffective teachers.

But union lawyers argued that because Newark Public Schools has not laid off teachers recently or announced a plan to do so in the immediate future, the plaintiffs did not establish negative consequences of the rules.

Reilly said the plaintiffs might appeal the dismissal to the appellate court or replead the case.

“I don’t think these parents want us to move on” from the case, she told reporters after the hearing.

HG v. Harrington is the third lawsuit filed by the PEJ challenging teacher tenure protections. In 2014, the group filed Wright v. New York, which is currently before the state Supreme Court. Last year, the group filed Forslund v. Minnesota, but it was dismissed by a judge who said issues governing teacher layoffs should rest with state lawmakers. The plaintiffs in that case have since appealed the judge’s decision.

Editor’s Note: 74 co-founder and board member Campbell Brown founded the Partnership for Education Justice. The Walton Family Foundation partially funds The 74 and PEJ.