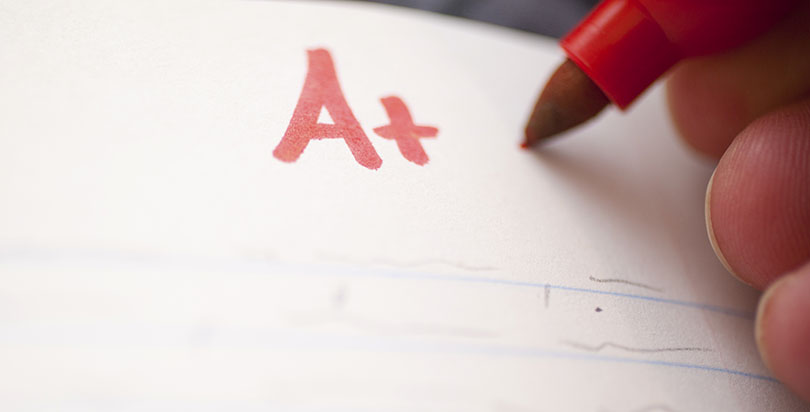 New research from the Center for American Progress finds that low-income students in states with strong standards and accountability policies made greater gains on federal tests. The research comes just as the federal government has partially backed away from such policies, bowing to a growing backlash against testing and the Common Core standards.
The new report by Ulrich Boser and Catherine Brown of the left-leaning think tank Center for American Progress examines scores on the National Assessment of Educational Progress (NAEP), comparing NAEP gains to states’ actions in adopting tougher standards, assessments, and accountability systems.
Specifically, the researchers looked at the quality of each state’s academic standards, whether state tests are aligned to those standards, and whether stakes — such as sanctions and rewards for low- and high-performing schools, respectively — are attached to those tests. They then used a statistical technique which revealed states with better scores on measures of standards, assessment, and accountability saw larger NAEP gains in eighth grade reading and fourth grade math. (The results for eighth grade math and fourth grade reading were not statistically significant.)
“The evidence on standards-based reform strongly supports the potential of the Common Core to drive improvements in educational outcomes for all students,” Boser and Brown write.
The report also points out that some of the states that have ditched the Common Core, including Oklahoma and South Carolina, have posted poor test results.
The study recommends further investing in curricula, training and rigorous assessment in order to get the most out of the Common Core: “Standards-based reform does not happen in a vacuum, and states should support teachers to grow their practice as they transition to the new standards.”
The conclusions are somewhat tempered by the study’s limitations, which the authors openly acknowledge at points. “We tried to be very honest about the research issues,” Boser said in an interview ahead of the report’s release, the main one being that it’s difficult to show that accountability policies cause increases in achievement. This is a classic “correlation does not equal causation” problem.
Those reservations aside, other more sophisticated analyses have produced very similar results. For instance, a report last year from the liberal-leaning think tank Economic Policy Institute also showed that accountability policies were associated with gains on the eighth grade math NAEP.
Co-author of that report, Stanford professor Martin Carnoy, said in an interview, “I'm confident … that accountability did make a difference” in which states had larger NAEP increases. Carnoy added that that testing policies tend to be especially helpful for low-performing students, pointing out that he found that disadvantaged students have made significant gains on international tests in recent years, while more affluent students have actually slid backwards.
This squares with Boser and Brown’s finding that accountability policies benefit low-income students, and may help explain why civil rights groups led the charge to preserve annual testing in the federal education law.
Critics of test-based accountability policies argue that they have led to certain unintended consequences, such as a hyper-focus on multiple choice assessments and reduced focus on non-tested subjects like art and music. Boser says there’s some validity to those arguments: “I do think we’ve seen a narrowing of the curriculum [and] adverse effects around test prep.” Other research has shown that No Child Left Behind’s system of accountability did not harm students’ non-cognitive skills or enjoyment of learning but likely produced instances of cheating, teaching to test, and narrowing of the curriculum.
The authors stand on somewhat shakier ground with their self-described “anecdotal and impressionistic” aspects of the report, particularly when it comes to Common Core. Although there is some limited positive evidence, the jury is still out on whether the new standards will improve academic achievement.
A final thought: The report would have done well to unpack the host of different policies placed under the banner of “standards-based reform.” Certainly creating an aggregate measure of accountability is helpful, but so is looking at individual policies in isolation. For example, the report equally credits states for rewarding schools that meet test score targets and sanctioning schools that don’t. Yet recent research found that the former policy actually harmed students while the latter helped them.
Perhaps the question we should be asking these days is less “Did standard-based reform work?” and more “What aspects of standards-based reform worked?”
Submit a Letter to the Editor
January 14, 2016