New Book Helps Teachers Unlock Secrets of Virtual and Augmented Reality With Lessons, Apps, and Strategies for the Classroom 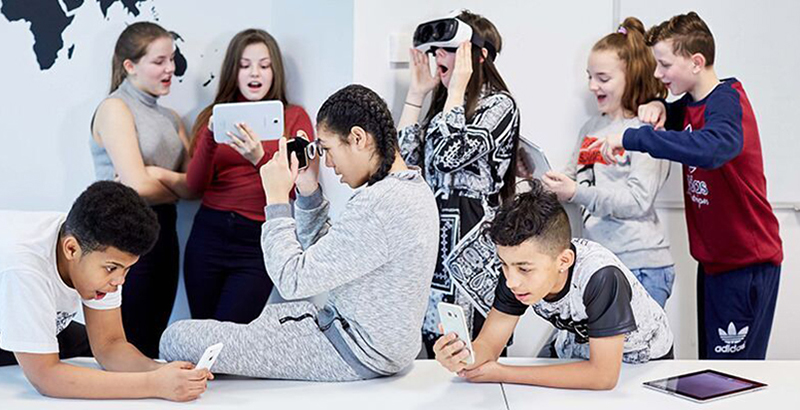 As teachers clamor to open up new worlds for students, in-classroom immersive technology affords an opportunity for kids to face a virtual hurricane, take a “walk” through space, or hold a beating heart in their hands.

The continual search for ways to incorporate virtual and augmented reality in the classroom in a meaningful and dedicated way led the International Society for Technology in Education to publish a book, titled Learning Transported: Augmented, Virtual and Mixed Reality for All Classrooms, to offer practical insights, lesson plans, and classroom examples so educators can make the most of these experiential worlds.

“While it’s easy to get excited about these experiences and their classroom potential,” says author Jaime Donally, a former teacher who now trains staff on technology, “it’s important to first understand the technology and its connection to learning and form a clear plan for how it is to be used and implemented.”

Donally writes that many educators think that giving students engaging technology experiences — whether creating 3-D worlds or holding holograms in their hands — requires expensive purchases or dedicated experts. “The truth is that many resources are available now on the devices already in the classroom,” she writes. “The implementation of these tools can be as simple as opening an app or loading a website.”

Donally and ISTE, a nonprofit dedicated to accelerating the use of technology to solve tough problems and inspire innovation, offered The 74 a peek inside Learning Transported to give readers practical advice moving forward.

First, though, let’s define a few terms. Augmented reality superimposes a digital layer on the world around us, often activated by scanning a trigger image or via GPS (think Pokemon Go!). Virtual reality takes users away from the real world, fully immersing students in a digital experience that replaces reality. Mixed reality takes augmented a step further by allowing the digital and real worlds to interact and the digital components to change based on the user’s environment.

The following are selected excerpts from Learning Transported to help educators get started in the world of changing realities:

The lesson begins with the students planning out their space on paper. The space will include three-sided to eight-sided objects. After the space has been planned, students will use the CoSpaces app to organize and categorize the various shapes. The virtual reality space allows students to easily drag and drop objects to a plane that can be shared with a simple link for others to view. Students will categorize 2-D objects and 3-D objects based on faces and vertices.

Students will be able to identify and categorize various shapes.

Students will be able to describe and name shapes in the environment.

Teachers share an example of a virtual world created in CoSpaces and explain the process. Students then draw their space using 2-D and 3-D objects. After logging into their Maker account at CoSpaces and selecting “create space,” they design their space and drag and drop objects and images into the space.

Students create videos in the Storyfab app, beginning by drawing a picture of a beach as their trigger image. After the teacher gives directions on how to use the app, the students open one of the prebuilt scenes featuring pirates. Students can use animation in the story to change character mood and props in the scene to support a plot. Using multiple characters, students can record a scene of the story and, within that recording, describe the who, what, and where.

Students will be able to create a drawing and customize the scene related to the story.

Students will be able to describe the people, place, things, and events in the story.

Students will be able to describe feelings and context using animation and digital objects.

Teachers can begin by sharing an example of a story in Storyfab; then students can draw a beach scene with contrasting colors. After opening the app, students select the pirate scene and load their beach drawing. From there, students adjust items in the scene and move around props while changing the animation. Students can record their story audibly once their scene is set.

Augmented and Virtual Reality with EON

The students will explore the Earth’s properties using 3-D objects and augmented and virtual reality. The lesson shows views of Earth’s components, including continents and oceans.

Students will explore the Earth’s properties using 3-D objects and augmented and virtual reality. The lesson shows views of Earth’s components, including continents and oceans.

Teachers can have students begin the lesson by writing predictions about the Earth’s layers and discussing vocabulary relating to the Earth’s features, such as terms associated with land, ocean, and space. Students will then go through the Earth Science Lesson and Earth System Course in EON Creator to view the Earth in 3-D. Following the exploration, students can review the accuracy of their predictions. The Creator App also includes a solar system section, which may attract older students because of its complexity.

Scavenger Hunting as a Classroom Activity

The WallaMe app is a fairly new tool that uses augmented reality and location-based messaging. The app offers teachers a unique way to create a scavenger hunt by designing AR messages and leaving them in specific places for students to “discover.” The messages can include typed text, drawings, stickers, and pictures. Students downloads the WallaMe mobile  app on iOS or Google Play and search for walls to view. When students are in close enough proximity, the walls will be available to find and view. Students can then see the message, take a picture of the wall, and save it to their camera roll. The wall can be private for a single individual, shared with a specific group of students, or open to the public to find and view.

Teachers can also use the WallaMe app to leave notes, tips, activities, or other information for students to capture. Students can create walls themselves or provide support for classmates on solving a problem. Using the app to identify north, east, south, and west or solve math problems using nearby resources can get students actively engaged and learning in any subject or grade level.

The Waypoint App also allows for creation of educational scavenger hunts using augmented reality. Educators can easily add questions that address lesson objectives, set specific locations where the questions are hidden, and then have students hunt for questions by following the map. The hunt is easily shared with students on a variety of platforms, including text messaging and email.

The benefit of the Waypoint app is getting students up and roaming around boundaries established by the instructor to search for each question. For each problem solved, students can add coins to their treasure. Currently, the Waypoint app requires newer iOS devices, but an expansion to Android devices is coming. Features such as uploading your own 3-D objects will be part of future updates.

Breakout EDU has become a popular game in education. Driven by creativity, teamwork, and problem-solving, the game provides a fun learning experience as it challenges students to compete in solving puzzles. The game centers on a series of questions; each solved question unlocks the next part of the activity. Students work in groups, competing against other groups to open all the locks first.

Lessons include having students use Google Translate to convert text from Russian to English, using the RoundMe app to view 360-degree images and answer questions about them, and bringing a page to life in augmented reality with the Quiver Vision app. Creating a Breakout EDU game can be simple or extensive, depending on how complicated or customized teachers want to make the challenges. Many challenges can be found at the BreakoutEDU website and can be altered by grade and subject level.

The AR Circuits app brings together fun and learning by exploring basic concepts of circuits and electricity. No electronics kit in your classroom? No problem. The AR Circuits app brings the experience through your mobile screen using augmented reality. There is a small cost for downloading the app in Google Play or the App Store. Printable trigger image cards have symbols to represent working electronic components that are viewed through a mobile device. When viewing the trigger image cards within the AR Circuits app, the cards turn into realistic simulated components.

As the cards are rearranged, the activity builds knowledge about various components including the wire, battery, switch, bulbs, resistor, and conductor. The parts can be placed together, for example, to turn on a bulb. The user can dim the bulb by adjusting the resistance and the battery voltage.

When a required component is missing, it’s clear that the bulb is not receiving electricity. Users can receive immediate feedback by testing out various combinations of components and seeing the results.

Google Earth and its detailed satellite imagery have been around for some time. What began as a website became an app and most recently added the benefits of 3-D and 360-degree views, accessible at earth.google.com or through the app at Google Play or the App Store. If you have an HTC Vive or an Oculus Rift, you have access to Google Earth VR.

The most recent release of Google  Earth has the Voyager feature, interactive stories that bring current and past events to life as they share 3-D views, videos, and information. One highlight is the Hurricane Harvey experience that gives a full picture of the devastation that hit the southern portions of Texas with massive flooding in 2017. Describing the facts of the hurricane, Google Earth walks the viewer through numerous locations that sustained significant damage. Students can also use Voyager to become explorers with Lewis and Clark, Marco Polo, and Eric the Red; follow the journeys of Charles Dickens and Ernest Hemingway; and visit national parks, beaches around the globe, stadiums, and craters.

Spy Quest, a new augmented-reality book series, is coming from Scotland to the United States. The SpyQuest app allows teachers to scan images within the book that then become a video on top of the page. The books can be helpful for reluctant readers by drawing them into an interactive experience that requires strategy and code-breaking to solve mysteries.

The series has had success as learning  and gaming are applied together using immersive technology. Students around the world are finding a love for reading from Spy Quest’s creative approach.