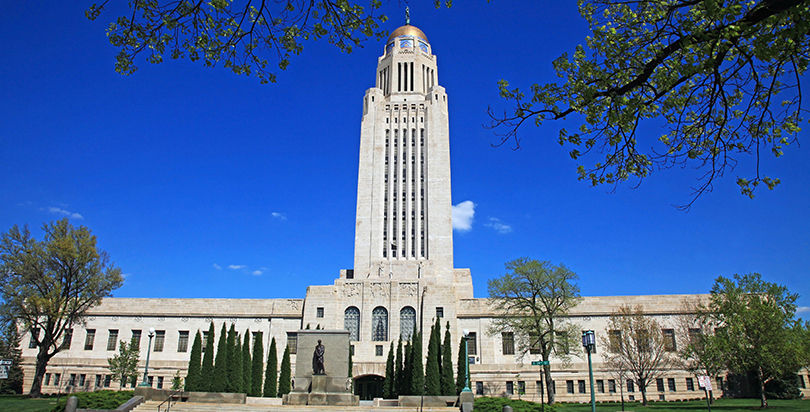 See more coverage of School Choice Week 2017
Nebraska lawmakers guaranteed last week that the state legislature would have a contentious 2017 session by introducing a barrage of education reform proposals, including high-profile bills that would allow for charter schools for the first time, create a voucher system for students in low-performing public schools and overhaul school accountability.
The charter bill, introduced Wednesday by Republican Sen. Tyson Larson and co-sponsored by freshman Sen. Lou Ann Linehan, revives a debate over the publicly funded, privately run schools that are permitted in 43 other states.
Similar proposals in past years have failed to gain traction in Nebraska’s officially nonpartisan unicameral legislature. In 2015, the education committee voted down a Larson bill seeking to open five charter schools in Omaha. (Omaha Public Schools, the largest district in the state, operates a districtwide school choice and open enrollment program for its 52,000 students.)
But supporters of such measures believe political shifts statewide and nationally — especially the nomination of charter and voucher proponent Betsy DeVos for secretary of education in the Trump administration — add fresh momentum to their efforts. Trump carried the state in the presidential election with 58.7 percent of the vote.
“The fact that he is supportive of reform is helpful,” said Linehan, adding that DeVos, in her confirmation hearing Tuesday, “did a fine job, she will get confirmed, and she’s going to be talking about these issues.”
(The 74: DeVos Pledges Not to Gut Public Schools or Force School Choice During Confirmation Hearing)
Linehan added that a power shift on the state education committee, of which she is a new member, contributes to her optimism.
“We’ll actually have a chance to talk openly and honestly about spending, about accountability, about what’s really going on,” said Linehan, who previously worked for Chuck Hagel when he was a senator, and for Colin Powell during the Bush administration.
Although Republicans, who control the legislature by a wide margin, lost a handful of seats, they were able to gain seats on the traditionally left-leaning education committee — which became evenly split, the Lincoln Journal Star reported. The committee’s new chairman, Republican Sen. Mike Groene, however, has expressed support for accountability for public schools and would consider measures to allow vouchers or charters, the paper reported.
Larson’s office did not respond to a request for comment.
Linehan and Larson’s bill would create the Independent Public School Authorizing and Accountability Commission, which would grant five-year renewable charter compacts to qualifying applicants and provide oversight.
Under the proposal, nonprofit, tuition-free charter schools could operate in school districts with at least one school rated at the lowest performance level, based on state rankings.
The bill also includes a provision apparently intended to help new charters recruit certified teachers. Under the proposal, teachers at public school districts could opt to take a leave of absence for up to four years to teach at a charter; upon return to their district job, they’d be entitled to their previously earned benefits.
“If we’re lucky enough that somebody who does this well comes to Nebraska and opens a charter school, the state would be picking up the tab,” Linehan said. “And what I’m most excited about in all of them is, in the end, kids get educated.”
The senator’s daughter, Katie Linehan, leads the pro-charter organization Educate Nebraska.
“A child’s ZIP code should never determine the quality of her education. Unfortunately, for far too many Nebraska children today, that is the reality,” Linehan said in a statement. “School choice empowers families and helps ensure every child can access a great school. We’re excited about what this legislation would do for families in Nebraska.”
Opponents say charters and vouchers will sap funds from public school coffers, further burdening school districts even as the state faces a budget deficit.
Ann Hunter-Pirtle is a 2005 graduate of the public schools in Lincoln who recently founded Stand for Schools, a public schools advocacy organization. The charter and voucher proposals would specifically hurt rural districts, she wrote in an email to The 74, because they would be forced to release their already dwindling tax dollars and even risk closure.
“Putting public tax dollars into private hands, whether through charter schools or vouchers, poses significant risks — including the wave of tens of millions of dollars of waste, fraud, and abuse witnessed in Ohio, the failure of vouchers in Milwaukee to deliver results, and the nightmare that is the Detroit school system thanks in large part to Betsy DeVos’s involvement. That risk is not worth taking when our public schools are doing so well and when our school boards are providing effective oversight,” she said in the email.
Hunter-Pirtle added that her organization supports strengthening accountability for schools and districts but that she favors a system that prioritizes student growth over proficiency on a single test, unlike a proposal introduced by Sen. Linehan. The bill would replace the current accountability system, which the Linehans believe may not meet the requirements of the Every Student Succeeds Act, with one that grades schools on an A–F scale, the Lincoln Journal Star reported.
(The 74: Barnum: The Growth vs. Proficiency Debate and Why Al Franken Raised a Boring but Critical Issue)
Among the several dozen other education measures introduced by legislators and referred to the education committee are:
Spokespersons for the Nebraska State Board of Education and the Omaha Public Schools Board of Education said they will withhold comment until their members can fully review the proposals. Both boards meet Monday.
The Nebraska State Education Association, which represents 28,000 public school teachers and other school professionals, declined to comment.
See more coverage of School Choice Week 2017
Submit a Letter to the Editor
January 22, 2017