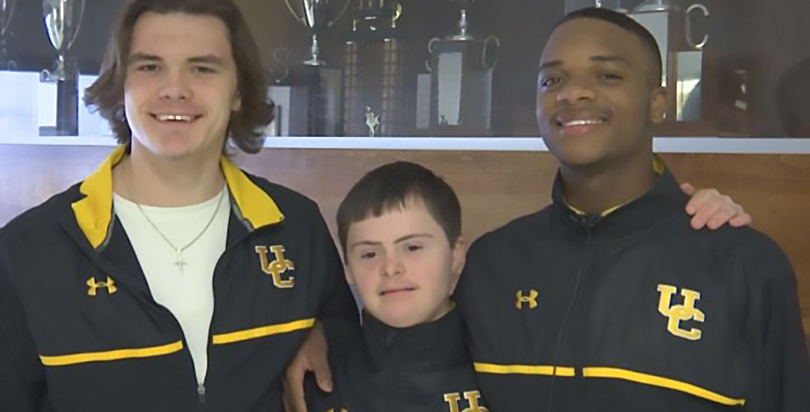 This article is one in a series at The 74 that profiles the heroes, victories, success stories and random acts of kindness to be found at schools all across America. Read more of our recent inspiring profiles at The74million.org/series/inspiring.
It starts out like any other video shot with a cell phone camera by a proud parent at a basketball game. But the roar from the crowd when Chandler Austin shoots and scores for the Union County (South Carolina) High School varsity boys team is something special.
Chandler, a 15-year-old freshman, was born with Down syndrome and didn’t walk until he was 2 years old. Doctors said he might never speak. But he has always pushed forward — no matter what, as his mom, Amy Austin, told WMBF News. And he’s had support every step of the way.
That includes not only his family, coach and Yellowjackets teammates and fans, but the players and fans of the rival Eastside Eagles, too.

At a recent game at Eastside High, the crowd chanted for Chandler — number 40 — to be put in. Then, he dribbled up the court and made an uncontested shot, thanks to extra-special sportsmanship from the Eagles. The entire gym erupted in whoops and cheers.
Austin filmed it all and posted the video on Facebook. She wrote:
I’m not going to lie, I did shed a few tears just now! The support of the #UCHSvarsitybasketballteam and the sportsmanship of #EastsideEagles team and fans, oh, and my boys basket … made this momma and daddy very proud tonight!! #stillshaking #hardtotype Feel free to share this video. #InclusionWorks
It wasn’t so much that he made the basket — though that was nice — but the unconditional acceptance of her son that meant so much. “For him to be given the opportunity to be part of the basketball team as a team member, not as a manager, but to be part of the team, is incredible,” Austin said. “It makes us feel good, because when he was little we didn’t know that he would have these opportunities. We didn’t know what was going to happen.”

Union County player Brandon Thompson told WMBF that the team is one big family, and Chandler is a big part of it. “Chandler is like my little brother,” Brandon said. “When you see somebody like Chandler who loves it so much, it just makes you want to give 110 percent every day.”
Submit a Letter to the Editor
February 5, 2017