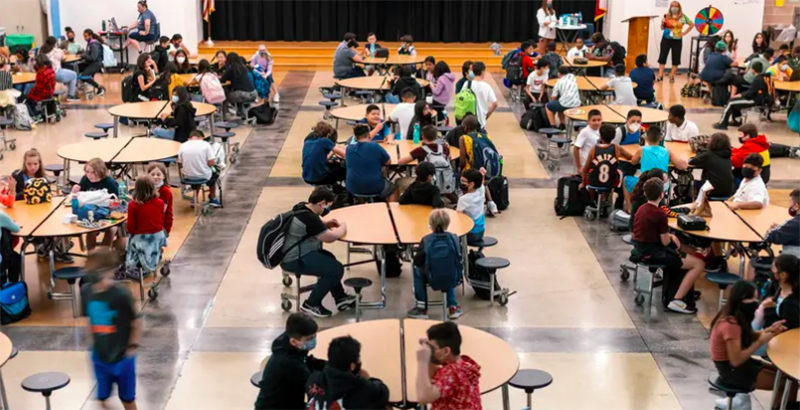 Between Aug. 16 and Aug. 22, there were 14,033 positive COVID-19 cases reported among students across the state. (Jordan Vonderhaar / Texas Tribune)

Even as some Texas schools hadn’t yet started the school year, the number of positive COVID-19 student cases statewide reported the week of Aug. 16 surpassed the peak seen any time last year, state data shows.

Between Aug. 16 and Aug. 22, there were 14,033 positive cases reported among students across the state, 34% more than the week with the most student cases reported last school year, the Department of State Health Services data shows. That week’s totals also represent a 182% increase from the week ending Aug. 15, though fewer students were in school then.

There have been 20,256 reported cases among students since the state agency started tracking data on Aug. 2 for this school year. That’s less than 0.4% of the 5.3 million students enrolled in the state as of January. Districts with the highest rates of cases include Midland, Humble, Conroe, Corpus Christi and New Caney, all of which reported more than 10 new cases per 1,000 students, based on January enrollment numbers.

Out of these school districts, Corpus Christi is the only district with a mask mandate, and it was recently issued for 30 days after school officials saw a rise in cases. 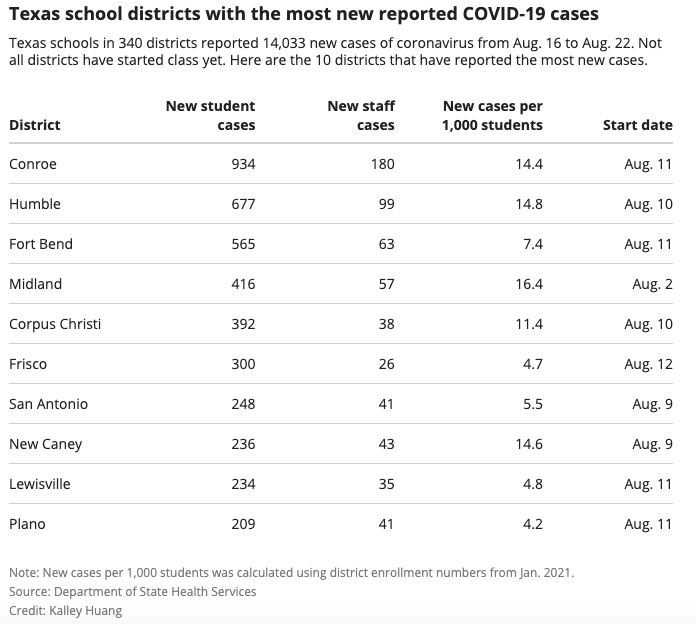 Districts were allowed to require masks last school year. But for the better part of the last month, the rules around masking requirements have gone back and forth in Texas courts.

Gov. Greg Abbott has tried to ban mask mandates in schools. But some school districts have decided to continue the masking orders anyway, joining lawsuits that have had varying degrees of success. Meanwhile, the battle has raged in local school districts for weeks as concerned parents on both sides continue to clash. In one instance in Eanes ISD on the outskirts of Austin, the tension led to verbal assault and a parent ripping a mask off a teacher.

State officials said they did not know how many districts have already started school or what share of students those districts serve. At this point last year, districts with slightly less than half of all students had started class, and the state had reported 313 positive cases among students.

Among staff members, there have been 3,425 positive cases reported through the week ending Aug. 22, a 26% increase from the week before.

The rise in cases among students comes as hospitals across Texas continue to fill up and intensive care unit beds become scarce. In more rural districts, schools have already had to shut down because of fears that cases among staff and students could overwhelm already strained hospital systems.

A COVID-19 vaccine for children under 12 is not yet available. Best-case scenarios suggest it could be late September or early October before one is approved.

Brian Lopez is public education reporter and Kalley Huang is a data visuals fellow at The Texas Tribune, the only member-supported, digital-first, nonpartisan media organization that informs Texans about public policy, politics, government and statewide issues.

Kalley Huang is a data visuals fellow at The Texas Tribune.