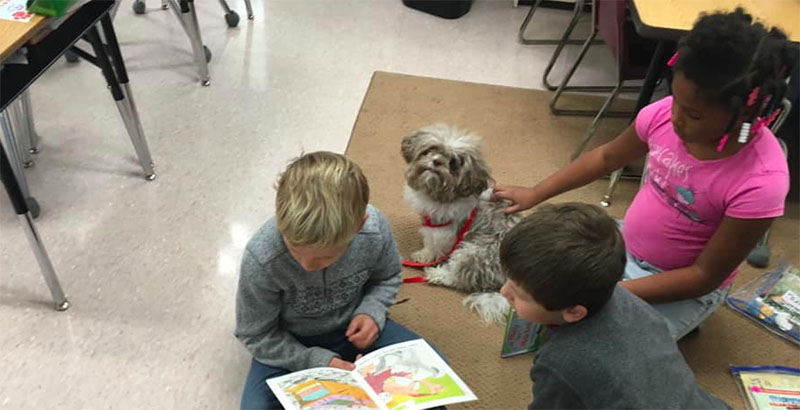 The assignment was persuasive writing, so the first-graders at a school in Muskegon, Michigan, picked a topic nearly every kid has had practice in: They really, really wanted a dog.

But what started as a classroom lesson ended up helping the students, the teachers, the school and even the neighborhood pet shelter, mlive.com reported.

Posted by Buddy Bones the Therapy Dog on Wednesday, June 12, 2019

The kids at Reeths-Puffer Elementary School wrote to their principal, listing the reasons dogs are good for children and helpful in schools. Apparently, they were good persuasive writers, and they got the administrators thinking.

“We started doing research, and it turns out there is a lot of research that says having a dog in school, a therapy dog, is beneficial,” Assistant Principal Karyn Benner said in a video posted by the Muskegon Humane Society. “Last summer, I want to the Humane Society and asked if they would have a dog that might be hypoallergenic and playful and really good around kids and calm and wouldn’t bark a whole lot. So, we had quite a lot of things we were looking for.”

Buddy the school therapy dog who was adopted from The Muskegon Humane Society!

Here's a feel good follow up adoption story! Our sweet guy Buddy was surrendered to our shelter just 2 years ago, he was since adopted and returned two times before he found his purpose and forever home as a Reeths Puffer Rocket in their Elementary School! Buddy greets the kids every morning with a dance and "high paws" before he heads to his office where he steps up wherever he is needed to comfort kids that need him!

Benner soon found Buddy, a cuddly furball who became the school’s therapy dog. She adopted Buddy and now brings him to work every day, where he inevitably sniffs out the neediest child.

“He cheers up teachers who have had a rough moment and supports our school-wide Positive Behavioral Interventions and Supports (PBIS) initiative,” Benner told Good News Network. “We have some highly aggressive students who have elaborate behavior plans. When their behaviors would escalate, our master’s-level staff were often unable to de-escalate them in a timely manner. But when Buddy comes in, the students just melt in a matter of minutes.”

Posted by Buddy Bones the Therapy Dog on Wednesday, June 12, 2019

The story could have ended there, but it was too good not to share. Benner submitted an essay about Buddy to the Petco Foundation’s Holiday Wishes Grant Campaign and noted how the Title I school has many students with diverse social and learning needs.

“Buddy has been an integral part of our ‘support team,’ providing therapy to students when needed,” Benner wrote. “He is used as a reading Buddy, a comfort to those who are sad or upset.”

“Buddy is an awesome dog that was able to reach his full potential because he was given the love and training he needed,” Alexis Ogborn, executive director of the Muskegon Humane Society, said at the ceremony. “There are millions of Buddys out there in shelters, and it just takes people that love them and want to help them find their purpose. We really appreciate you guys doing that for Buddy.”