Like detectives, students and teachers at Christian Heritage Academy searched for clues to uncover the elusive identity of the mystery artist.

For days, elaborate drawings had popped up, seemingly out of nowhere, on whiteboards at the private school in Lakeville, Minnesota.

The subjects of the drawings ranged from religious figures to cartoon characters.

CHA's new janitor, Myron Peterson, is such a blessing to our school. He leaves little drawings on the teacher's white boards to bless them! Check out some of his amazing work. pic.twitter.com/lvYiSAsMOF

The artist left no signature.

Finally, the students finally learned that the mystery artist was the school’s new janitor, Myron Peterson.

​For most of his life, Peterson would likely have described himself as a stick-figure doodler. But two years ago, he told KARE-11, he sustained a traumatic brain injury when a car slammed into his on the highway. The school janitor position at Christian Heritage Academy, where he started working last fall, was his first job since the accident.

No matter how you feel….Get up—Dress up….And Never give up…Ps- Six month check up with the neurologist…Doc said keep the good work up & see you in 6 months….

​Much to Peterson’s own surprise, after the crash, he gained newfound artistic ability. His physical therapist encouraged drawing to aid in his recovery, and he has watched a few YouTube videos to help hone his skill.

Check out the beautiful Christmas-themed drawing CHA’s custodian Myron left on one of our classroom whiteboards! Myron is famous at CHA for blessing our students and teachers with his incredible whiteboard artwork. pic.twitter.com/jEllUHrrxz

But though Peterson believes his artistic ability came naturally, he can’t really explain where his sudden talent came from, as he sketches figures like Belle from Beauty and the Beast, Martin Luther King Jr., and Mark Twain with uncanny resemblance.

​In an interview with KARE-11, Principal Gail Wolfe explained that Peterson’s artistry allows him to form a unique bond with her students: “He’s usually here off hours, so they don’t necessarily see him, but they know who he is because of these drawings.” 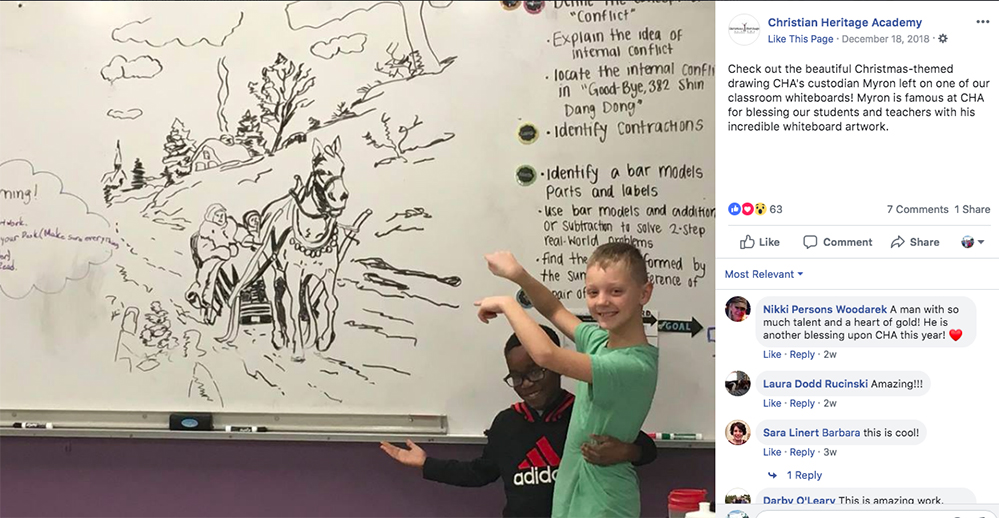